“Siri, show me the weather forecast!” - you ask your device, and the request is immediately fulfilled. And there is no need to dig through the phone yourself to check weather conditions or read the latest news (or whatever!).

It's a familiar situation, and we've all been there, right? Many of us are used to turning to digital assistants to set an alarm-clock, find some information on the Internet, or perform another simple action of the same sort.

This is possible through innovative technologies, which have entered almost every home (and pocket) in the 21st century. And speaking of virtual assistants, these cool solutions not only greatly simplified our daily lives but also became an integral part of most business models.

Interested in details? To be precise, do you want to know various advantages of the integration of voice technology? Then we suggest reading our article.

Some statistics on voice assistants

Let's start with the reasons why virtual assistant app development is a cool idea that would benefit your business. The best thing is to resort to the latest statistics:

But maybe you don't know what we're talking about, do you? What is a virtual assistant, to begin with? Let's get it right!

What is a voice assistant?

In effect, we're talking about special software allowing you to manage an electronic gadget using your voice. Top voice assistants on the market include Siri, Google Assistant, Amazon Alexa, and Microsoft Cortana.

These programs are designed to help the user handle his device and perform simple routine actions without extra effort. In other words, he doesn't need to open the application himself or, say, make a phone call: all he has to do is to give the command to Siri or Google Assistant, and the task will be completed automatically: that is, the app is opened or the phone number - dialed. Also, such software is able to find the necessary information on the network, turn on music, order delivery, remind you about important events, send a message, make publications on social networks, etc. And the list of features is constantly expanding!

A voice assistant in an app is:

Using smart voice assistants is very easy too: they're can be activated with a specified passphrase ("Okay, Google" or "Hey, Siri").

Virtual assistants work on the basis of speech synthesis and recognition technology. They passively read all sound signals, process them, and, if necessary, respond to them.

Let's step through the whole scheme of operation of these programs.

If you want to build your own voice assistant, you have to be ready to face certain difficulties. Wanna know how to avoid them? Then read our article!

The user says a passphrase and gives a voice command. After that, his request is being sent to the server for data processing, which occurs in four stages:

Then the user receives a response to his request: the given command is being executed (let's say, the system dials the phone number) or a search query is being formed, the results of which generate a voice respond (weather forecast, the latest news, etc).

If, after processing the data on the server, the voice-based virtual assistant doesn't understand the command or cannot find the right answer, the system asks the user to rephrase the question or provide additional data (when calling a taxi, the program may ask a passenger to specify his location).

There are special programs (skills) integrated into smart voice assistants, and it is these programmed skilled that help to complete practical tasks: namely, in response to a user command, a certain dialogue (or some sequence of actions) starts.

To activate the desired skill (and force the app to set an alarm-clock, write a message, etc.), a user has to recourse to special voice commands.

How does a virtual digital assistant get its voice?

A number of smart assistants use a synthetic voice with specific settings for timbre, tone, and so on. A striking example is Google Assistant.

However, some other popular virtual assistants are voiced by real people (most often by actors or broadcasters) who have to read aloud a great many typical phrases. And the more phrases have been recorded, the more expressive the voice is going to be.

You may also talk to your user through in-app notifications... Follow the link to get all the details!

Today we, the people, are able to develop a voice assistant app of a sufficiently high level... needless to say, it wasn't always so. We have come a long way to achieve nowadays success.

Maybe it’s time we looked deep into the issue.

How digital assistants have changed over time

The history of virtual digital assistants began almost 100 years ago. Back in the 30s of the 20th century, specialists tried to create technologies for recognizing voices. It wasn't easy: the main problem was the constant noise background and the existence of the so-called homonyms: these are words, identical in sound, but with different meanings.

Today, developers use AI technology and machine learning to overcome such obstacles. The goal is to teach neural networks to analyze the context and identify the main source of the sound. However, it took at least 80 years of preparatory work to make the dream a reality.

Do you want to develop a voice assistant app? We're happy to help with our services!

What to consider during voice assistant app development?

If you really intend to build your own voice assistant and don't want your project to fail, be sure to pay attention to several key factors described below.

The unique name of the voice-based virtual assistant

Of course, first of all, you have to come up with a spectacular name for your program. It should be concise, unique, and easy to remember.

However, the name isn't enough! Also, you need a capacious phrase: the command a person will use to call your virtual assistant (something like “Okay, Google” or “Hey, Siri”);

No matter what is at stake, an elaborate strategy is needed anyway. And if you want to build a voice-based application able to join the list of the best virtual assistants, you won't have a chance to succeed without a tight-knit action plan too (such a plan is usually called a voice strategy).

Of course, you shouldn’t forget about the so-called usability of your application. The main conditions are user-friendliness and intuitiveness.

Alas, even the most popular virtual assistants owned by such giants as Google, Apple, and Amazon are sometimes far from perfect in this regard. Though it is quite excusable, after all, the developers have little experience in creating a convenient voice interface in an app.

Think about what skills your mobile assistant should have, which voice commands it'll be able to perform. In other words, make a list of the app features. And remember, it's better to start small and achieve the perfect result, and then gradually expand the abilities of the personal voice assistant you're working on.

The market is full of diverse services and solutions helping with the integration of voice technology. So study all existing options and find the most optimal one.

However, in order to make virtual assistant app development happen, you had better resort to an expert team. Professional developers have experience in creating applications of various types, and therefore they’ll able to take up any challenge.

If you want people to really use a virtual assistant of yours, pay attention to the target audience. Do your best to figure out what your future user wants, what problems you’re willing to solve with your application. Let that be the basis of your voice strategy (which we've spoken about above). 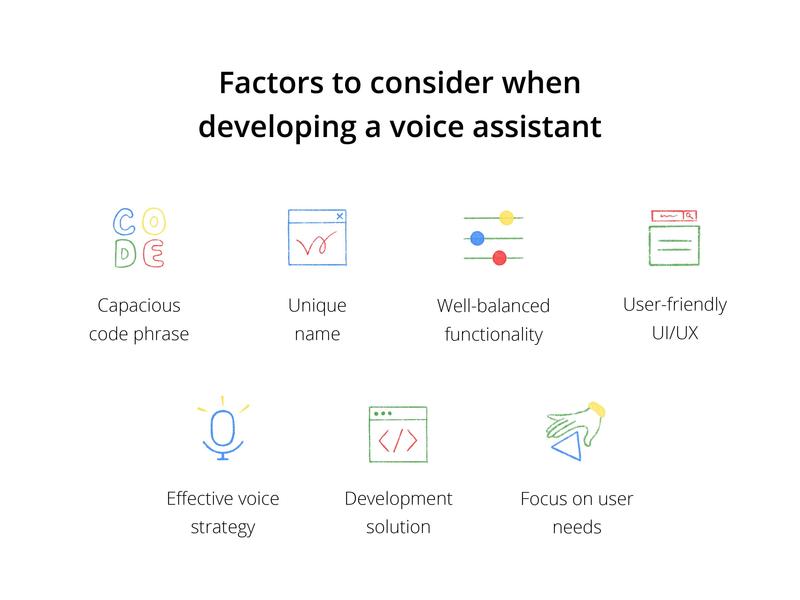 Virtual assistant apps can do a lot, but there are limits to their capabilities either. And you should know in advance what difficulties you may encounter in the development process: these facts might help you think out your voice strategy in a better way.

But technology doesn't stand still, and all these problems are gradually becoming history. According to statistics, artificial intelligence IQ doubles approximately every two years, which means digital assistants are developing at the same pace.

Well then, it's time to discuss the main benefits the integration of voice technology brings to your business.

To understand why the voice assistant in an app leads to increased conversions, let's describe a hypothetical situation.

Imagine: you're planning a trip and choosing a hotel to stay abroad. You open the booking application and indicate the country, city, price range, etc. Then you get a list of different options from which you must choose the appropriate one. And the last stage is, of course, booking a room and paying. In other words, you need to perform a lot of steps. And, as statistics show, with each such a step, the conversion level drops.

Voice commands are another thing altogether! You just say out loud what you want to receive and immediately get the desired. Technologies have come to the point where they can recognize the user's natural request and fulfill his wishes. As a result, conversions are growing.

The must-have of any modern business is to provide a high level of customer service. Therefore, if a company has its own mobile platform (which is also an important condition of success!), it should consider introducing voice technology.

Virtual assistants in business have become indispensable for ensuring decent customer service. The thing is, these solutions can greatly simplify the process of ordering a service or buying a product: as we've mentioned in the previous item, the opportunity to communicate with a virtual assistant by voice is much easier and faster than typing a request using the keyboard.

Another example of the benefits of voice assistants is that these programs are taking on more and more simple tasks, which can partially reduce the company's costs (up to 70%). The savings are due to the fact that business owners need to hire fewer employees and maintain fewer premises.

In addition to saving, the ability to refer part of the work to a virtual digital assistant allows company employees to switch to more important tasks. The result is a great increase in staff efficiency.

The future of personal assistant applications

Modern virtual assistants are capable of a lot of things: they recognize 97% of speech, quickly find information, and analyze it effectively. Besides, they’re easy to integrate into the application. And this is just the beginning! What awaits us in the coming years?

Let's fantasize a little and try to look into the future of voice assistant app development. So…

Interested in high-quality, mutually beneficial cooperation? Then contact our team! We employ the most talented experts in mobile and web development.
Helen Vakhnenko
Next Posts
Offline-First Apps: What You Need to Know About Them
We're used to thinking that an Internet connection is...
Helen Vakhnenko
How to Make a Time Management And Productivity Platform
What is a time management and productivity platform? And...
Helen Vakhnenko
21 Vital Mobile Metrics to Make Your App Better
Wondering what are key mobile app metrics to monitor?
Anastasia Taran