Offline-First Apps: What You Need to Know About Them

According to statistics, more than $1.7 billion is being lost annually due to the low Internet speed or its poor connection. Also, as studies say, if an application (or a website) doesn't load well, almost 75% of potential users would leave it. Still further, more than 45% of these users would never return to the platform that has failed them.

Therefore, today developers must supplement the highly demanded Mobile First concept with another one, which is also gaining popularity: namely, the Offline First approach. Simply put, it's time to think about developing an offline application. After all, you don’t want to lose your would-be users, right? That's what we’ll talk about in our new article!

What are offline apps?

We think you understand that offline mobile app services got such a name due to their ability to operate without the Internet connection. Though, why should they? In the 21st century, it may seem, there mustn’t be any problems with Internet coverage... However, these problems do exist, even in developed countries like the USA.

Don't you believe us? Then pay attention to the infographics below. 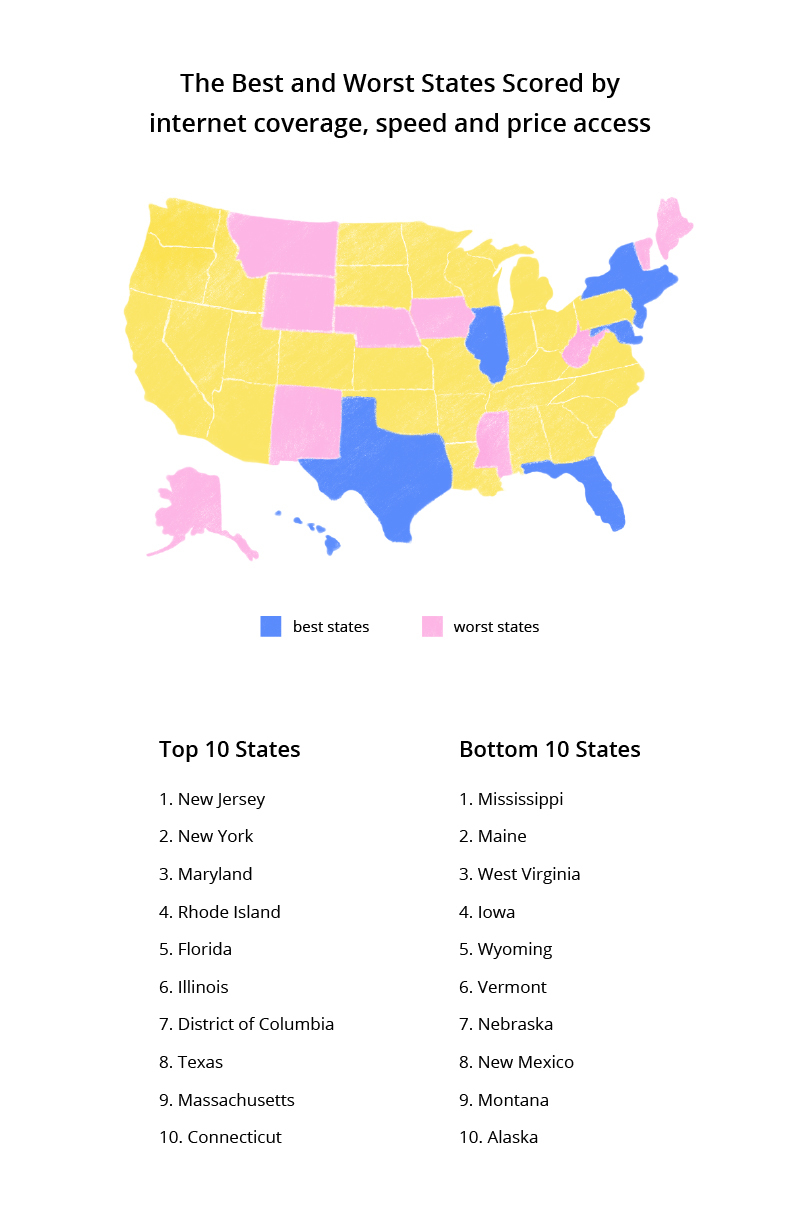 It brings us back to the need to provide our users with the perfect offline app experience. In other words, the application has to work regardless of Internet availability (as well as its speed).

How do offline-ready apps work?

First, let's look at how regular online apps operate. The fact is that the data they’re dealing with is usually stored on the server: this is very convenient since all content is concentrated in one place, which results in the simplified synchronization process. However, such an approach leads to the need for continuous interaction of the user device with the server in question (in order to gain access to the necessary information).

The situation seems to be clear... but it means it's impossible to make an app work offline at a high level, isn't it? In the end, there will be no connection with the server!

Don't worry: the task of building offline mobile applications is difficult but quite feasible.

The thing is, many apps work with data, which doesn't require constant updating. Thus, the device has no need to request new information from the server all the time. It's enough to store part of the content in the application, that is, on the smartphone itself (or another device).

Interested in top-notch online and offline mobile app development? Then click here and read what we're going to offer you.

Let's briefly summarize what you need to consider in order to develop an offline mobile app:

When should you consider offline app development?

It's time to figure out, in which industries creating an offline-first app would be a smart idea. Surely, there are many options, we’ll give only the most popular examples: 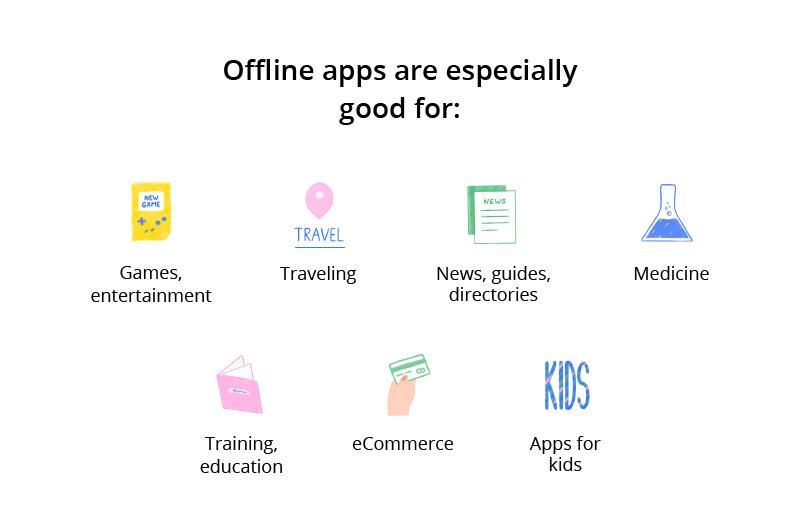 Okay, why should you build an app that can switch offline and online? What are your benefits?

#1 Low internet connectivity is no longer a problem

The first of many benefits of offline app development is the chance to provide users with the opportunity to be independent of having an Internet connection. Thus, they’ll have less reason to remain dissatisfied with the interaction with your mobile service.

The previous item leads to this one. Understanding that the application has online and offline versions, the user is sure he can take advantage of it in any situation. In addition, such an app works much faster (just switch to the offline mode!), which also contributes to user loyalty.

#3 Control over the caching process

Offline mobile applications provide you with a great way to efficiently manage caching steps. Surely, such an opportunity isn’t something to be neglected.

Do you want to know what our experts are capable of? Then acquaint yourself with our Easy Way project.

If you store all the data on the server, you must be sure there is always a powerful network and a stable connection... alas, it's out of your hands to provide these perfect conditions. Though, you may solve the problem by building an offline-first app: thus, you get the opportunity to update information on the server as necessary (and if possible).

An offline app loads faster since it doesn't depend on the server operation or the quality of the Internet connection. And the user can enjoy your mobile service wherever and whenever he wants.

The above benefits of creating an app that works offline, namely, ease of caching, fast program loading, efficient data storage management, result in the device’s battery saving. This is especially helpful in cases if a user isn't sure he would be able to find a place to charge his smartphone during the day (say, he is traveling abroad).

Apps that work without an internet connection are always ahead of their competitors. Of course, any customer would prefer the program offering him more features and better working conditions (including the possibility to use the application offline).

Wondering how to develop a quality GPS app? Okay, let's figure the issue out!

By the way, speaking of competition… Let's discuss your most successful rivals who resorted to offline mobile app development and didn't regret their decision.

Take a look at the below examples of offline apps; they might inspire you to create something of the sort too.

Spotify is a world-famous music application you’ve probably heard about (maybe you used it too?). It gives access to a huge number of songs for every taste. What's more, you're allowed to set the offline mode and listen to your favorite tracks even in the absence of the Internet.

The Amazon Kindle is a great reader application with online and offline versions. Among the advantages of the service, there are the following options:

As to reading apps... what features are essential to them? Learn the answer from our article.

Among the popular examples of offline apps,  TripAdvisor, a very special travel program, should also be mentioned. It offers many useful features allowing tourists to travel expertly. And most importantly, TripAdvisor provides offline access to a number of options, including detailed reviews, maps, and images (which is true for more than 300 cities).

Although Google Drive is one of the world leaders in cloud storage services, it took care of offline support too. A user just has to turn on the option of access to offline mode, and he'll be able to work with the file regardless of the availability of the Internet (naturally, synchronization with cloud storage is also provided).

The name is very eloquent, isn't it? Undoubtedly, the program belongs to the number of offline mobile app services.

The Offline Dictionaries application has a huge database with all kinds of words, phrases, idioms, and synonyms and supports more than 50 languages. And, of course, the traveler can use the app without worrying about accessing the online mode (he just needs to download the languages of interest to the device).

In the past, the offline version of Google Maps left much to be desired. Fortunately, the company improved its service, and the updated Google Maps has an intuitive, user-friendly offline app design and advanced functionality (which is available even without the Internet connection). The user is allowed to download detailed city maps and take full advantage of them in the offline mode conditions; what’s more, these maps will be automatically deleted in a month (such an approach helps to avoid the situation of overloading the device’s storage without a real need).

Let's discuss the best way to build a local search app. It might come in handy in many cases!

Problems you may face when developing offline mobile apps

Offline mobile app development isn't an easy task and involves a lot of difficulties... which ones and how to overcome them? Let's take a closer look at them!

When working offline, your application cannot use updated data stored on the server. However, when the Internet connection reappears, the program must synchronize the information… which isn’t as easy as it might seem!

On the one hand, an offline mobile app cannot always download absolutely all the data if there is too much of it. On the other hand, the application has to send its own information back to the server (if the user has made any changes during the period of the Internet’s absence).

So what do we have? Firstly, your program mustn’t be using an outdated, irrelevant database. Secondly, overloading the smartphone’s storage with unnecessary information would be a wrong move too. Therefore, you have to find a middle ground, the perfect balance enabling the service to work efficiently, quickly, without failures. And all of this complicates the offline app development process.

The second difficulty developers face when building offline mobile applications is the search feature. And there are several key aspects:

Are you ready to start? Then let’s consider your development options!

Of course, there are various offline app development software and ready-made templates, which you can use. However, if you intend to achieve the perfect result, consider building an offline-first application from scratch. Creating a platform from square one is always longer and more expensive, but it has a better chance of success. The choice is yours!

As you see, the benefits of offline-first apps are worth the effort. If we’ve convinced you, click here. It’s time to discuss your project!
Helen Vakhnenko
Next Posts
Vehicle Tracking App: How It Can Help Your Transport...
You have your own fleet, and you’d like to increase its...
Helen Vakhnenko
How to Build a Money Manager App Like Digit
Follow the link to learn all about Digit app and its...
Helen Vakhnenko
21 Vital Mobile Metrics to Make Your App Better
Wondering what are key mobile app metrics to monitor?
Anastasia Taran