Country
Home   →   Blog   →   How Much Does VR Application Development Cost?

How Much Does VR Application Development Cost?

Virtual reality development has changed the idea of the impossible! The future is literally here. Today, ordinary video games no longer impress anyone. To take our breath away (in a good way), you need to use the most innovative digital solutions and thereby turn the fantasies of science fiction authors into reality.

And while new technologies are making the lives of some of us more fascinating, they’re also helping others win all users' hearts and earn money. And if your business is already app-focused, it's time to think about supplementing it with a VR effect.

Of course, the task isn't simple and might require some financial investments; you'll have to spend a fair amount of money to create one of the great VR apps… but the game is worth the candle.

To help you plan your budget, we've written our article. We hope these tips will help you figure the issue out.

Where Can You Use VR App Development?

By initiating virtual reality development, we create a colorful, realistic in the provided sensations, three-dimensional world, of which the user himself becomes a part. Surely, the embodiment of such a daring idea requires external tools, sophisticated devices. Among them are smartphones, special glasses, 3D video cubes, VR rooms, and the like.

Sounds complicated but the effect is truly impressive: a person believes that he is in an unknown reality, he sees what we want to show him.

Virtual reality is by no means the only innovative option for your app. Another one is AR. Wanna know more? Click and read!

We, humans, love unusual digital innovations, especially if they provide us with a new and unique experience. And virtual reality technologies are just the thing to enrich our life with extensional and vivid sensations. That's why they’ve become so popular lately.

And by the way, VR apps can be safely and successfully used in almost any scope of activities, all you have to do is let your imagination run wild. 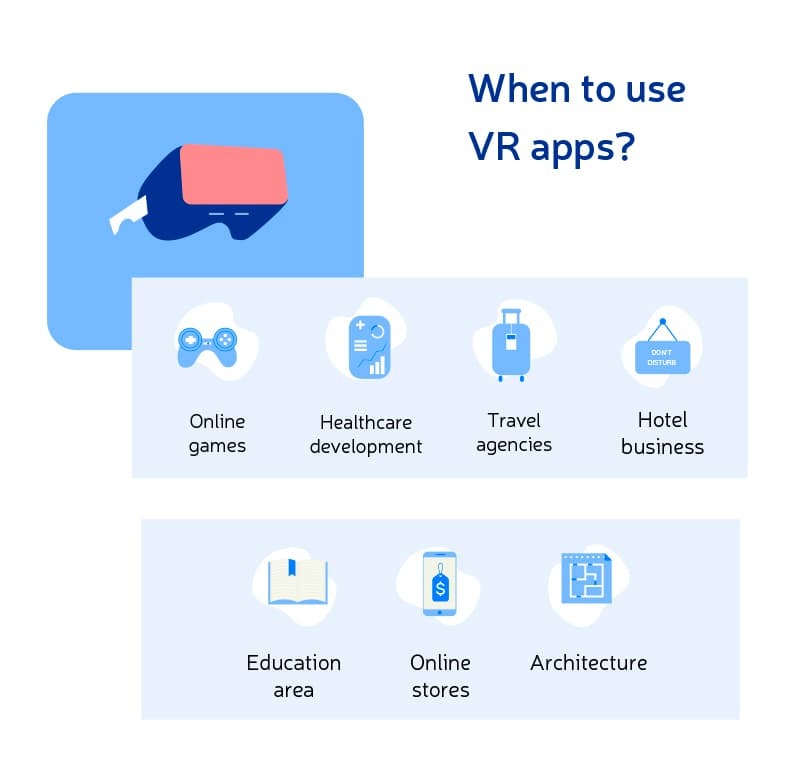 Undoubtedly, virtual reality application development is a new level of innovative achievements which opens up tremendous prospects. Agree, the idea to expand the human consciousness by taking advantage of its hidden resources heats the imagination.

And if we haven't persuaded you to hunt down a question of how to create a virtual reality app, here are a few prime examples you may find more convincing.

Why is it beneficial to build virtual reality apps?

Of course, youэre also interested in the iOS and Android VR app development costs, and we’ll certainly satisfy your curiosity. But first, we’d like to answer another important question, namely…

How to earn money on the virtual reality app?

In short, the system is quite simple: either you are trying to find proper advertisers (sponsors using your virtual reality development software as an advertising platform), or you offer a user a free basic functionality with the right to access other features for a modest fee. It can be implemented in the form of built-in purchases or a monthly subscription system. 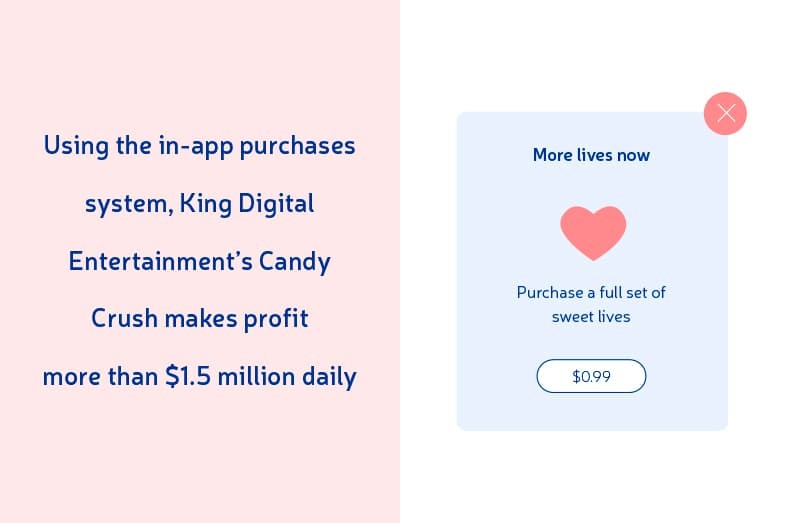 The Google name speaks for itself, and its apps are the first ones in the list of recommendations to any owner of the VR headset.

The official YouTube application provides you with a great chance to see the charm of exquisite US national parks or visit concerts and excursions shot by the Video360Production project team. And, which is more, Google Street View will “transfer” (in a manner of speaking) a user to anywhere in the world (if, of course, the place has already been imprinted in a panoramic photo).

In 2013, one of the app creators had visited the Zion National Park and realized that he’d like to be able to return there again - at any time from anywhere in the world. Such a desire led to the development of the Jaunt application, the aggregator of videos in the video 360 format. The main requirements are maximum realism and the effect of immersion. All of the videos are conveniently divided into categories: sports, news, music, travel, and so on.

The service belongs to the highly popular VR apps. It has been collecting the videos of the Within company.

And by the by, Within offers not only a documentary to watch: in the application, you'll find videos of other genres too (among them is a psychedelic music video Stor Eiglass).

The New York Times newspaper has brought journalism to a new level: the editors decided to expand the standard toolkit of the reporter so that the viewer could go directly to the center of events - for example, to watch the assault of the Fallujah city of Iraq in June 2016. 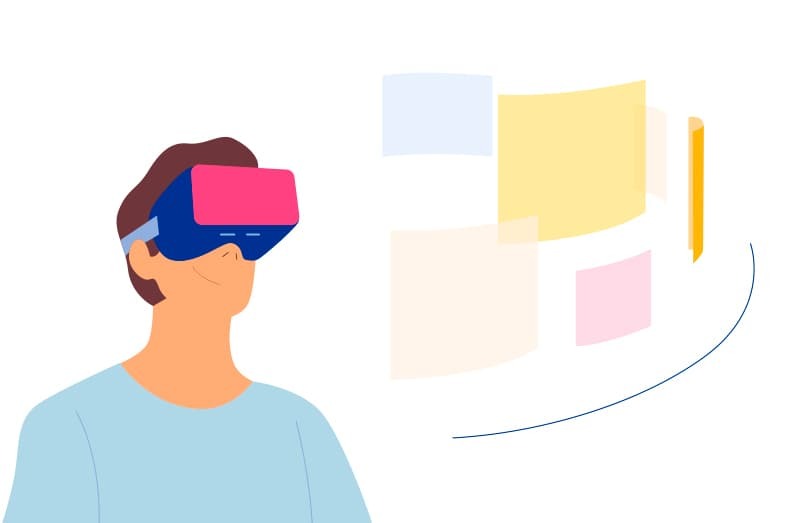 So, what's the best virtual reality application among the above ones? It's difficult to give an exact answer, all the aforecited examples look really cool, right? Also (who knows?), your program might be able to win an even greater audience.

Anyway, if you want to join the ranks of these awesome VR apps, these clear market leaders, you have to learn how to make a virtual reality app.

But where should you start?

You should start by filling out the brief provided by one of the virtual reality applications companies. Your task is to describe in detail how you see your future mobile service, which is going to join the ranks of new VR apps.

This information will help the experts you hired to better understand the needs of your project. In the end, it’ll greatly simplify the process of virtual reality technology development.

When describing the requirements for your project, answer the following questions:

So, summing up: a clear description of the task leads to your getting exactly what you expect.

Well, now it's time to move on to the most interesting issue, namely, the price for virtual reality Android/iOS development! So…

Let's analyze in stages the main factors, which influence the VR app price (the cost to create it, to be specific).

#1. The reputation of the virtual reality development companies

Of course, the more experienced application developers are, the more money they ask for their services. And their expertise inevitably affects your final costs… but, on the other hand, the quality is also better (given the qualifications!).

And if you want to save money, stick to the middle ground. Don't pursue prestige and reputation alone, focus on quality (make sure to explore the proposed portfolio of completed projects).

Also, keep in mind the company location. Specialists from a country with a high living standard have more demands - it’s only natural! Alas, their wishes regarding their own earnings don’t always positively influence the quality of work. And, in fact, finding a contractor with the same experience but lower rates (due to the location factor) is not such a problem.

Therefore, if you have a limited budget, hire experts from Eastern Europe: their rates are quite moderate, and the level of work is still high.

But Eastern Europe is rather large, which country to choose? We advise a Ukrainian team: Ukrainian developers are very skilled and efficient, and their rate fluctuates around $ 50 per hour (give or take). Of course, Indian experts are even cheaper, but the quality of services doesn’t always correspond to the stated.

To make sure we’re not unfounded, compare the rates of developers from different countries. 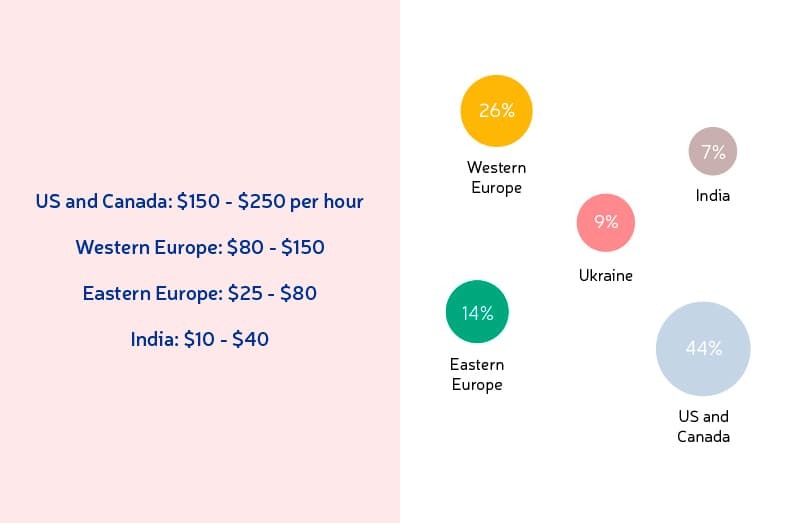 Virtual reality applications cannot be cheap, their implementation requires certain professional skills, and not every developer is qualified enough to create such a difficult mobile service. However, the concept of high cost has different degrees. Let's discuss it at length!

The most reasonable way to reduce the budget is to exclude all features, without which your application would work no less efficiently (just make sure it still appeals to the user).

When developing virtual reality applications, one should focus on the following platforms:

Ideally, your goal is to create a VR application that supports any platform the user chooses. However, keep in mind that this also affects virtual reality app development costs.

The most affordable option is a project with a fixed price (namely, you have an approved budget, and in no case should you exceed it). Of course, this version of payment has its drawbacks. And the main one is that both you and your developers are rather limited and cannot come up with new bright ideas. You'll have to list all your requirements beforehand. Alas, there is a risk that other VR apps will turn out to be better than yours... especially if their creators could afford to spend more money to implement some unique features.

So if you’re willing to pay for higher quality, it’s best to choose a more flexible pricing system based on the specifics of your particular project. Think about how your application should look like in order to meet your expectations and fulfill the tasks assigned to it. Consult with a hired professional team, let its experts advise you on how best to translate the idea into reality. In such a case, obviously, it’s impossible to determine the exact application development cost, but it can be said with certainty that your VR service would benefit you.

What experts do you need?

We've settled all the preliminary issues, now it's time to proceed to the main question: how much does VR application development cost? Let’s summarize…

How Much Does a VR App Cost?

In general, virtual reality application development takes from a month to several years. As we said, it all depends on your basic requirements. The more complex the program, the more time its implementation should last. Of course, the final price would also be higher…

We guess it would be reasonable to describe basic development steps. It'll provide insight into the matter:

Having made all the necessary calculations, you’ll know what budget you need. And we can help you by providing the following figures:

Let's assume you've successfully completed virtual reality application development. "That's it!" - you think with relief... but it's too early to relax. You should continue to work hard on your service (as we mentioned above). Here are some activities to keep your project in demand

So, now you know almost everything about how to create a virtual reality app. Are you ready to take risks and improve your business through unique VR technologies? Then don’t hesitate, order our app development services right now! Our company employs only highly professional specialists who are keen on their business and willing to take up a challenge.

We guarantee you a successful app development and mutually beneficial cooperation.