If you want to create a web app, you have to decide what it is going to be like. And it's not only about functionality but also about the development approach.

As it happens, in addition to traditional multi-page resources that you probably know very well, there're single-page applications either. Being built on a different principle, they’re in some cases the best choice (although by no means always).

Let's discuss this topic in order. We'll look at the pros and cons for SPAs and MPAs and figure out your perfect business strategy.

So, single-page apps versus multi-page apps... which one is better? What should you choose?

Web applications are becoming more and more popular. Being located in the cloud, they function seamlessly on all devices, which is convenient for the user.

Traditionally, web apps link together several static pages, and when the user moves from one to another, the content is completely updated. This is the so-called MPA model, which we’ll discuss below.

At first, everyone was happy with such an approach, but later some problems emerged. In particular, it was discovered that if an application was processing too much data or had a complex user interface, it slowed down. Developers did their best to fix the situation, and in the early 2000s, they improved multiple-page applications using AJAX, which allowed updating the content partly. Thus, the performance of the website had been improved, but not without side effects (among other things, the online page had become more complicated).

After 10 years, the SPA pattern was created, which was an evolution of the “MPA + AJAX” pattern. SPA requests the page layout and data separately and renders the results directly in the browser. All this became possible thanks to new front-end frameworks (AngularJS and the like).

Have you ever heard of NDA? And do you know when to sign such a document? We’re ready to tell you.

And now let's discuss both types of web applications in more detail.

What Is a Multi-Page Application (MPA)?

We're most familiar with multi-page applications or websites, we deal with them every day, all the time. And their functioning principle is clear to us. 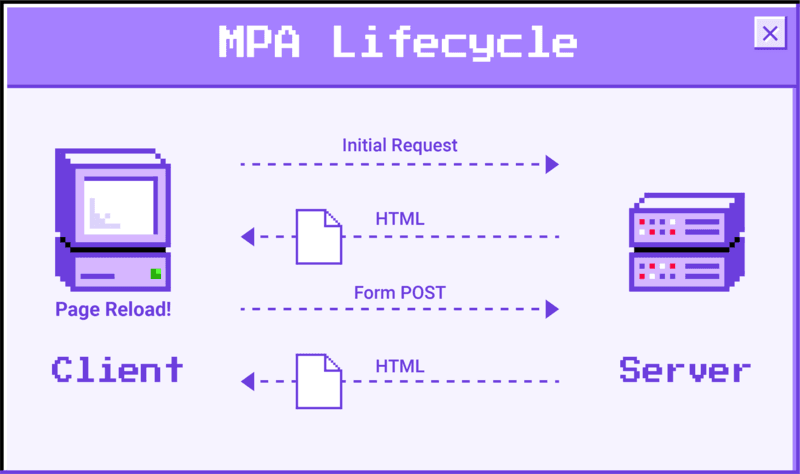 As we explained, these web applications are more traditional in architecture. When a user clicks on a link to another page, the latter sends a request to the server and completely refreshes all data, even if there is very little of it. To be precise, each request leads to a 100% page reload. As you can imagine, it affects the speed and performance of the resource.

Surely, developers are finding ways to somehow improve the situation. Among others, they use different JavaScript/jQuery tools to reduce the load on the site. One example is online store filters: when a user sets his wishes for the search results (let's say, he specifies the brand, color, size of the desired item), the product list is updated without reloading the page.

Alas, not each problem can be solved so easily. Therefore, sometimes developers decide to build a single-page application.

However, let's discuss the advantages and disadvantages of this type of apps in order.

Pros and Cons of Multiple-Page Applications

Now we’re ready to discuss MPA cons. They include:

What Is a Single-Page Application (SPA)?

A distinctive feature of SPA is that such a web application is 100% interactive, although it is located on one page. Let’s say, an online information resource might consist of one page too but it doesn't mean it has something to do with SPA.

Here's an example to convey the idea of a single-page app. Imagine the following picture: you go to a website, open one of its tabs, and wait for it to load. Realizing that this isn't the page you need, you go to another and wait again. Annoying, isn't it? So, the SPA helps to solve the problem.

The SPA concept implies that the user stays on the same page, switching between tabs. The content of the resource is only partially reloaded, and the site works faster.

Languages in which SPA is written

The main language to make an SPA is JavaScript. If it's about a small resource, then the jQuery library will come to the rescue. However, if your project is larger, we recommend using other frameworks including React and Angular.

As we've already explained to you, the SPA architecture is designed in such a way that when you go to a new page, only part of the content is updated. Some elements are always the same and don't need to be reloaded every time.

Wondering what makes this possible? Let's explain to you!

The point is, when the website is first loaded, the server sends all the required code to the computer (or another device). Further interaction with the server occurs through AJAX requests, and the page layout is being generated on the client-side. So the content can be updated without a full page reload. 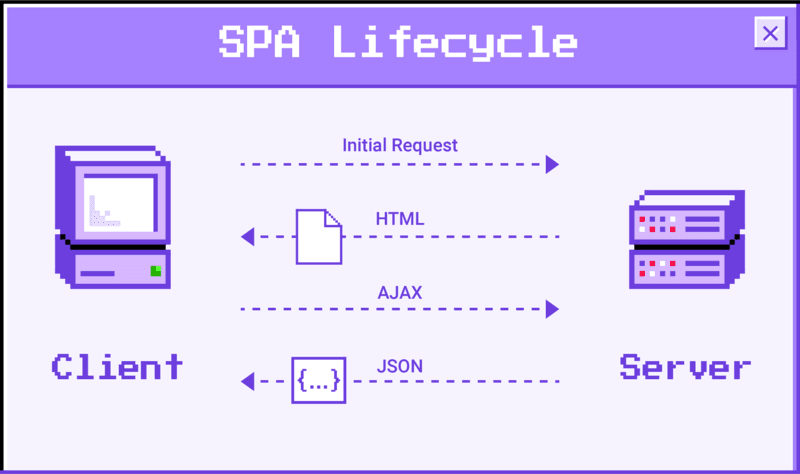 In other words, after the first page load, the user receives only the data itself from the server, and the data view comes from the cache.

How does a Single-Page Application Work?

In the case of traditional MPAs, the user opens a new page to access its content. But when it comes to SPA, the situation changes, and users interact with different states of the same page.

Pros and cons for SPAs

As always, let's start with the good and tell you about the key advantages of single-page apps:

The SPA type of apps has its cons too, we can't escape it, alas:

We've discussed the pros and cons for SPAs and could move on to the next topics. But first, we'd like to touch upon another issue, which is closely related to single-page applications.

PWA is the next level of SPA development (although also not devoid of disadvantages). PWA can do everything that SPA is capable of and has a few more cool features.

Most importantly, you may install the PWA on your phone and run it the traditional way, from your desktop screen. Roughly speaking, you have not just a website, but a real cross-platform mobile application! It even works offline (with some limitations). 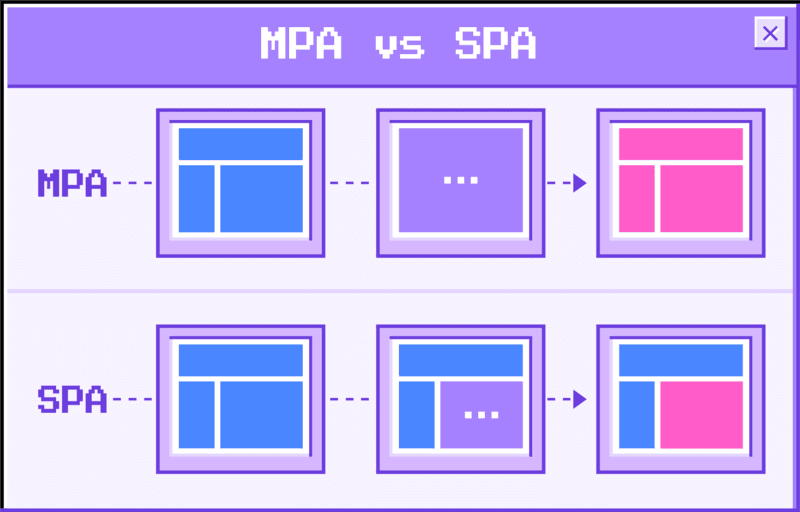 Both multi-page and single-page application architectures have their pros and cons (which you obviously already understood from our article). The final choice depends on the specific project.

So let's reason. SPA is fast and offers the ability to seamlessly create a mobile application using ready-made code. On the other hand, it has poor SEO optimization. Thus, SPA architecture is an excellent choice for projects with complex interface and functionality, such as:

On the other hand, if your company provides a large number of products or services, you need to use a multiple-page application architecture. It is good if you have...

But remember, although the MPA can be optimized to make the resource work efficiently, you won't be able to build a mobile application as easily as you would in the case of SPA development anyway.

How about a hybrid web app?

You may have an idea to combine MPA and SPA architectures (although SPA, as you remember, has become a kind of new stage in the development of MPA applications). Why not, after all?

Well, such an option is quite possible, but you need to be clearly aware that you run the risk of creating an application, which has flaws of both patterns. Among other things, the web app can turn out to be slow, since some of the pages will have to be generated on the server, and to implement the SPA part, you'll need to install client frameworks.

Any project should start with writing a business plan. But how to approach the task in question? Let's discuss it!

But the idea to combine both types of web applications isn't as bad as it might seem. Such an approach is sometimes implemented in practice to varying degrees. For example, the main part of the resource can be multi-page, while the personal account is based on SPA. However, this is by no means a full-fledged hybrid of SPA and MPA.

But still… Let's be specific. What should you choose in the end?

Summarizing what to choose

The choice of SPA is advisable if:

The choice of MPA is advisable if:

How to make an SPA or MPA

The main development stages include:

But if you want to build a single-page application, there are a few more important things to consider:

Development costs depend on the following:

A web application can be as complex as you like, which means it's impossible to give an exact project price. But we'd like to tell you what to focus on when forming a budget:

To provide more accurate data, we need to know what type of resource you have in mind.

And now we’re going to give you some real-life examples of SPA and MPA.

All of the web apps we've listed could do even without SEO optimization. However, not each resource would be able to afford it.

We explained to you that if your project is related to the sale of goods or the provision of services, then it is better to create a multiple-page application. That's why e-commerce giants such as Amazon and eBay are among the MPA examples.

They chose this development model in order to fully leverage the SEO tools and be able to continually scale their project.

As you understand, it all depends on your business and its goals. You must analyze your project and only then decide which development approach to choose.