NDA for App Development Outsourcing: Does it Really Work?

“I want to protect my app idea. How can I do this?"

The easiest way to achieve the goal in question is to sign the NDA for app development. But how far-sighted is such a step, though? Is the game worth the candle?

We answer these and many other questions in our new article. Read it if you want to understand what a non-disclosure agreement is and how to conclude one. We'll help you figure out how to avoid unnecessary conflicts and stop worrying about information leaks.

Okay, let's get to the point then: how to protect your app idea? Where to begin?

The NDA is a legal document that restricts the dissemination of information, which, under the terms of the agreement, can only be used by people who have signed it. The standard NDA describes in detail which data is confidential and defines the responsibility for its disclosure.

The need to protect confidential information is especially important when developing digital products because in this case, data leakage can cause serious financial risks.

The main tasks of the NDA:

What is confidential information?

Non-disclosure agreements cover any type of information, including:

Pros and cons of the app development non-disclosure agreement

Let's list the main cases when you have to enter into an NDA (non-disclosure agreement):

And now about the main thing: do YOU personally need to sign an NDA?

The answer is yes if you have an interesting digital project idea, which you want to bring to life. You're confident that your product will be popular in the market, but only if it happens to be one of the first of its kind. How to protect your app idea in such a case? Of course, with the help of the NDA, which obliges developers not to disclose information to your competitors.

Do you need an NDA for StartUp in IT?

First of all, an NDA is very useful for certain aspects of how a technology startup works. This is a legally binding agreement that protects the intellectual property of the entrepreneur in terms of preventing unwanted disclosure of the startup idea. Therefore, it is necessary to sign an NDA for the purpose with each employee or contractor of a startup in order to ensure the legal security of the entrepreneur in the event of litigation.

Any NDA must specify the nature of the confidential information to be disclosed. This must, however, be done without actually disclosing the information, so sensitive information is usually described in categories. For example, a contract might include PHP code, a database, and proprietary development techniques. It is important for the Receiving Party that the definitions are not generic but clearly describe what you will actually receive. Something like "all relevant business information" is too broad a definition and should be avoided.

In the field of IT startups, information security is in the first place, so there is a need to conclude a detailed confidentiality agreement. The parties are, as a rule, the customer and the contractor or two business partners who agree not to disclose confidential information or trade secrets that became known in the course of their cooperation. Thus, guarantees are established against unfair competition on the part of the counterparty, which can potentially use the information received for its own commercial purposes.

A separate contract or a clause in the general contract? An NDA can exist not only as a separate document but also as part of a general agreement governing relations between the parties (for example, a software development agreement).

What types of information should be included in an NDA? The NDA must define the following:

Are you hiring an accountant who will be aware of your sources of income, expected profits, and growth rates? The conclusion of the NDA will ensure that your competitors cannot accurately assess your potential and prevent you from achieving success.

What to Consider to Properly Protect My App Idea?

There are two key points to keep in mind.

You have an app or website idea, and you're sure that it's unique ... but you may well be wrong. After all, there is nothing new under the sun. Therefore, there is a risk that the development team will undertake, in addition to your project, another one similar to yours in essence. As a result, your product will appear on the market at the same time as the competitive one. If you want to avoid such situations, create a clear business plan in advance.

By the way, in another article, we've described at length how to write the perfect business plan. Follow the link to read our tips.

Of course, reputable IT companies never undertake similar projects. But these things need to be discussed anyway.

Sometimes contractors fail to protect the mobile app development idea without malicious intent, it can happen by accident or through oversight.

And we're ready to give a striking example of this kind of omission. Moreover, that's the Apple company itself!

The bottom line is that a few years ago Apple fired its employee (Ken Bauer), whose daughter posted a video on YouTube showing several new features of the iPhone X. That'd be okay, but iPhone X was still in the testing process.

Ken Bauer removed the video at Apple’s request but it was too late: it managed to go viral and had already been watched by a huge number of users.

The conclusion is simple: when drafting an app development non-disclosure agreement, examine various options for information leakage. Let's say an IT company could publish a post bragging about starting a new project or place your logo in the Our Clients section. You never know!

Let's say you have a great app idea. What to do next? How to make it a working product?

We suppose we should explain to you what you should include in your NDA to avoid any misunderstandings.

What to Include in NDA to Protect Confidential Information?

#1. Confidential information to be protected

As the saying goes, "This is it!", the main clause of your agreement. To be precise, first of all, you should determine what exactly relates to confidential data. What are you going to protect?

"I want to protect my app idea!" - you might say. However, the app idea is a rather vague concept, lacking in specifics. You need to give real and concrete examples of confidential information (for example, all data stored in the company's cloud storage).

You also have to know the difference between confidential and commercial information. Many people think they are the same thing, which is wrong.

Sometimes it's useful to supplement your contract with a clause clarifying which data isn't confidential. This will allow the parties concerned to better understand what kind of information should be kept secret.

Non-confidential information usually contains material, which is already publicly available or identified by the contractor from third party sources.

#3. Parties to the non-disclosure agreement

It's time to discuss the parties to your contract, namely:

Okay, you've contracted to protect the mobile app development idea. But how long should the experts you hired keep the data secret? A year, two years, a decade?

Of course, you must discuss this clause when drafting your NDA.

#5. Acceptable use of the data provided

If the data you've provided to the order executor is so valuable, why share it in the first place? Maybe you'd better hide your information, what do you think?

“But I want to have my application developed, so I should hire someone to do the job!" - you're likely to answer us.

And you actually have a point! That's why you must validate your app idea.

And let us give you one piece of advice: describe in detail how your contractors are entitled to use the information received. If necessary, list all the tasks assigned to them.

#6. Conditions for the information transfer

In some cases, when drafting the NDA for app development, it's useful to indicate how you plan to communicate data to your contractor.

#7. Definition of the information disclosure concept

What do you consider to be illegal disclosure of confidential information? Define this concept and label it in your agreement.

Usually, it's about the sale of data, the intentional or accidental transfer of information to third parties, etc.

#8. Cases when information disclosure is allowed

"I want to protect my app idea, and therefore you have no right to disclose information to anyone!" - that's your intention when signing the NDA, isn't it? However, there are situations when the order performer has no other choice but to give out the information received. And he (or she) can't be blamed!

Usually, the case in hand is communication with government agencies, courts, and other similar organizations. As you understand, these authorities can force anyone to disclose even the most confidential data.

To avoid all sorts of misunderstandings in the future, we advise you to initially indicate when the disclosure of the information isn’t a violation of the contract.

When the contractor has completed your order, he must, in one way or another, return all the information received (as far as possible, given the popularity of cloud storage).

So the penultimate clause of your agreement should discuss this very issue.

Let's say your contractors failed to protect confidential information. What to do? What should they expect from you, what sanctions?

You may have your own ideas of punishment, surely, but most often one resorts to paying damages or imposing fines. 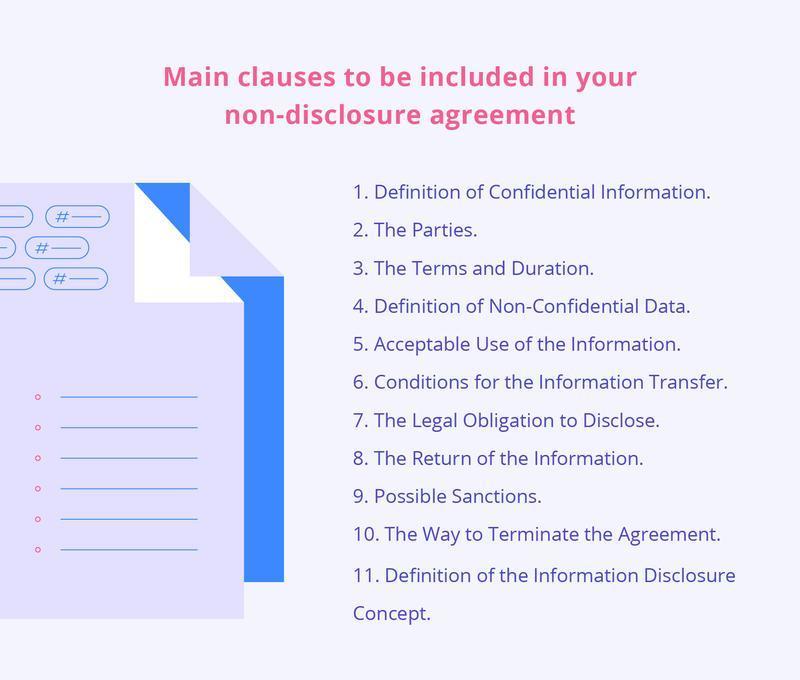 When to Refrain From a Non-Disclosure Agreement?

Signing an NDA isn't always the best way to act. On the contrary, sometimes the decision to conclude such an agreement can lead to large financial losses.

Most often, the NDA doesn't work if your digital product is too original and uncommon. Oddly enough, but uniqueness is far from being a guarantee of your project’s success.

The whole picture is rather simple. Let's say you've decided to create a new application, and you're 100% sure it has no analogs on the market yet. And, of course, you're afraid of competition, you want to be the first to release such an app. That's why you'd like to protect the mobile app development idea by signing the NDA.

And why not? It makes total sense, right?

Unfortunately no, it doesn't. In some cases, the competition will do less harm than launching an a priori losing product. After all, you may think your mobile service is cool and likely to attract a lot of users, but what if you're wrong? Any new app idea needs to be tested thoroughly. You should first conduct a detailed analysis of the target audience, interview the focus group, and take other similar steps.

Naturally, all of the above activities are impossible in a state of complete secrecy. So it's better to postpone the signing of the NDA.

How to Protect Your App Idea and Avoid Basic Mistakes?

Sometimes the conclusion of the NDA for app development doesn't bring the expected results. And usually, there are quite understandable reasons to explain such a sad outcome, including:

Let's summarize the above briefly:

We know how to protect your app idea and have huge experience in working under NDA. And we're happy to discuss all related issues.
Helen Vakhnenko
Share
Get in touch
Send us your comments, suggestions, questions, or feedback.
Next posts
Mobile App Analytics Tools You Need to Use for Growing Business
Helen Vakhnenko
Microsoft Teams as a Collaboration Platform
Helen Vakhnenko
Write a Successful Business Plan for your Mobile App Idea
Helen Vakhnenko
Services
Expertise
Technologies
Insights
Success Stories
Company
Careers
Blog
Contact