At times, each of us craves a fresh dose of inspiration. Surely, there're many ways to get it, and one of them is to browse through bright pictures... after all, we, the people, are visuals and perceive the world with our eyes!

A good way to find cool inspirational images is to use websites and apps like Pinterest. You just have to clarify the theme you prefer (say, Art, Architecture, etc.), and the resource will offer you a lot of great options.

That's why Pinterest is growing in popularity day by day along with the number of images in its database. Judge for yourself: in 2020, the resource could be proud of more than 300 million monthly active users around the world (which is hardly the limit). Isn't it impressive?

Moreover, the Pinterest platform is being successfully monetized: in 2019, the site's revenue had exceeded $ 1 billion. The fact is, some of the aforementioned users are businessmen who resort to Pinterest to promote their own company, and they’re ready to fork out to achieve this goal.

We guess it makes total sense to create a Pinterest clone application or website and start earning money too, what do you think? If you don't mind taking the risk, you'll have a real chance to get your slice of cake as well.

The task isn’t an easy one, though. So let's talk it through and discuss how to become a worthy competitor to Pinterest.

Another cool nuance: Pinterest came up with its own names for everything. Images are called pins, and the collections in which they are gathered are boards. Figuratively speaking, the images seem to be attached to virtual boards with pins (hence the Pin name) and put on public display. By the way, the main page on Pinterest is known as Pin Feed.

So, we've briefly discussed the interface of Pinterest, now it's time to move on to other topics.

Who can use Pinterest-like apps and websites?

Pinterest users are divided into 2 main groups. We offer to discuss each at length.

By developing a Pinterest alternative app, you clearly have a goal of making money in mind. Therefore, you need to attract the attention of businessmen (on the model of the same Pinterest).

Yes, Pinterest is a handy business marketing tool. The resource allows effectively advertising and even selling a product, finding partners or suppliers. These additional services are paid, but worth it. To be precise, the owners of Pinterest get their profits, and the entrepreneurs promote their company: 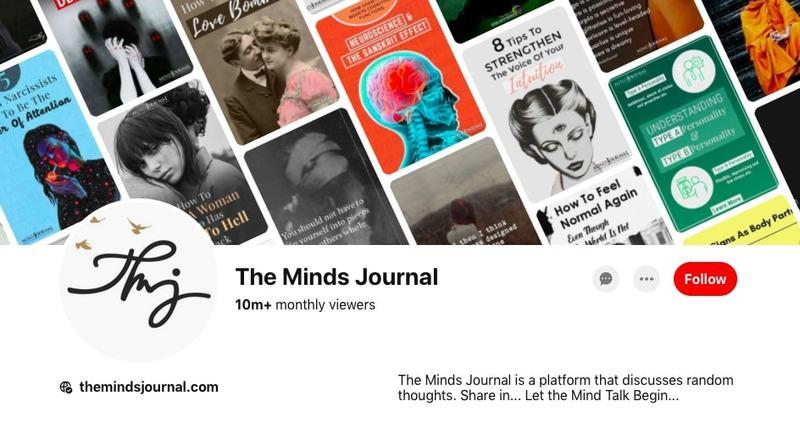 If we've convinced you that creating an app similar to Pinterest could be a profitable idea, let's take a look at how your potential competitor approaches the way its web and mobile service works.

As we’ve already explained to you, Pinterest resembles an endless board with many beautiful images pinned to it. Each user is free to create as many boards as he wants and fill each with thematic pictures.

In addition to creating different albums of images, users can repost (or rather, repin) pictures they like and publish them on their pages. 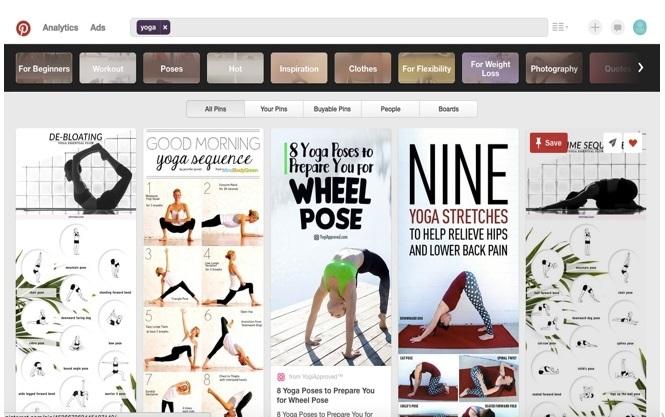 What if you’re a businessman?

Of course, a Pinterest-like website and app should offer a few more steps for people who want to register a business account, such as:

Pinterest was founded in 2010 by three young IT experts. More correctly, the development itself began in 2009, and in 2010 the first beta version was released.

Alas, the guys were unable to stir up users' interest, people weren't too willing to take advantage of the unknown resource. But it was too early to despair.

Especially since everything had changed after one of the founders of Pinterest attended the women's conference of bloggers: these female influencers were delighted with the new exciting service. They decided it could be the perfect place to exchange recipes, fashion items, interior design ideas, etc.

“This is who should become the core of our target audience!” - the founders of the company understood, and thus laid the foundation for the resource, which inspired so many Pinterest alternatives in the future.

Initially, the pin feed featured the most popular posts based on user subscriptions. Such an approach helped attract like-minded people but was insufficient to ensure real Pinterest’s success. So the service owners changed their strategy and introduced algorithms for analyzing user behavior in order to offer each subscriber something personal able to captivate him.

Here are a couple more facts to help you understand what kind of competitor you'll have to face after developing an application like Pinterest:

The growth and evolvement of the resource continue to this day. Among others, in the first half of 2018, Pinterest introduced several new features, including archiving boards and sorting them according to different parameters.

Apps like Pinterest are essential because not everyone has the opportunity to use a fully-featured website. Realizing this, the owners of Pinterest had created an intuitive and user-friendly mobile platform. Its interface is simple and clear and has nothing extra. What's more, users have access to all the features of the web version of the resource.

The Pinterest application was launched a year after the website release and initially focused on iPhone users. Other mobile versions appeared later.

Pinterest is a niche site aimed at women. In our article, we explain why these resources are beneficial to businessmen.

And what can Pinterest be proud of today? Pay attention to the statistics below and find out everything first-hand. Such data will guide you in developing a Pinterest alternative app. 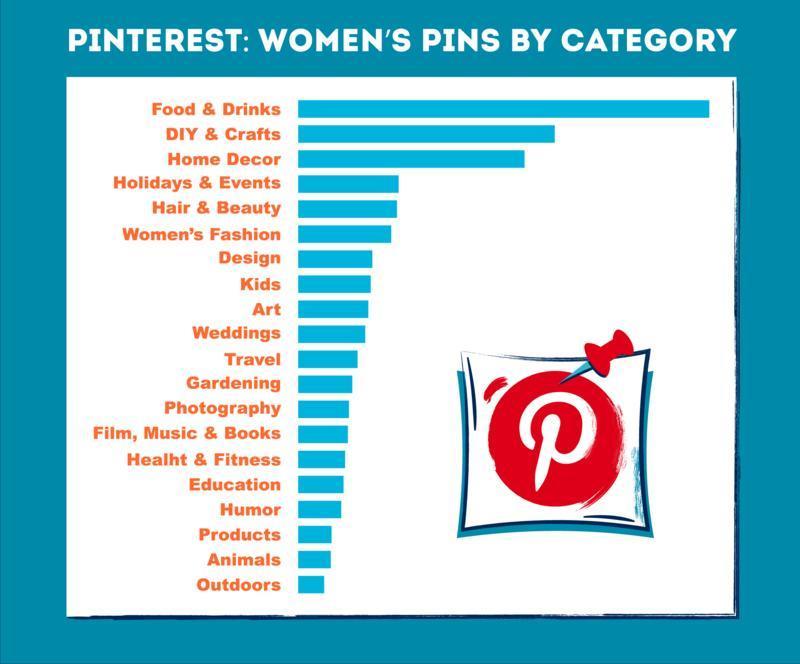 Now let’s discuss what makes Pinterest different from its competition.

As you know, Pinterest owes its popularity to young women, especially housewives who do handicrafts and don't mind popularizing their creations. And Pinterest-like apps and websites are perfect for these purposes as they offer:

Imagine seeing a picture, which interests and inspires you. With the help of Pinterest, you can save it in just a few clicks. Moreover, you'll have the option to add the image to one of your collections, which will look like a moodboard or cookbook page (depending on your needs and goals). Not bad, right? That's why we all love Pinterest so much.

As you already understood, Pinterest allows you to upload images and add them to your boards, as well as repin pictures from third-party sites or accounts of Pinterest users.

Yes, everything is extremely simple, but modern users are tired of the complexity and fond of  Pinterest’s simplicity.

To build an app like Pinterest, you have to think about additional paid features, which would allow you to monetize the service. As to the users, they'll get more opportunities for business promotion (if they're willing to pay, of course).

Take an example from Pinterest and the extra features it provides.

First of all, users with a business account can place a Pin It button on their site images, be it an eCommerce platform or an online magazine.

If a visitor to your site likes a certain image of yours, he may click the Pin It button and add the picture to one of his Pinterest albums. For businessmen, such an opportunity is extremely beneficial, because a link to his website will be attached to the added picture too.

To prove these business features of Pinterest really work, let's take a real-life example. The owners of the Allrecipes.com platform recoursed to a Pin It button, and soon users added 50+ K recipes from the resource to their boards. The Allrecipes.com traffic had also increased significantly.

Rich Pins links Pinterest to a third-party website (chosen by you as the business account owner) and gives you the opportunity to add more information to your pictures. 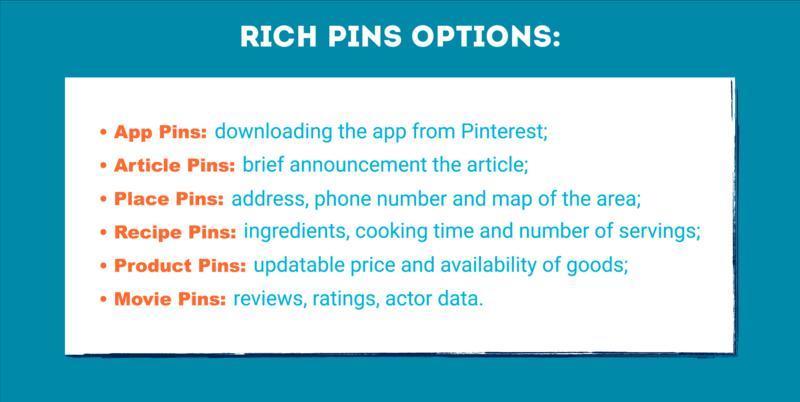 When Rich Pins is activated, the resource itself recognizes the type of your pin and suggests its correct use. 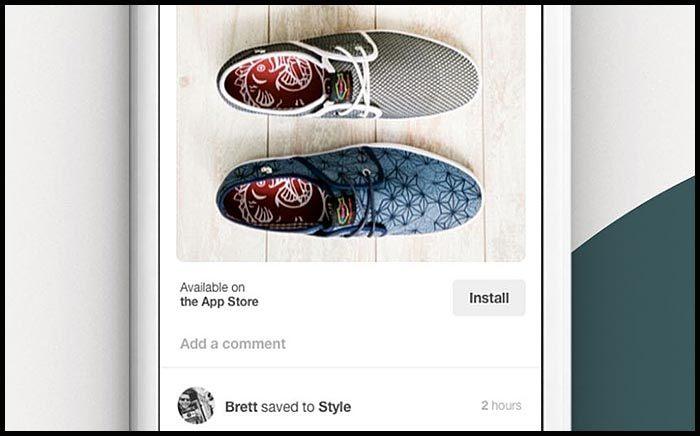 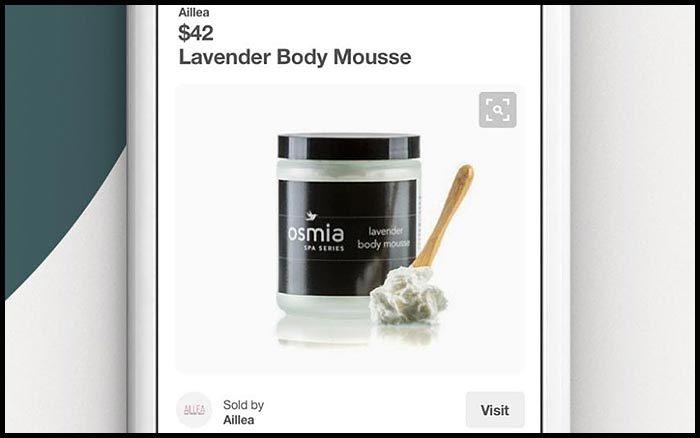 Product Pins simplify the shopping process and provide key information about the item. 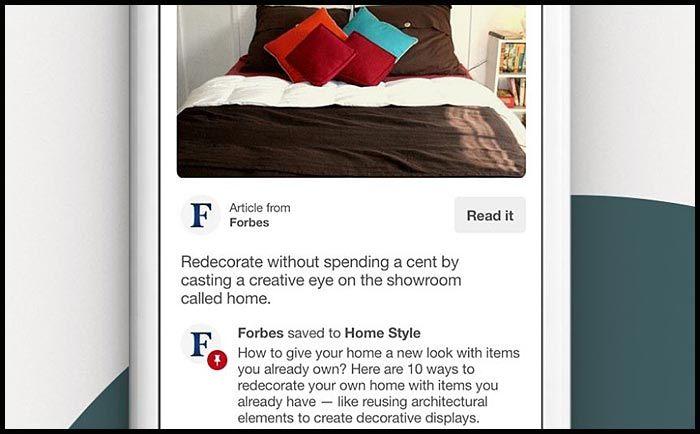 Articles Pins are a great way to save photos of publications with a short article announcement. 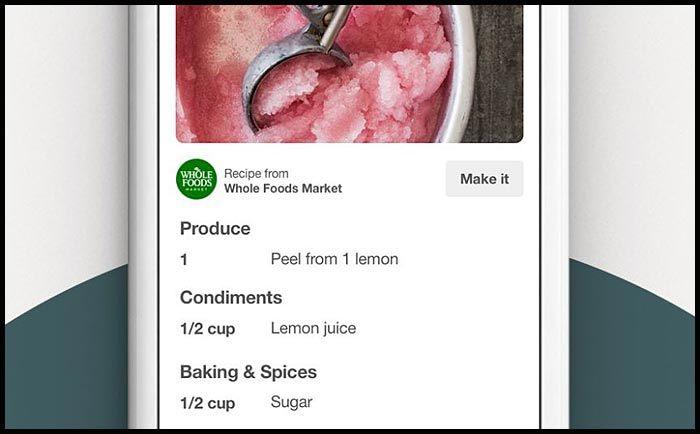 Recipe Pins delight any cooking fan as they allow creating a collection of your favorite recipes.

In truth, you can make an app like Pinterest successful even without such an option: after all, your key competitor has this feature mostly available to US residents.

Pinterest Selling Pins are enhanced with a virtual price tag and a Buy button. The user just clicks on it and proceeds to pay online.

To create a Pinterest clone application, you also need to offer business users access to analytics and statistics.

For instance, Pinterest Analytics provides a business owner with information about the actions of visitors to his web pages, such as:

It makes no sense to describe in detail everything required to build an app like Pinterest. In any case, you'll need expert advice on your project (which we're happy to provide).

So for now, we’ll just limit ourselves to a few key tips:

Now it's time to take up another crucial issue, which is Pinterest-like website and app budget planning. 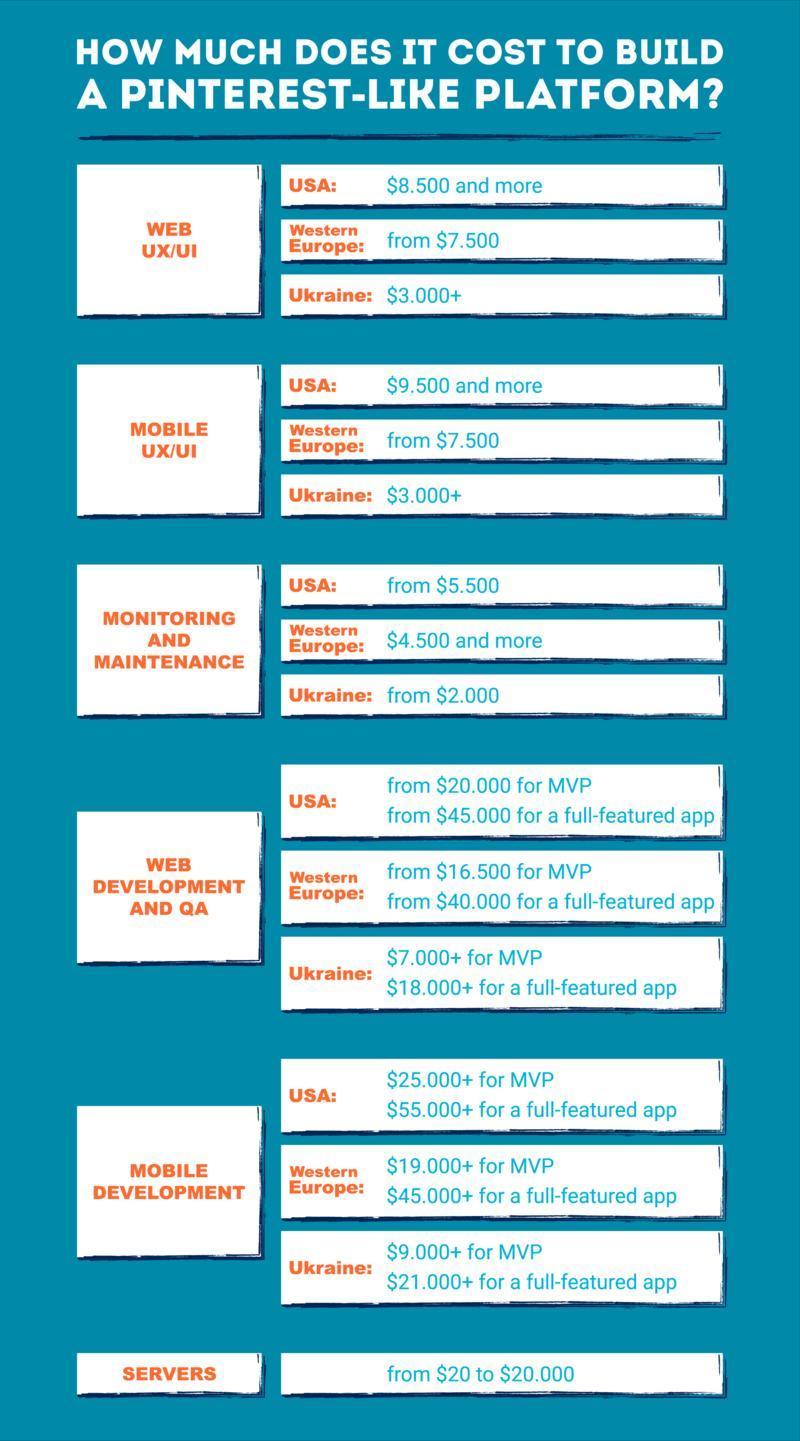 The above infographic gives you an overview of the estimated development costs. We'd like to supplement this information with a few tips on how to reduce your budget:

When launching an app like Pinterest, keep in mind that you'll have to deal with a great many competitors. And we're going to describe several of them. 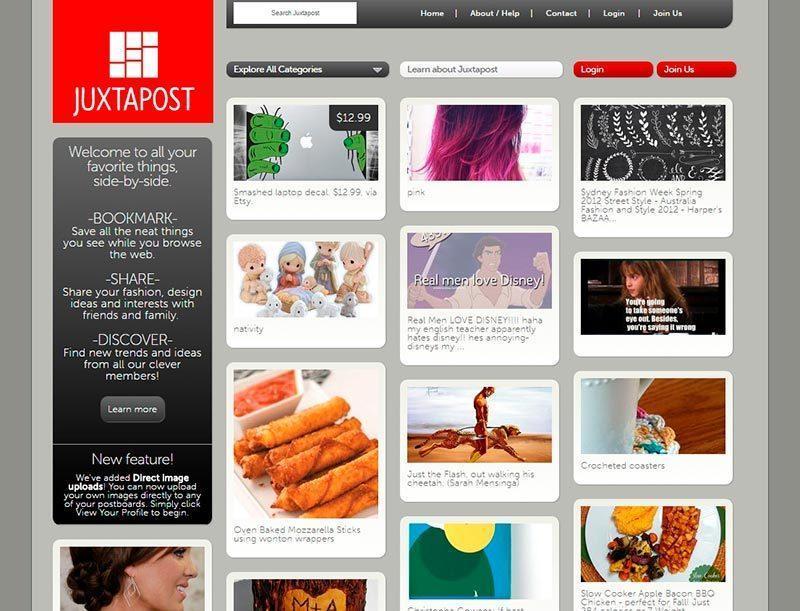 Juxtapost is one of Pinterest's biggest competitors. And they have a lot in common.

Basically, with Juxtapost, you can do everything that is possible on Pinterest. Another cool thing about the resource is that you're allowed to save your chosen content in the form of tables. What if it comes in handy one day? 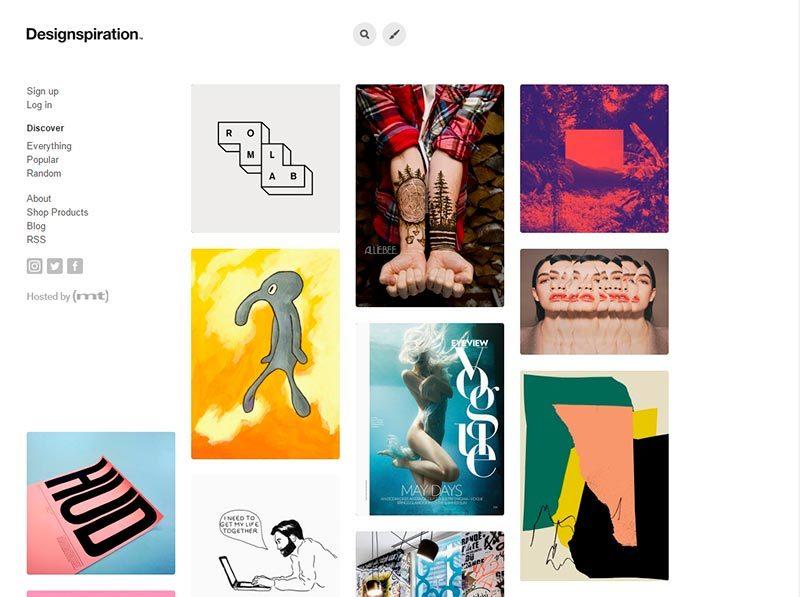 Designspiration is chosen by those who are passionate about design of any type. So people in creative professions use it to seek interesting ideas and discover new artists.

The site has a dynamic search, which always brings cool results. However, in general, the resource is similar in its nature to Pinterest. 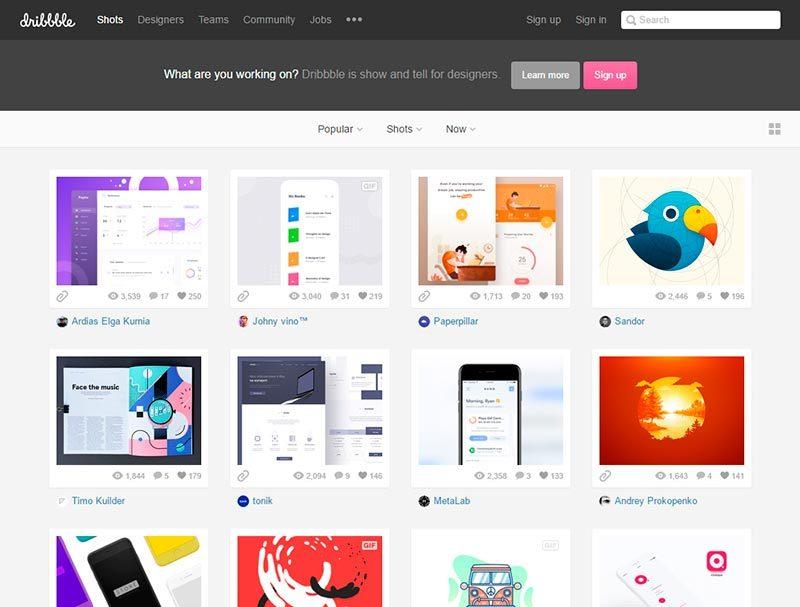 And of course, when developing an application like Pinterest, Dribbble shouldn't be overlooked. You've probably heard about this excellent resource, which provides people in creative professions, whether they're web designers or illustrators, with a convenient platform to showcase their pieces.

Dribbble is more specialized than Pinterest, but also quite popular with users. So if you think your creativity deserves respect and attention, show your items here and get feedback from knowledgeable people.

By the way, our company has its own Dribbble page too, and it presents a variety of our designs. Feel free to visit it.

We know how to develop an app and website like Pinterest and are happy to offer you our expert services. And we're always open to discussion.
Helen Vakhnenko
Share
Get in touch
Send us your comments, suggestions, questions, or feedback.
Next posts
How to Make a Powerful Car Rental App
Helen Vakhnenko
How to Build an On-demand Dog Walking App?
Helen Vakhnenko
How to Start My Own Online Shoe Store Business
Helen Vakhnenko
Services
Expertise
Technologies
Insights
Success Stories
Company
Careers
Blog
Contact