Why You Should Consider Creating a Niche Social Network

Facebook, Instagram, and other similar social networks are well known to everyone, and it's incredibly difficult to compete with them. And why should you compete with these market giants when you can succeed by using indirect means? Believe us, there is an easier, roundabout way to achieve your goal. All you have to do is to attract a certain group of people knit together by a common cause or hobby and interest them in your platform. Of course, we're talking about building a niche social networking application or website.

You have a much greater chance of winning a niche audience than trying to create a universal, all-around platform. In our article, we'll do our best to reason our case and convince you of the benefits of niche social media sites and apps.

So let's discuss how to make a social networking app for a very specific community and why you should do so, to begin with.

What is a niche social network?

The growing popularity of niche social networks is quite understandable. The fact is that today more and more people don't want to rely on just a few comprehensive resources like Facebook. We need special platforms to find like-minded fellows, potential friends, with whom we can discuss topics of interest.

Let's get the issue straight and hunt it down.

There are many variations of niche social media sites. We propose to single out several basic types and focus on them.

It’s best to start our analysis with professional networks. They're intended for business purposes alone: say, striking up new useful acquaintances, finding a job, hiring personnel, and the like.

Further in the article, we'll give you some examples of niche social groups of this type. 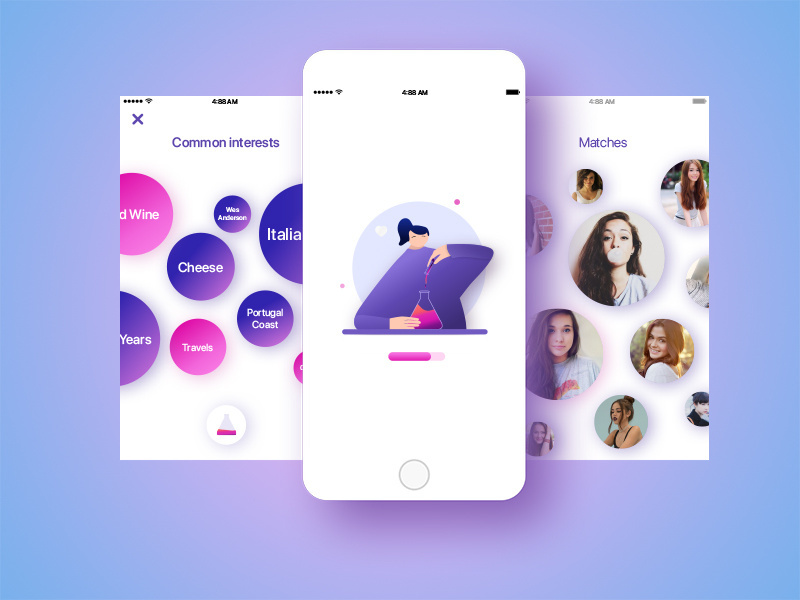 Take a look at the beautiful dating app interface created by our UI/UX experts! It looks quite impressive, right?

Also, we should mention dating resources helping users in finding their special someone (his or her so-called "soulmate"). You don't have to look far to see proper examples: there are the Tinder application, the Badoo website, and so on.

Let's suppose you have a dating app... but what must you do to ensure it successfully competes with other similar platforms?

Hobbies can vary a lot: reading books, handmade, web design, and much, much more. Users of these niche social apps and sites share their pieces, as well as view and comment on other people's works.

Such platforms are a good way to learn the opinions of experienced practitioners about your artwork and find new friends interested in the same things as you.

Corporate resources are designed to unite employees of one company and involve both professional and informal communication. Put it otherwise, these platforms not only serve business purposes but also help to stay in touch with each team member. The result is an increase in sales and an improvement in corporate culture.

And the last example of niche networks is university resources. Here we’re dealing with a convenient platform providing real-time online interaction between teachers and students who are welcome to use such a website to communicate with each other. They can share news, ask and answer questions, just chat, and more.

Need to develop an efficient instant messenger? We have a great deal of experience and are ready to make you a special offer.

When creating a niche social community, keep in mind your competitors. Staying alert is always helpful; besides, it'd be smart to analyze their examples and adopt the best ideas.

Let’s get a closer look at the issue.

DeviantArt is the largest social network aimed at artists and photographers. They use this creative platform to communicate with each other, share their pieces, get inspired by various cool works, etc.

The resource appeared 20 years ago, in the distant 2000, at a time when nobody knew about such a concept as "niche network". The company managed to achieve significant success, and therefore, in 2017, the Israeli company named Wix paid $ 36 million to buy it.

To date, DeviantArt has gathered more than 30 million photographers, artists, and animators who post at least 160,000 of their works daily.

Agree, the DeviantArt example makes you think that social networking app development for a niche community is a cool idea and it may be worth a try.

Pinterest is an incredibly popular social online service allowing creative people to post their images (so-called "pins") in thematic collections (they're also known as boards) and share these pieces with all users.

Pinterest was created by experts from California (Paul Sciarra, Ben Silbermann, and Evan Sharp) who wanted to provide the world with a special niche social network to share ideas and find inspiration. Pinterest began working as a beta in 2010 and has won numerous fans over the past 10 years. 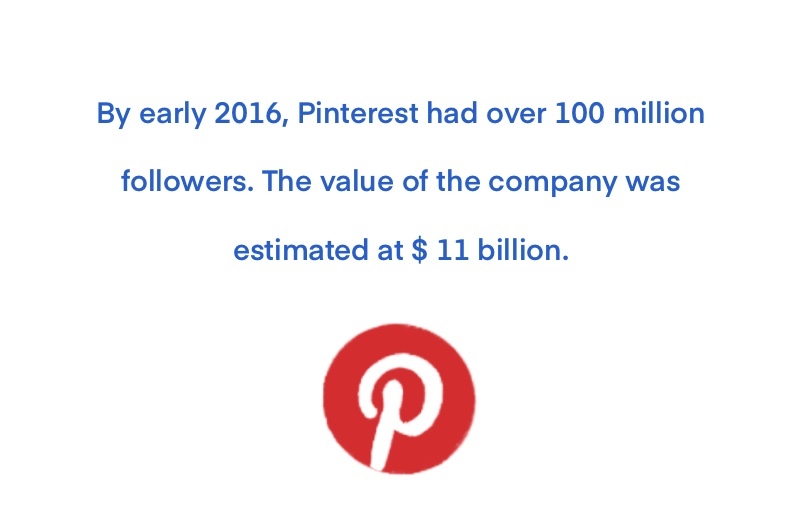 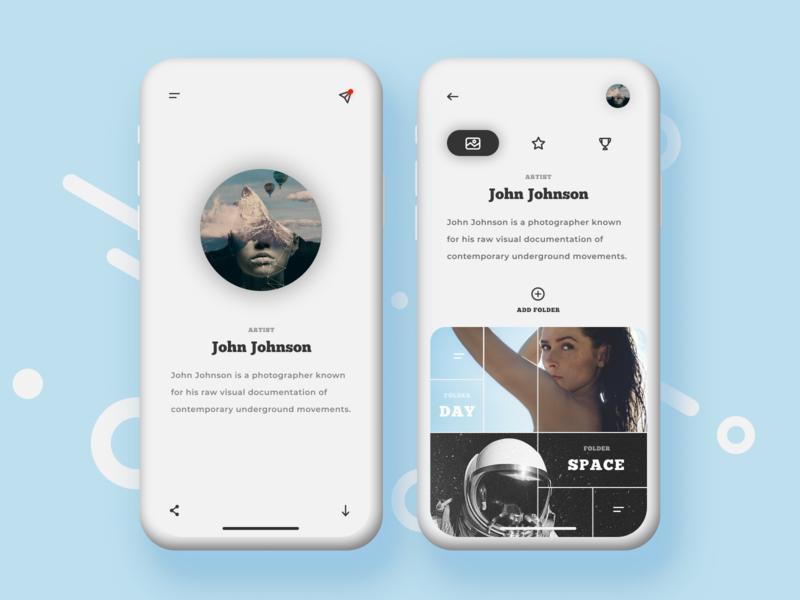 It would also be a good idea to build a social media app for a niche community targeted at the world of musicians. Here are some striking examples.

You've probably heard more than once about such a musical social network as SoundCloud, which is also called the “cloud service for sound files”. It was created by a company led by Eric Wahlforss. The goal was building a niche social media app that allows users to exchange musical compositions, playlists, etc.

SoundCloud is similar to YouTube with the distinction of being focused on music tracks. The online service enables musicians to upload their creations and receive feedback from other users.

SoundCloud offers both paid and free tariffs. The main difference between them is the duration of audio tracks that can be uploaded, and access to some additional features.

You should definitely pay attention to such an example of niche social media platforms as Bandcam. It targets three categories of users:

Our experts are able to create a unique app and site design. Follow the link to see what we offer.

Scientists of all stripes also need their niche community-chat apps, such as…

The platform was launched more than 10 years ago, in 2008. The idea of its creation belongs to Richard Price.

In fact, Academia is a social network targeted at scientists who can publish and discuss their research, as well as monitor competitive work in similar areas. The resource is a great opportunity to find your colleagues and enter into a productive dialogue with them.

Of course, creating a niche social community aimed at businessmen and professionals can also be a successful startup.

Probably everyone knows about LinkedIn, a highly reputed social network for business communication. It's focused only on professional activities, such as finding a job or hiring employees. Even LinkedIn statuses have nothing to do with the marital condition: on the contrary, they represent how actively the user is looking for a proper vacancy and in which one he is interested.

Another instance of professional niche social apps and websites is Viadeo, launched in 2004.

Viadeo brings together experts of any profile and level, with more than 65 million users. And by the by, recently, the company acquired Unyk.com from Canada and ApnaCircle from India (which are somehow similar to Viadeo) and therefore has joined the ranks of largest professional niche social media networks in the world.

Now let's discuss such a niche community as travelers and tourists.

Asmallworld, a social network of international tourism enthusiasts, was founded in 2004 by Eric Wachmeister. The number of users isn’t so big, only about 300 thousand, and the majority are representatives of the so-called “elite”: show business figures, corporate executives, oil barons, famous athletes, and more. Advertisers are no less impressive: Mercedes-Benz, Jaguar, Cartier, MoetChandon.

As with other similar niche social media sites, Asmallworld users share their experiences traveling around the world. In addition, they may resort to the help of Asmallworld to organize the most comfortable journey (the platform works with luxury hotels, renowned restaurants, and so on).

It's time to discuss building an app to share design news or create a professional portfolio. And the main name on the list is, naturally, Dribbble.

Dribbble appeared in 2009 thanks to the American studio named Simple Bits and led by Dan Cederholm. During this time, the network has become one of the best places where designers can share their concepts and get fair reviews.

Dribbble might be considered as a huge portfolio of diverse design projects, including copyrighted illustrations in graphics, animated pictures, packaging design examples, and the like.

Reasons to create a social network for community

So why create a social network for a niche community? What are your benefits?

First of all, building niche social media apps helps to assemble a team of like-minded people: people united by a profession or a common interest. Of course, the creation of such a community isn't directly related to high earnings but it's nice to be part of something bigger from time to time, isn't it?

Moreover, the users of your platform are your allies, whose support you should safely count on in the future. For example, you may attract them to volunteer or taking part in various social projects. After all, these initiatives are additional and quite effective PR.

Of course, a team of like-minded people and enthusiastic social-media groups is a wonderful undertaking but you should consider the issue of monetizing the platform too. A good way to get a source of income is to resort to specialized advertising (how about ads banners?) or personalized offers to your customers.

Since your resource brings together people related by a common interest, it won't be difficult to offer them products or services they won't mind buying. Say, athletes might order fitness food or purchase sports equipment, and users of dating sites would be attracted by the idea of ​​booking a table in a restaurant. Simply put, you’re providing your advertisers with a well-prepared target audience. And if so, you're welcome to sell them ad placements at a higher price.

So don't worry, you'll be able to recoup the cost to make a social network app and make good money.

The next advantage is connected with the previous item and logically follows from it. Simply put, by creating your own network dedicated to the specific topic, whether it's a hobby or a profession, you get a chance to approach reputed brands working in the same field and offer them exclusive contracts. These companies will help sponsor your project with the goal of gaining access to their niche audience, its 100% concentration.

The cost to develop a social networking app like Facebook can be high... is the game worth the candle? In our article, we've analyzed the issue from A to Z.

We think that we won’t surprise you by saying that your site’s engagement rate is crucial when it comes to communicating with advertisers. The higher this indicator, the more chances to convince potential partners to join the number of your sponsors.

And what is so good about niche social media platforms? It's quite simple: they have a fairly high rate of engagement. And it’s only natural since you gather people according to their interests.

Also, remember about network effects in a niche community. In other words, if a group of like-minded people is fond of your platform in its test mode, you're likely to popularize it faster and in an easier way. You won't have to resort to expensive means, for the Word of Mouth rule might work: users will promote your project themselves by recommending it to their friends.

As you can see now, the cost to build a social media app or website justifies itself.

But what should you do if you resolve to start such a project? We guess it’s time the summarize the key steps involved in building a social community from scratch.

So you have to…