Ultimate Guide on How To Create an NFT Marketplace

Do you know what masterpieces of art, great paintings of various sorts, are famous for? We answer: they’re so valuable because they're unique. Alas, the same cannot be said about digital creative items, no matter how special they are… in the end, they’re so easy to duplicate. At least that was the case before NFT tokens appeared.

NFTs are a whole other story. Each of them is inimitable and exists in a single copy. Being stored in the blockchain, it is immune to fakes. That's why NFT items are attracting more and more attention. Among those fascinated by them are ardent collectors seeking to own unique digital objects.

The popularity of NFT-based art is growing year by year, especially during the pandemic (whereas sales of physical art have plummeted). And the demand keeps growing: the total value of NFT transactions at the beginning of 22 amounted to more than $300 million, which exceeded the sales level for the entire past year.

All of the above leads to a logical conclusion: it's high time to develop an NFT marketplace and start making money on it. And in our article, we’re going to tell you how to do it.

What Are NFT Tokens?

Let's first see why you should build your own NFT marketplace (to serve as a place to sell and buy NFT items):

NFT is a trending topic of discussion, flashing in the headlines of various publications. And no wonder! Believe us, there is something to talk about. How do you like this kind of article: “The burned piece named ‘Morons (White)’ became an NFT token and was bought by the blockchain company Injective Protocol”?. The transaction price reached $95,000. Interesting, isn't it?

So, what is NFT, what is its catch?

To create an NFT-platform, we should understand what NFT means, to begin with. So let’s figure it out.

NFT stands for non-fungible token. These tokens exist in a special environment known as the blockchain.

You may be familiar with the concept, but let's briefly recall its essence anyway, just in case. The blockchain is a system integrating a great many computers. It consists of peer nodes (with no controlling one among them), which form a chain of blocks (hence the name: blockchain). Each device included in the system stores all the published information.

Now back to the definition of tokens. At its core, a token is a record in a ledger within a blockchain. And usually, tokens are fungible (exchangeable) like a currency: in other words, you can convert a dollar into a euro and vice versa.

However, this only applies to money and everything like that. Not every digital asset is equally fungible. Let’s say, a painting by Pablo Picasso isn't the same thing as a piece by Claude Monet. That's why NFT tokens were invented.

Each NFT item is inimitable and unique. And key information about it (authorship, buyer, transactions, etc.) is securely stored in the blockchain. NFT can be compared to a digital certificate confirming the product's uniqueness.

Above, you see an example of an NFT. It’s a pixelated image of a punk woman. The lot, called NFT Cryptopunk 4250, was put up for sale at a price of over $116K.

NFT tokens are based on the Ethereum blockchain and use the ERC-721 standard.

While blockchain has been on everyone's lips from way back, NFT is a relatively new concept. We started talking about it closer to the 20s of the 21st century.

The glory of NFT began with the game CryptoKitties (whose players had to feed charming digital kittens). The game managed to gain a lot of fans; moreover, some of these NFT-based virtual kittens had been sold at fabulous prices.

And in 2021, the popularity of NFTs skyrocketed even more. The reasons are various, including the evolution of the blockchain infrastructure itself. And, of course, the pandemic had its impact too: being in self-isolation, people were carried away by new tech ideas and digital opportunities. Finally, the interest of celebrities has turned NFT into a real trend (which served as the beginning of the NFT token development boom).

What are NFTs' properties? 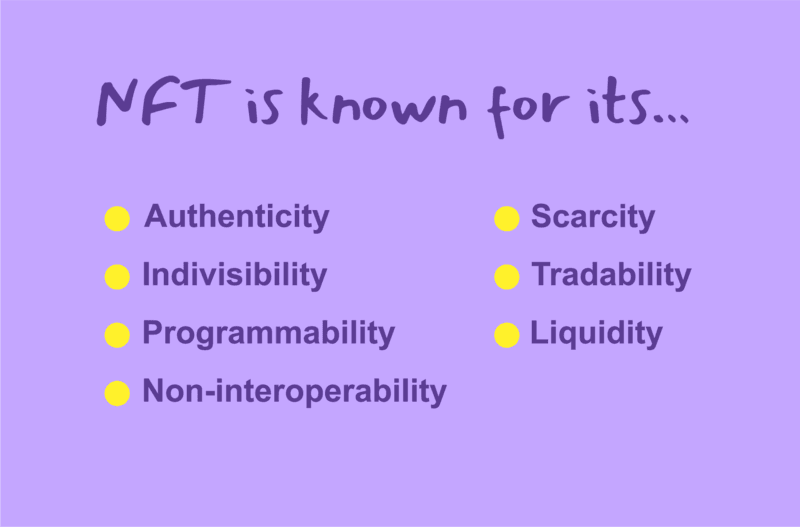 Now let's try to figure out what the diagram above means:

There are also SFTs or semi-fungible tokens. Being an intermediate option between fungible and non-fungible tokens, they're focused on creating limited collections containing a predetermined number of items. SFTs are, too, divided into public and private ones.

Any object claiming to be unique can be digitized, turned into an NFT, and put up for sale. Here are just a few of the most popular options (though it's all up to your imagination):

Infatuated with the new cool trend, people of creative professions dived right into tokenizing their pieces. And among them are famous personalities:

Speaking of who buys NFTs, we have to mention collectors of unique things, gamers interested in digital in-game items, art fans... and just people who are passionate about everything new (including non-fungible tokens).

What Are Non-Fungible Token Marketplaces?

To buy and sell NFT items, you have to deal with special resources. Traditional cryptocurrency exchanges won’t do in this case. In other words, we’ve finally come to the key topic of our article: how to create NFT marketplaces.

!!! 5 successful e-commerce projects: follow the link and get inspired! !!!

We’re talking about a trading platform with non-fungible tokens stored. And these tokens can be sold and bought. Moreover, NFT products either have a fixed price or are put up for auction.

How the NFT Marketplace Works

A non-fungible token platform operates on the basis of so-called smart contracts. Their peculiarity is that they’re self-fulfilling and don’t depend on the human factor. Therefore, the parties to the transaction don’t have to trust each other. 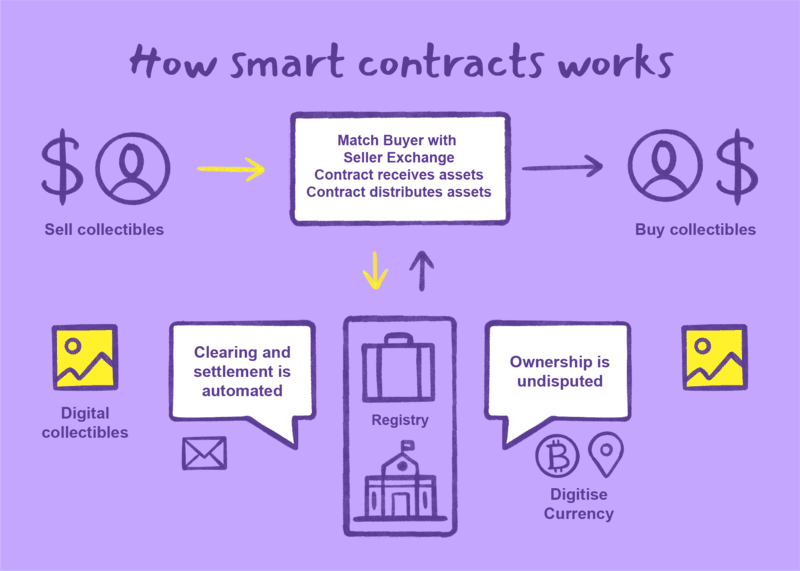 Smart contracts supplement a token with unique data about the product it’s connected to, after which the NFT item is open to sales or auction. And the purchase money is debited from the buyer's account only if the terms of the transaction are met. Otherwise, the deal is considered invalid, which leads to its automatic termination. Of course, such an approach reduces and even eliminates fraud attempts. That's why smart contracts are so popular right now.

As you can see, the whole thing is very clear and simple.

The User Flow of NFT Platforms

As the owner of the platform, you must decide how best to approach the registration process: 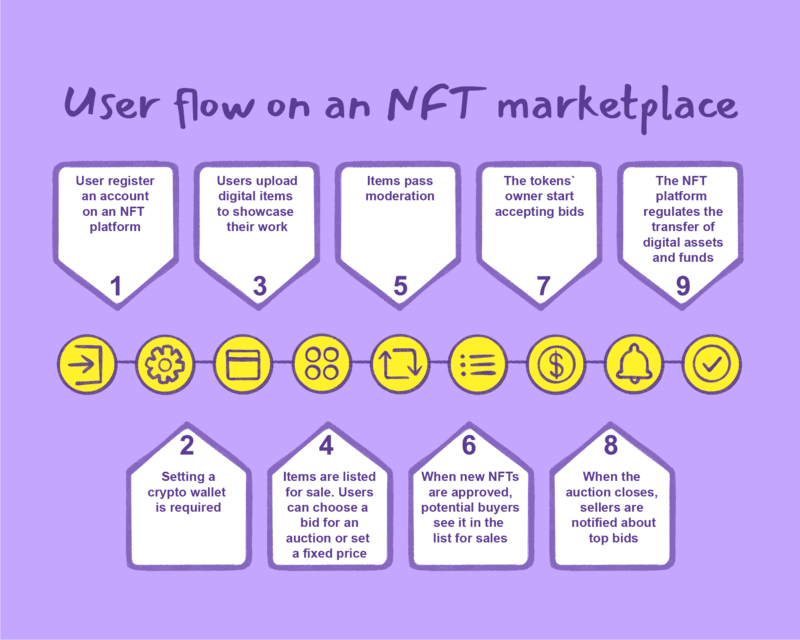 Take a look at the interface of OpenSea (one of the most popular NFT platforms). It’ll get you an idea of what you have to build (if you decide to create an NFT-platform too).

Must-Have Features of Your NFT Marketplace 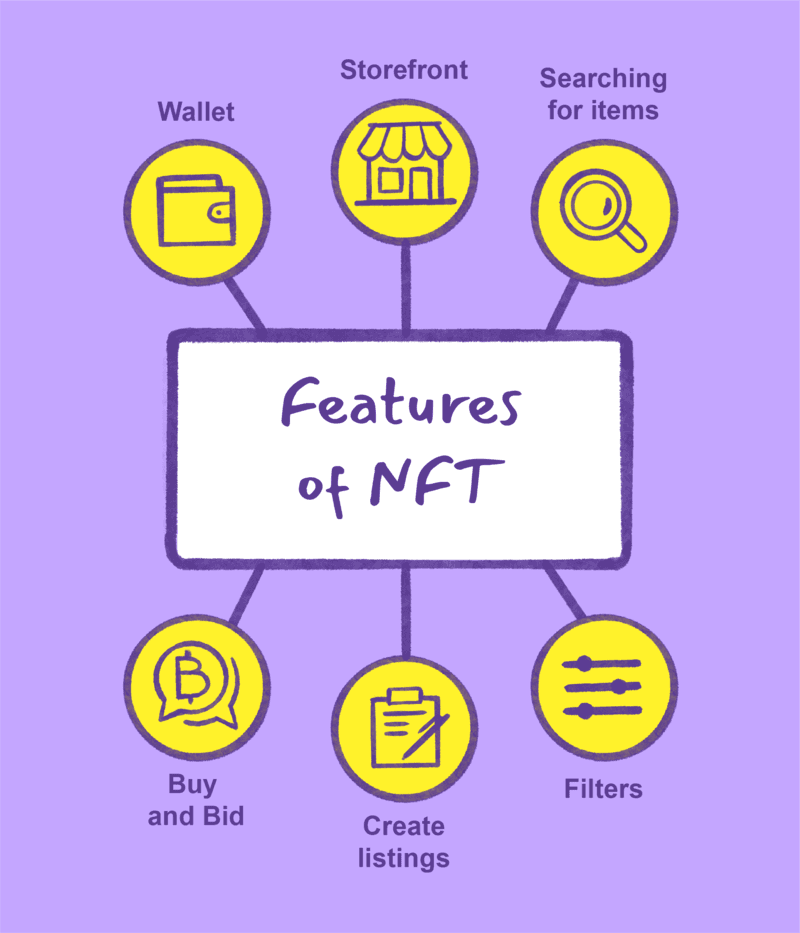 Let's consider the most essential features, without which your resource won’t work as it should:

These features are quite enough to build an NFT marketplace (in the end, it's better to start small than not to start at all). However, if you want more, consider additional options such as:

And now it's time to discuss the NFT-platform development process, step by step.

How to Create NFT Marketplaces?

Of course, the developers you hire know how to create NFT marketplaces (at least they should). But just in case, we’d like to show what technologies will help you implement the project. 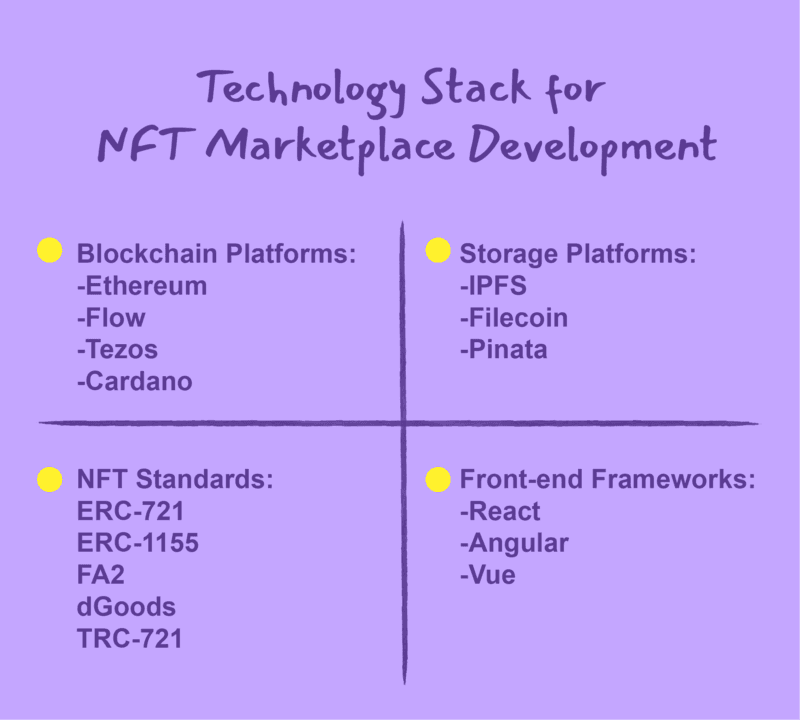 How to Make Your NFT Trading Platform Profitable?

We’re 100% sure you’re eager to learn how to monetize your project. In fact, there’re many ways to achieve your goal, but we’ll list only the most popular ones:

Thinking of creating an online marketplace? We have a few useful tips to help you with such a challenging task!

We've discussed everything to get you started with non-fungible token marketplaces. Now you know how to approach the NFT-platform development process without unnecessary risks. And if you're ready to move from words to deeds, write to us, and we'll discuss your project in more detail.