We are constantly making deals. It doesn’t matter what it is about: buying a product, exchanging goods, providing services... in any case, all these activities involve drawing up and signing a contract. Moreover, the traditional model of business relations includes a third party in the process: a banking institution, a law enforcement company, a government agency, the choices are many! Its task is to confirm and ensure the fulfillment of the terms of the contract.

But these kinds of intermediaries are an additional headache. They imply a waste of time and money without any clear guarantee of a successful closing of the deal. On the other hand, self-executing smart contracts are a whole different thing! They’re incorruptible, highly intelligent mathematical algorithms and cannot be deceived.

But what’s a smart contract? Why is it needed and what are its advantages? Is it possible to simplify and automate business processes with its help? And finally, how to develop smart contracts?

So many questions! To get answers to them, you have to take your time and read our blog piece. And then feel free to contact us.

As Dune Analytics revealed, the number of new smart contracts on the Ethereum network alone is constantly growing. There are various reasons to explain such an unstoppable rise in popularity, and one of them is that the development of digital technologies reduces the cost of placing smart contracts and makes the whole thing much easier. 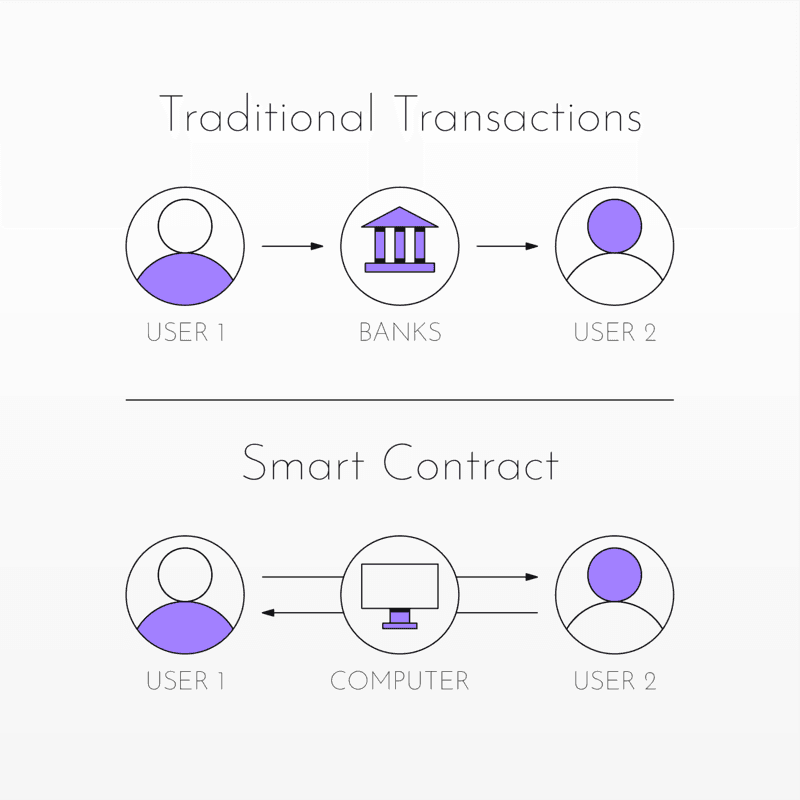 A smart contract is a digital analog of traditional agreements. It's a special algorithm performing certain actions when specified conditions are met (for example, sending money to the seller when the goods are delivered to the buyer). Smart contracts are a great way to eliminate the intermediary when making deals, whether it's selling goods or providing services.

An example of using smart contracts

Since smart contracts are based on the blockchain, they inherit their most important features, such as:

In summary, let's say that a smart contract cannot be faked, changed, or deleted, which makes it so reliable. We'll talk more about the benefits of smart contracts on blockchain networks a bit late, though, just keep reading.

The smart contract concept is quite old, the idea originated at the end of the 20th century (more precisely, in 1994). However, it was practically implemented closer to the 21st century (in 2008), with the advent of blockchain technology.

In those days, blockchain only worked with bitcoins, so smart contracts remained just an abstract theory. The explanation is simple: the creators of bitcoin wanted to ensure greater security of their network and introduced many restrictions on working with it. And these restrictions affected smart contract development either.

But five years later, Vitaly Buterin created the Ethereum cryptocurrency and expanded the possibilities for programming smart contracts in the environment of the new blockchain network. Moreover, Ethereum smart contracts are still very popular and in demand. Although today they're far from the only solution (we'll discuss others later in our article).

How a Smart Contract Works

The smart contract code contains an algorithm of actions that should be performed when certain agreed-upon events are triggered.

A smart contract records all the information to the blockchain, and the code is placed in a special block (the so-called software container). There is also the concept of messages, which are the inputs and outputs of a smart contract (the predefined conditions the smart contract is waiting for, and the actions it performs when they're met). It sounds complicated and confusing, but you definitely get the gist. And anyway, you don't need to understand the details to create a smart contract.

But there is something you do need to understand! Therefore, take a look at the approximate process of creating and executing a smart contract:

So when one implements smart contracts, he or she completely eliminates the intermediary from the transaction process. Thus, we get a system that requires neither registration & regulatory authorities nor certificates/paperwork. You don't need to go somewhere to make a deal and sign a contract. Doesn’t it sound cool?

We’re done with the benefits of smart contracts, but what about the areas of their use? Let's see what can be said in this regard.

The primary purpose of a smart contract is to securely store information and update it as needed. And it doesn't really matter what market we're dealing with (logistics, real estate, whatever!): data storage is a must-have anyway.

And only if the data is secure, we can move on to the issue of guaranteeing compliance with the terms of the transaction (in which the smart contract helps us too).

Logistics and the supply chain are inextricably linked. Unfortunately, these processes are still far from perfect. Managing them is troublesome and difficult. Happily, by developing smart contracts, you get rid of at least some of the problems and make the supply chain more reliable.

With blockchain technology, all records of the supply process, from warehouse operation to the delivery of goods, can be maintained digitally and controlled by smart contracts. Therefore, there is less risk of one of the parties violating the terms of the deal.

We talk a lot about how blockchain & smart contract development can improve logistics in another article (just follow the link).

Realtors and other players in the real estate market are constantly working with various kinds of contracts. So their digitalization is one of the most promising blockchain usage areas.

Smart contacts greatly simplify transactions related to the sale and lease of property. Firstly, there is no need for personal meetings to conclude any agreements. Secondly, less risk of fraud. Thirdly, all processes are automated and therefore accelerated.

Mortgage lending also cannot do without drawing up and signing contracts. And if they're smart, so much the better!

The thing is, digitalization makes the process of obtaining mortgages more transparent, understandable, and secure. Definitely, the smart contract concept works in this case.

When it comes to medicine, smart contracts are a wonderful way to manage patient records as they allow securely storing huge amounts of data. There are also more opportunities to control the treatment process, and do it digitally. Besides, if necessary, doctors and patients can conclude self-executing contracts to document some moments of treatment (which could come in handy either).

Any business dealing with online transactions will become more efficient after their digitalization. No intermediaries and commissions, lower risk of fraud, faster processes… we’ve already described key the smart contract benefits, so you know what the point is.

A smart contract is what you need to monitor the conduct of the elections, voting, or auction and avoid their falsification. Digital algorithms are very reliable: they cannot be bribed, they count votes honestly and produce truthful results. In addition, the system automatically fulfills the terms of the deal, whatever they may be.

Not all blockchain networks are suitable for creating self-executing contacts. We’d like to describe a few of the most popular options:

Need some inspiration? Follow the link and take a look at the top blockchain startups!

If you’re determined to make smart contracts part of your business processes, you should know what you have to face and what challenges you need to overcome.

As you can see, the process of creating a smart contract isn’t as simple as it might seem. However, the game is worth the candle, as companies that have successfully applied these technologies prove.

Let’s take a closer look at some of the most impressive cases.

We’ve described the process of creating a smart contract and revealed its pros and cons. So now you know what is good about self-executing contracts and what risks you’ll have to face in order to use them in practice.

Be that as it may, our article should have convinced you to include digital technologies in your business processes. And the sooner this happens, the better. That’s the only way to prosper in a highly competitive market.