What is a minimum lovable product? | The difference between MVP and MLP
Home
blog
Minimum Lovable Product: What a MLP is and How to Create One
Share

Minimum Lovable Product: What a MLP is and How to Create One

What is a minimum lovable product (MLP) and how can it benefit your business? You've come to the right place for the answers to these questions, as we're ready to provide them in our piece.

Let's start with the fact that technologies are rapidly evolving, and new software items appear every day. As a result, users are harder to please than before.

Under such conditions, MLP can be the key to success. When building lovable products, we kind of test the waters. The task is to better understand what to offer our target audience and how to delight our users.

Of course, these are just generalities. They aren’t enough to build MLP. That's why we've prepared a complete guide; hopefully, it'll help you figure this issue out properly.

What Is A Minimum Lovable Product?

Just like MVP, a minimum loveable product provides users with a basic set of features: those without which the app or website won’t work properly. And the main difference is that MLP pays great attention to the UI/UX factor. The goal is to spend a minimum of resources to create a product, capable of attracting the users even in its simplified version.

The author of the concept is Brian Haaff. He proposed a minimum loveable product definition in 2013 when he realized the MVP approach no longer worked as it should.

Why Make A Product Lovable?

Every year the markets become more competitive, which makes consumers especially capricious and demanding. They won’t be satisfied with just a useful product, they need the emotions and impressions it provides them with.

Here is a basic example, just to make things clear. Visitors to the only coffee shop in the city would be happy with any interior and menu (they have nothing to choose from!). However, the situation will change radically as soon as several more similar establishments appear. That's when you have to think about beautiful serving, tasty dishes, and other ways to attract customers.

In other words, today it's important to create an emotional connection with consumers and give them the best experience of interacting with your product. And you can't achieve this goal with the help of useful features alone.

If you still don’t see the relationship between the minimum loveable product definition and all of the above, pay attention to the picture below. It'll put things into perspective. On the left, we see regular coffee without milk, cream, and other additives. It's a good option to brighten yourself up early in the morning, but nothing more. Another thing is a cappuccino with thick milk foam. Such a drink is tastier and looks prettier, it gives more emotions and impressions.

As you may have guessed, the coffee on the left is the MVP. The cappuccino on the right is the MLP.

To better understand what MVP is, read our other article.

And now let's take a closer look at the main differences between these concepts.

The Difference Between MVP and MLP

MVP is a simplified software version helping businesses bring the product to market at a low cost and in a short time. After the MVP launch, the company collects and analyzes the feedback and considers further steps.

For a long time, MVP was more than enough to get things done… however, the high level of competition presented new demands, which resulted in the emergence of MLP.

A minimum lovable product delights consumers beyond solving their problems. That's its main essence... but the differences don't end there. Let's look at some of them:

The difference between MVP and MLP is clear, but let's not forget one more concept, namely, MMP.

MMP stands for Minimum Marketable Product. The name eloquently reflects the concept idea and shows that we're dealing with the minimum set of features for which people don't mind paying. Of course, it's still a simplified software version, but it's monetizable. Simply put, this is a polished MVP or MLP.

There is even a special formula to illustrate the MMP meaning:

By testing and improving MVP or MLP, we gradually make it a commercially interesting product. 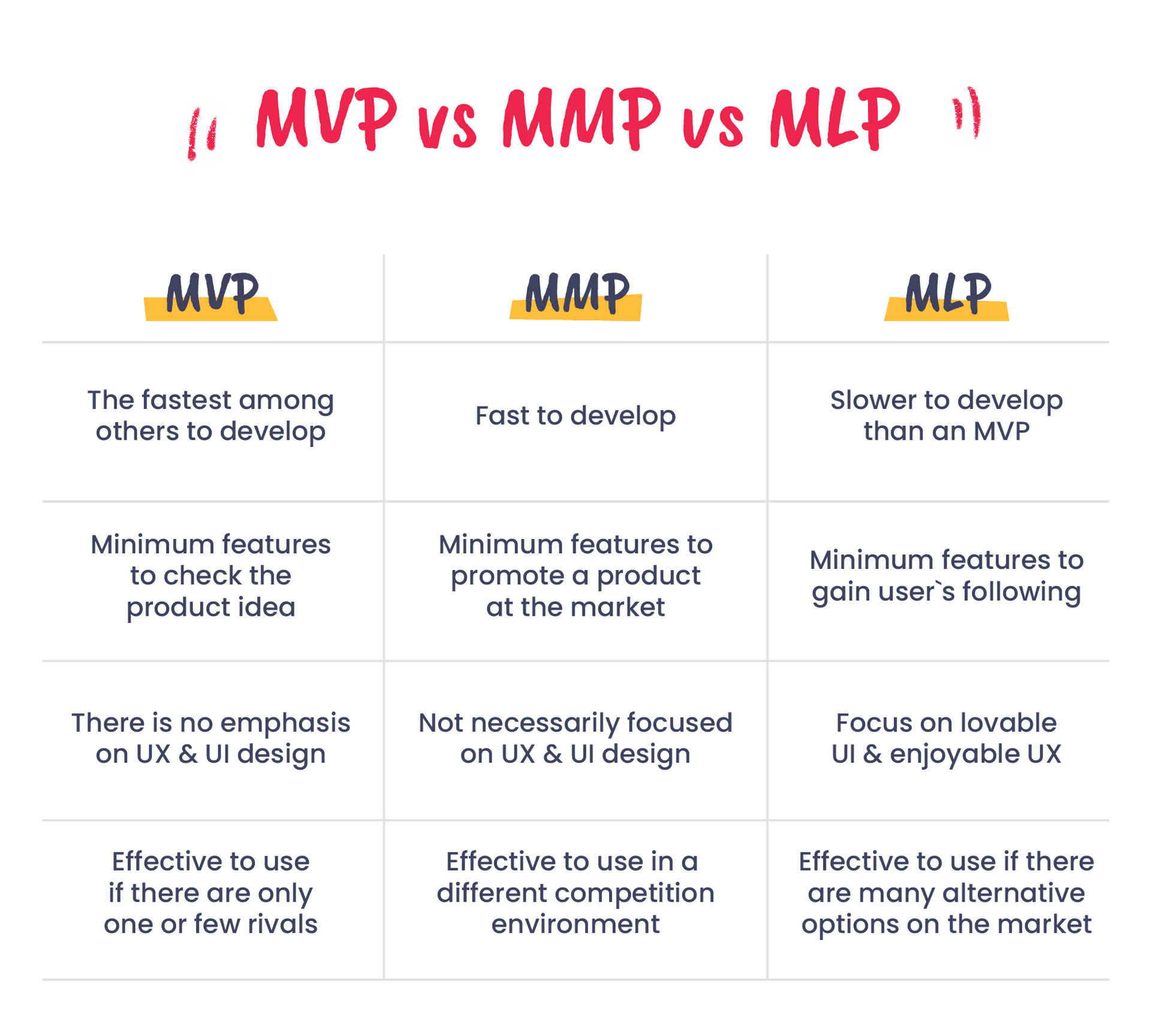 The Benefits Of Creating Your MLP Product

What if you’ve already created MVP? Your next steps are described in the piece at the link.

How To Build A Minimum Loveable Product

Since MLP is a simplified version of the software, there is no point in trying to bring a flawless product to market. It might take too much time, money, and effort, which will devalue the MLP concept. In addition, you're unlikely to 100% guess the tastes of your audience on the first try, even with preliminary research. So you had better take it slow and act wisely.

We’ll start with a more complicated option when you don’t have anything ready. Surely, your product must be visually appealing, but it's not enough! The MLP must still solve the user's problem. Define this problem and make it the goal of your project. Among other things, knowing your tasks will help you later come up with the functionality ideas.

To understand how to build a minimum loveable product, you need to explore the current market situation. What kind of competitors will you have? What are their strengths and weaknesses? What do your potential users choose and why?

Until you answer these and other similar questions, it is pointless to continue.

As we said, in addition to trying to impress customers, you must solve their problem. And the only way to solve it is to provide them with some basic functionality. Therefore, choose the minimum set of features, which will allow users to get what they want, whether it's an online order on a website or booking a hotel room through an app (or whatever!).

Pay special attention to the next step when creating your MLP product. It’s really crucial, as now is the time when you make your software not only useful but also loveable.

Work properly on the interface design. Remember, the process of using your product should be pleasant, easy, and exciting: in short, your app or website must be user-friendly. Only in this case, the first interaction of customers with the software will give them the most positive experience.

And one more piece of advice: don't try to design based on UI/UX trends alone. Consider the data you’ve collected during your market analysis.

Also, it doesn't hurt to create a community loyal to your product. Find those users among the target audience who believe in your project and are ready to help you finish it. Communicate with them on an ongoing basis and get their opinion on your MLP.

If you think your work will soon come to an end, then you're going to be disappointed. Alas, it's just begun.

After launching MLP, you need to test it on end-users and collect their feedback. The task is to draw conclusions and decide on the next development steps.

You’ll act in this way cyclically, in iterations, until MLP becomes MMP: a minimized product, which brings you profit.

Turning an MVP Into a Minimum Lovable Product

Another minimum lovable product example is the case when MLP is based on an already existing MVP.

Suppose, you've already built a minimum viable product... why abandon it entirely? A much smarter step is to remake your MVP into what you actually need. And if you're not sure where to start, take a look at our tips, they might help you.

First, you need to clarify the purpose of your project. Discuss the situation with the team and let them know that you have another task now, an updated one. All of you should work together, knowing what goal your company is aiming at and what you should get in the end.

You already have the basic functionality, which is a good start. All you have to do now is to add some appealing elements to your product and thus make it loveable.

If you haven't conducted your customer preference research yet, it’s the best time to finally do so. You can use the received data to develop a further strategy. Your task is to work on software design, provide an innovative user experience, and think about integration with other tools.

As you understand, there is a difference between MVP and MLP, but these concepts have something in common too. Namely, we’re talking about the opportunity to launch the product without any extra effort. Therefore, one must keep in mind the balance between under-investing and over-investing in MLP.

If you under-invest in a project, you'll achieve nothing. If you overdo it out of a desire to implement too many features or UI elements, you'll waste extra resources.

Creating an MVP only makes sense if you don't have any idea about your target audience yet, which is typical in the early project stages. Once you have the right information, turn your MVP into an MLP.

And remember! MLP development is an iterative process. It'll continue until you see you've achieved what you want, which means customers enjoy using your product.

Our experts know how to build a minimum loveable product and have relevant development experience. And we would be happy to help you with your software project.

Helen Vakhnenko
Share
Get in touch
Send us your comments, suggestions, questions, or feedback.
Next posts
Minimize Risks and Test Your Minimum Viable Product
Helen Vakhnenko
How Your Startup Can Reduce Development Costs with an MVP
Igor Bondarenko
What are the Next Steps After Creating an MVP?
Igor Bondarenko
Services
Expertise
Technologies
Insights
Success Stories
Company
Careers
Blog
Contact