Although each person is unique, most of us have some kind of twins or counterparts: people who resemble us and have similar facial features. Moreover, we can find our doubles even among world-famous persons (actors, musicians, and others). You just need to resort to the help of modern digital technologies, namely, celebrity look-alike apps.

Users are really enjoying such services: they have much fun finding their famed counterparts and posting the search results on social media pages. And these users can be easily monetized so that they could bring profit to the app owners. Isn't it a reason to develop the celebrity look-alike application of your own?

But before you proceed with your project, take your time to analyze the modern market and see what it offers. In other words, who are you going to compete with?

If the topic is of some interest to you, read our article. We’re sharing our expertise and describing 7 top applications with face recognition features. Also, you’ll learn the easiest way to make these services a good investment.

Should you bother developing a celebrity lookalike app? Are you in a position to attract enough users to make the whole venture profitable?

Yes, you have a chance to win your audience, because…

The summary is clear: if you manage to create an application with Faceapp recognition technology, you'll be golden. Your program will analyze the user's photo and look for his or her famous twins using the celebrity face(s).

Though, we should discuss the operation principle in more detail.

How Do Celebrity Look-Alike Apps work?

Let’s start with the basics: what do you need to do to find pictures of celebrities to tell which celebrity you look like?

What is the principle behind celebrity look-alike apps?

These applications are usually based on artificial intelligence and resort to machine learning technology to compare users' faces with those of famous people.

The very process of finding your double includes the following steps:

Typically, the functionality of such applications provides several key features:

One of the top celebrity look-alike apps is Gradient. Lately, the application has been actively capturing the headlines, so to say, and acquiring vogue. Its task, as you've probably already guessed, is to show which famous person you are most similar to.

A brief history of Gradient

Gradient was created by a Ukrainian startup of the same name several years ago. At first, the application was simpler in terms of functionality, but the developers didn't stop there and continued to improve their service. After one of the updates, the program had received a new cool AI-based feature needed to analyze a user's photo and look for his or her counterparts among celebrities. And the app’s popularity had skyrocketed at once.

By the by, showbiz stars themselves helped to increase the demand for the service. They enjoyed using Gradient and publishing search results on social media pages. Thanks to this, the application took first place in the App Store and Google Play ratings.

How the Gradient app works

To develop the celebrity look-alike application, you need to understand how it works. We’ve already discussed this topic earlier, but it’ll be useful to know which method competitors are using. So let's consider Gradient's operation principle.

According to Gradient's creators, it resorts to artificial intelligence technology to find similarities with maximum accuracy.

In fact, everything is extremely simple: the neural network analyzes the user's photo and refers to the application's database to determine a celebrity with more or less similar facial features. Then the program literally transforms the user into the found person.

Usually, the results are quite impressive, but sometimes Gradient seems to be joking. However, judge for yourself. 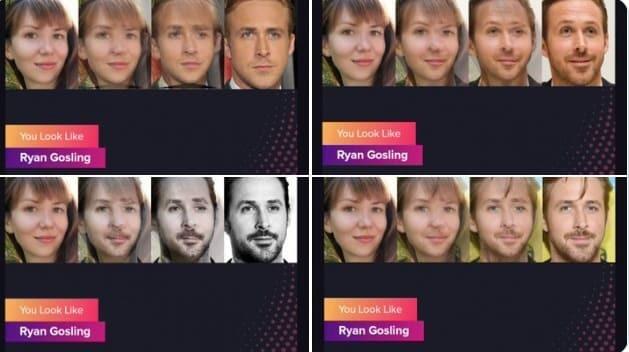 Anyway, users love Gradient, which they consider to be one of the best celebrity look-alike apps. They have a lot of fun turning themselves into celebrities and posting results on Facebook and Instagram pages.

The app is free in its basic version, but some of its features are only available with a subscription. 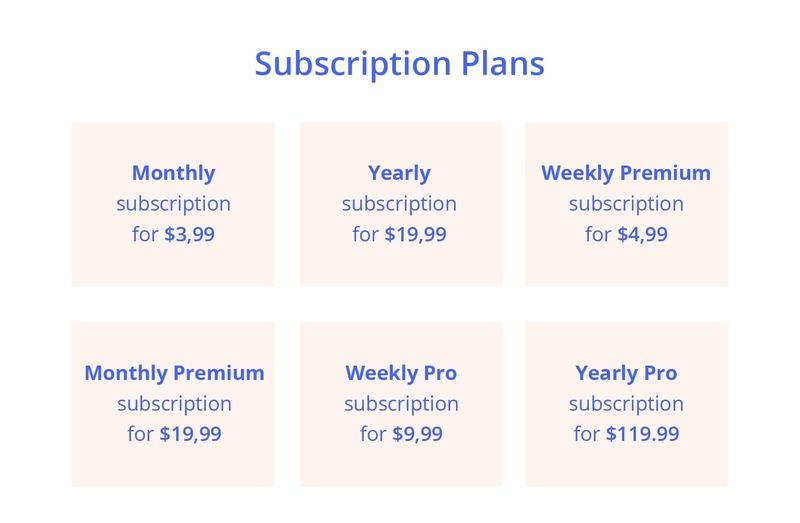 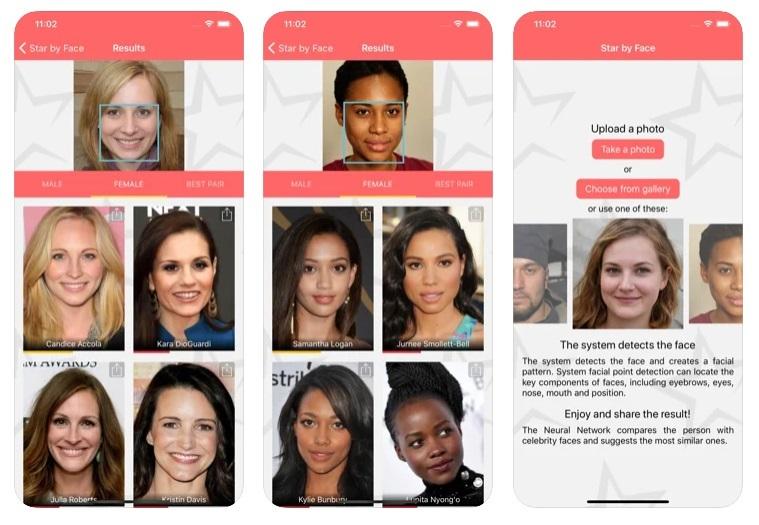 If you really intend to build an application like a celebrity look-alike, you should also pay attention to another of your possible competitors, which is StarByFace. The app has a rather eloquent name, so users can understand its essence without further ado.

The Celeb Twin application is mainly aimed at iOS users. It has several helpful features that allocate the service among other celebrity look-alike apps: 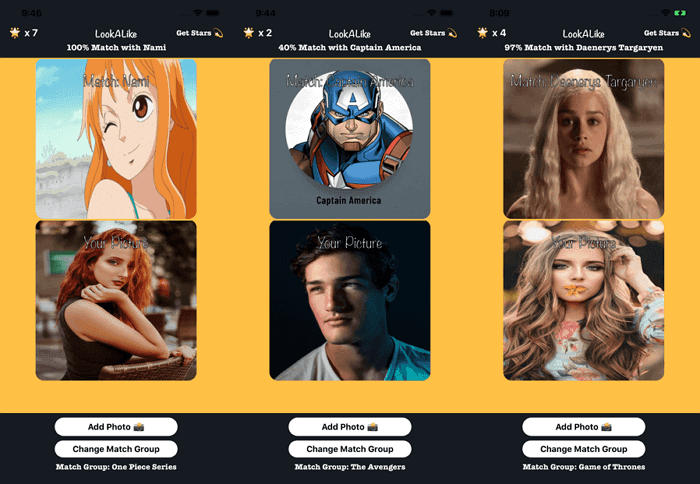 LookALike belongs to a very special type of celebrity look-alike apps. What is its peculiarity? We can explain right now.

To begin with, let's tell you one interesting story. Recently, a popular female blogger shared a video on her YouTube page in which she made up like Ariana Grande and walked in her new look through the streets of Los Angeles. Of course, she caught the attention of the public and won a lot of new subscribers. And if you want to follow her lead and get a similar experience, you have to use the LookALike app.

LookALike will let you…

So if you're going to a costume party, LookALike would make a great choice. All you have to do is add your photo and wait for the search results.

By the way, why not develop a celebrity look-alike app of the same type too? It may prove successful! 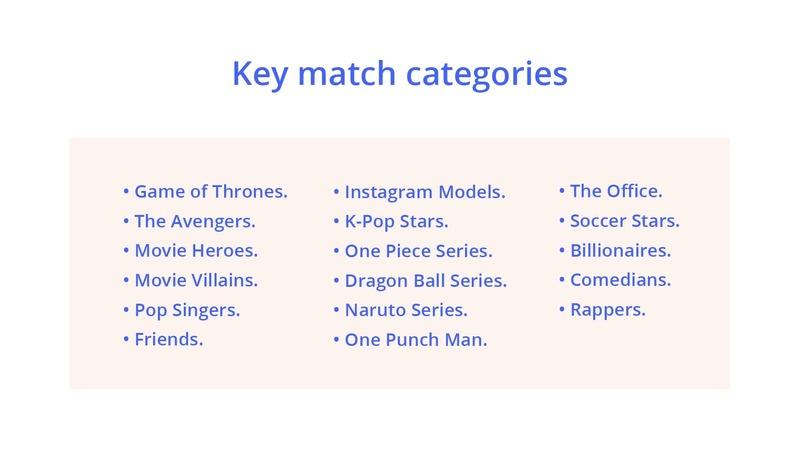 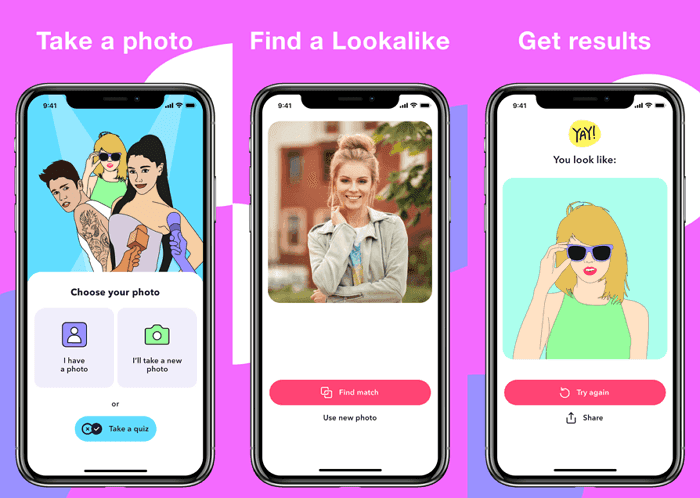 Looky is incredibly easy to use and that's what's so great about it!

Just follow the simple scheme of step, and you’re set: 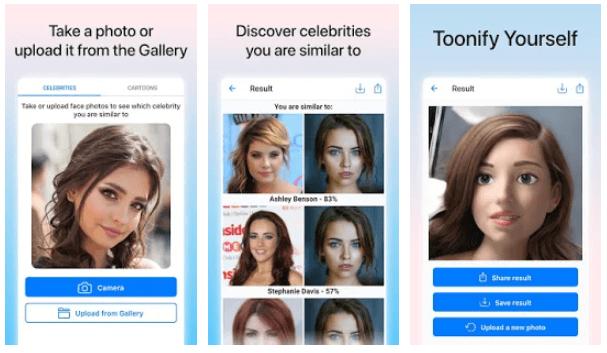 When thinking about developing a celebrity lookalike app, be sure to take a closer look at the Facer service, as it is also in high demand among users. And its popularity is well deserved, because:

Application developers advise uploading a close-up photo of your face to increase the chances of getting a quality result. 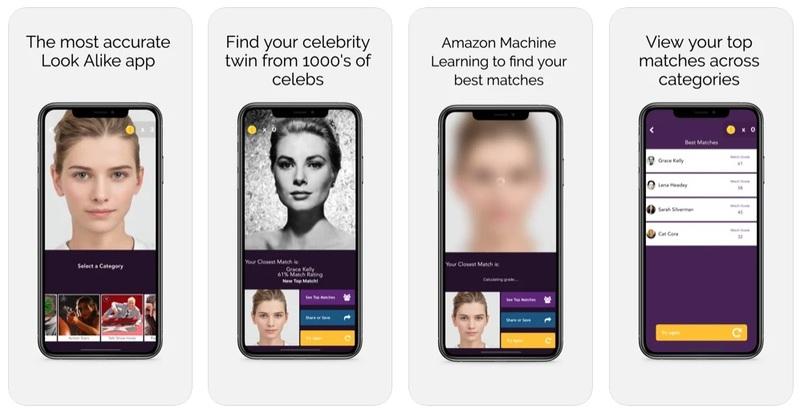 Who Do I Look Like is also among the best celebrity look-alike apps. So we're going to complete our comparative analysis by describing this particular service.

Have you ever dreamed of knowing if you really look like, say, Justin Timberlake, as your friends assure you? The Who Do I Look Like app will help you find out if their opinion is true. It'll analyze your photo, examine such facial features as the color of the eyes and hair, the shape of the ears, and so on, and give you its verdict.

The main features of Who Do I Look Like are as follows: 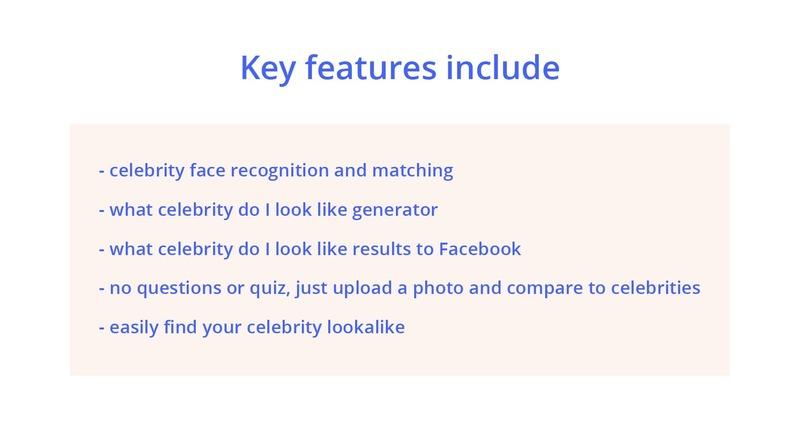 Let’s fantasize a little about other ways to entertain a user and help him find his doubles of some sort. Why not, in the end?

One more popular type of celebrity look-alike apps is a service allowing the user to check if he has a double among the characters of world-famous paintings (or sculptures). The program compares the uploaded photo with a huge database that stores information about thousands of paintings and selects the most suitable option.

Among such programs is the Google Arts & Culture application released back in 2016. Initially, it provided an opportunity to follow the world of culture, but this wasn't enough to interest the proper number of users. And therefore, at the beginning of 2018, the developers added a new interesting feature to the service. So now users can find their counterparts in the masterpieces of artists of the past centuries.

For the record, this feature made Google Arts & Culture the number one downloadable app in the US App Store (a true success, which had been achieved in a fairly short period of time). It proves that developing a celebrity lookalike application is something to think about (after all, the heroes of great paintings are also celebrities of their kind, aren't they?). 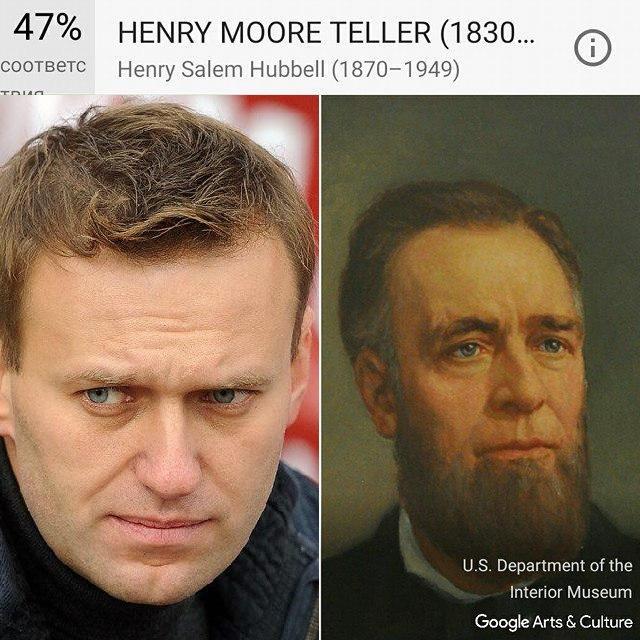 Cartoons are really hot right now. So why not create an application able to tell the user what cartoon character he looks like? The results might be quite funny! Of course, the person who takes advantage of such a mobile service must have a sense of humor.

A program of this sort would especially appeal to the youngest users. And since kids are the most active mobile audience, conquering it would be a smart thing to do.

Do you want to know how to build a face recognition app? Then don't waste your time wondering, just follow the link and read our article!

Let's say you were able to build an application like a celebrity look-alike. But a project of such a high level doesn't come cheap, you know, and you'll have to fork out pretty much. So, you should think about monetizing your mobile service beforehand.

We offer you several main ways to make your face-editing app profitable: 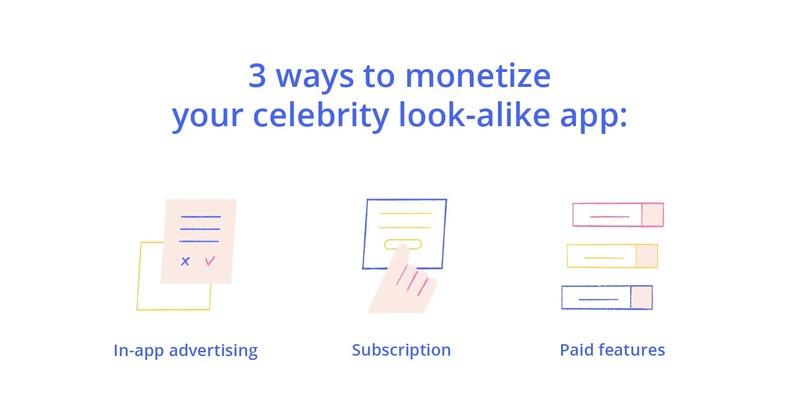 Our analysis is complete, and it's time to proceed to the next step, which is mobile development. Do you agree with us? Then let's collaborate!
Helen Vakhnenko
Share
Get in touch
Send us your comments, suggestions, questions, or feedback.
Next posts
How to Make an Image And Face Recognition App
Helen Vakhnenko
How to Build Great App Store Screenshots
Helen Vakhnenko
How to Create a Photo Sharing App like Instagram
Helen Vakhnenko
Services
Expertise
Technologies
Insights
Success Stories
Company
Careers
Blog
Contact