Why Does It Matter to Build Scalable Apps?

If you're thinking of launching a digital startup, be sure to consider scaling your mobile app or website. This will help you avoid various problems in the future. Moreover, the issue is best addressed at the initial stages of planning, since making changes to an existing project would require much more effort.

But what is meant by scalability? How to implement it, what methods exist?

Our article will answer these and many other questions. We'll share with you our experience regarding mobile development and tell you a lot of useful things. After reading the blog post, you'll learn how to create an app that scales, and thereby increase the effectiveness of your business idea.

What is scalability in software?

So what is app scalability and why is it needed? Let's figure the issue out step by step.

Primarily, a truly scalable app should be capable of the following:

What is the meaning of scalability?

In essence, we’re talking about the ability to bring up system performance in the smartest way: for example, by upbuilding computing resources (hardware or software ones). Surely, rewriting the whole code isn't the wisest idea, on the contrary, it’s a crazy one, possible only under conditions when other options aren't available. And in most cases, the best solution is to increase the number of servers or expand the capabilities of the existing system.

However, we’ll talk more about the ways of scaling your mobile app in due course, but for now, we’ll touch upon another question, namely...

Why scalability matters for your app

What is scalability in business? What does it give to your project and, as a result, to you, a startup originator? Does it really make sense thinking about all this before the time comes?

Yes, it does. And we’re ready to explain to you why the problem is worth your immediate attention.

Benefits of a scalable app

As it happens, there are many reasons to make the app scalable; we'll list only the most key of them. 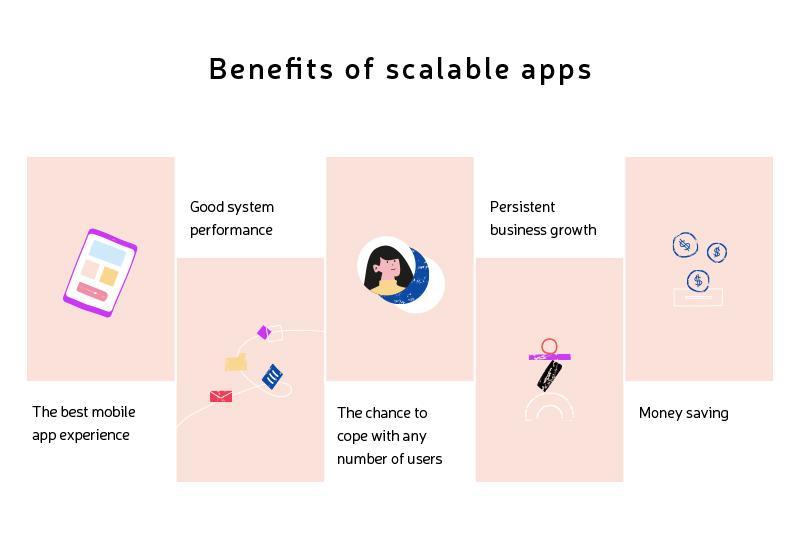 Speaking of affordable projects... how much does it cost to develop an application? Click here to find out the answer.

It's time to discuss how to scale mobile app solutions: what are the main options?

As we mentioned earlier, scaling purposes can be achieved in two main ways: by increasing the capacity of an existing system or enlarging the number of servers. Let's take a closer look at the difference between these approaches. 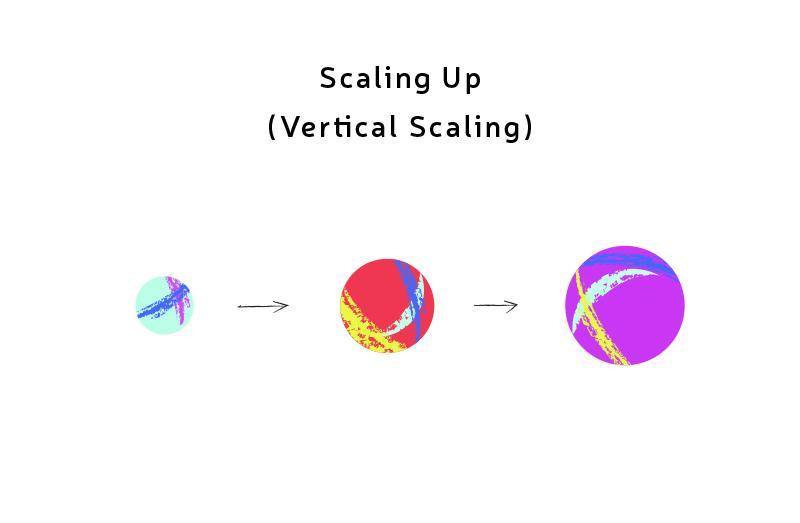 The task to help a company scale-up is aimed at gaining the overall capacity of the business project by increasing the productivity of internal server resources: processors, memory, network capacity, and so on. The server itself remains unchanged in its basic form. 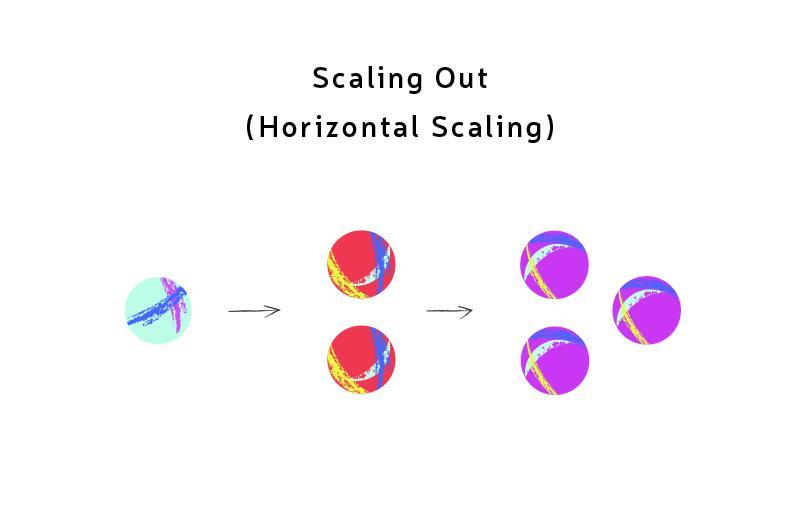 Here is a different case: we increase productivity by using additional servers, which simultaneously perform the same function. We also divide the general system into structural components and distribute these elements into separate physical machines.

Well, there is no definite answer. Each approach has its own advantages. Speaking of scaling up, its main bonus is the simplicity and high speed of implementation. However, there is a downside either, namely, the financial issue. A server with a lot of processors is rather expensive.

Scaling out, on the other hand, is more affordable, but implementing it requires a lot of time and effort. But anyway, the 2nd approach is more promising, as we see it: the load distribution across several nodes seems more reasonable than the endless increase in performance of the single server system.

By the by, you can also scale application software by using the so-called diagonal scaling.

The term was invented by John Allspo, co-founder of Adaptive Capacity Labs. The essence of the method is the harmonious combination of the two approaches to scaling. So, here we're dealing with the vertical scaling of nodes included in a horizontally scaled system.

That is, we scaled out the server infrastructure by adding the necessary number of extra nodes to it. And now, in the next step, we must scale up each of these nodes (increase their productivity).

Are you planning an application project? We're happy to help you! Our experts are highly experienced in mobile app development.

And now it's time to turn to the basics and describe the key fundamentals required to scale mobile app development.

As a rule, businessmen, planning a digital project, are aimed at a quick result and a rapid mobile app development process, and they start thinking about scaling only when the current system doesn’t withstand the existing loads. Alas, sometimes it's too late! Of course, you can always do your best to increase server capacity or add more nodes, but if the structure of your program isn't thought out well, the result will be unimpressive.

The fact is that the complete software reconstruction is time-consuming and resource-intensive. And it’s better to design your app with scalability in mind from the very beginning. In other words, you need to develop solid mobile strategies.

Now, here are some practical tips to help you scale mobile app solutions most correctly, with minimal cost.

Choosing the right technology is the first, and often most important, step if you want to create the best and able to scale app for Android and iOS.

For instance, if a client-side technology provides functionality similar to that ensured by the server, it might be wiser to maximize the use of client software. It will positively affect application scalability.

And we gave only one example of a successful technology choice! Listing others would take too long.

Of course, it’s important to create code that scales, which means selecting the right programming language.

We cannot give you single-valued advice: say, choose this and that. Technologies have been evolving, and a new language may appear, whereas the old one would become obsolete.

Therefore, in your choice, be guided by the following:

Also, for scaling purposes, you need to take care of the formation of a scalable infrastructure of your project.

A great many applications have a standard interaction architecture, but a forward-looking approach involves dividing the project into several key modules. Thanks to such infrastructure, the system becomes much more flexible and suitable for future scaling.

Caching is among the key features of scalability either.

A cache involves saving ready-made results so that you can give them to the client without data processing (which means much faster). Say, a user opens a product page (namely, sends a request). The system first checks whether this block is stored in the cache. If so, it gives the user information from there. If not, it re-collects all the data and stores it in the cache again.

Conclusion: use caching where possible to reduce the load on your system resources.

Other ways to scale a digital app for Android or iOS include taking advantage of the Content Delivery Network (CDN).

CDN speeds up the delivery of content to the end-user due to the fact that the servers are located around the world so that the response time is minimal.

The use of CDN is most relevant when the application is targeted at an audience, more or less evenly distributed across several countries. Otherwise, it may be a loss-making solution.

You'll learn more about CDN and how to use it from our article. Follow the link!

If you really intend to scale application software, then you need to take time and attention to the choice of databases.

There are many various options, and it depends on your specific task which one to choose. Your best bet is to consult the development team you've hired to find out what they recommend and why.

However, before moving on to the next point, we’ll give you a couple of useful tips:

So you’ve chosen the option of scaling out (at least, we hope you have)... what next? How to distribute requests between servers?

There are 2 ways to properly balance the load:

The item is slightly related to the previous one from our list of tips to make scalable apps. Here we’re, again, talking about transferring part of the work (logic) to the client.

When all the work is being performed on the server-side, the problem of the extra load may arise: there are a lot of users, and each sends a request (sometimes simultaneously)... and the server has to deal with it. Why not help it by partly passing logic processing to the client?

Though, you need to proceed with caution, because you cannot predict how secure the user's connection is. So the right decision is to find a middle ground.

Not putting all eggs in one basket

In part, we've already mentioned the issue earlier: say, when we talked about the need to use several database servers or discussed the proper distribution of requests. Shortly put, it’s not possible to make the app scalable if your infrastructure has a so-called point of failure: a single node, on which the performance of your application will completely depend.

We mean the following: don't put all your eggs in one basket, create backup copies when it’s possible, secure the program’s fail-safe performance by distributing its main responsibilities between several nodes.

Almost all applications interact with their users through the session mechanism. The bottom line is to assign each user a unique identification number, which the server can compare with the list of stored IDs and therefore identify the person.

And though it's a great way to better user experience, such a method also complicates the task of scaling your mobile app.

The solution is the Stateless approach: instead of storing session data on the server, we must re-identify the user each time. It is simple, reliable and easily scalable.

Now you know how to scale your killer mobile app, so you can improve and evolve the project without fear that your software would fail to cope with the increased requirements one day. All you have to do is just follow the tips of our article.