How to Prioritize App Features at the Development Stage

How do you prioritize a list of product features?

If you find difficulty in providing an answer or even have no idea what we're talking about, you clearly need to read our article. We'll explain to you the relationship between the program functionality and the success of your digital project.

Why is it so important?

Suppose you have a cool idea for a mobile app, and you're determined to bring it to life. However, the question arises: what features will help your application to become what you intended it to be? After all, it's usually difficult to implement each of your wishes, especially under the conditions of a tight schedule and a limited budget. If you've already thought about this problem, then it's high time you worked out the software development prioritization strategy: a task that every product manager sooner or later encounters.

Fortunately, today you can resort to many popular techniques to prioritize features for your mobile app, from the simplest to the most complex ones based on quantitative and qualitative indicators. All of them are designed to answer very important questions, such as... What to work on first? What are the app’s killer features (those that should be implemented at the initial development stage)? What can be left for future updates of the program and its new releases? And so on!

We're ready to help you. We’ll share our experience and tell you how to prioritize product features, what solutions to use to make it happen, what to take into account when choosing the right model, etc.

Why do you have to prioritize feature development?

The process of creating an application consists of a huge number of steps, and we often described them in our articles. However, all these steps can be considered intermediate stages related to one of three key phases:

Everything is more or less clear with the first and last stages (in any case, they aren’t the topic of our article), but we’d like to discuss the second phase at length.

At the planning stage, we form the image of the future mobile service; among other things, we select primary app features. Otherwise, you would spend invaluable team time and company money on developing ineffective functionality.  Surely, you don't need these financial and labor costs!

Professional product managers rely on intuition and experience in this matter. And it might work, especially in small companies where the app owner is the only decision-maker.

However, the situation changes when there are more stakeholders, interested in success.

Choosing an app development prioritization model is just one of the problems coupled to the implementation of your idea. Let's discuss others!

So, if several people are involved in a project, then you’ll have to consider their opinion too. If not, you're likely to hear a lot of annoying comments, like these ones: “Why did you decide to create such a feature?”, “This thing must be implemented in the first place, it's really cool!”, and so on. You'll have no choice but to discuss the product together, which logically approaches us to the app development prioritization.

Other pitfalls of an intuitive model:

As you see now, an effective project prioritization process should be based on a more objective approach than intuition. We’re speaking of scoring features, namely, evaluating app functionality using weighted factors.

Such a method is good due to the following: 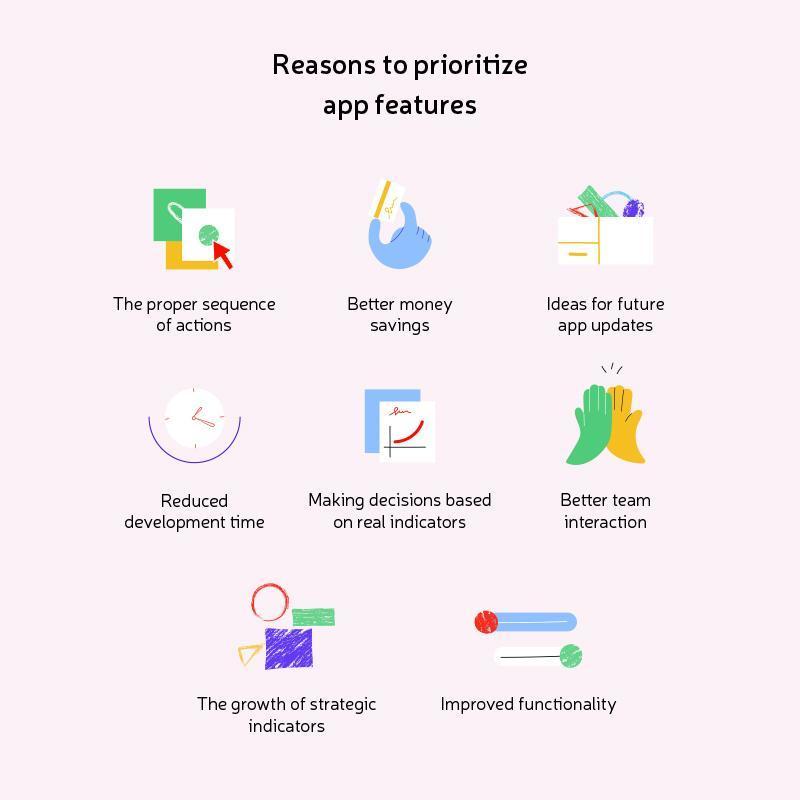 Feature prioritization based on the importance

Understanding what is important and what is not when it comes to mobile development is more complicated than it sounds. And an easy-to-use Kano Model would be able to simplify your work.

The model is named after its creator, the Japanese scientist Noriaki Kano. He distinguished several types of emotional perception by the user of a particular functionality:

Do you find it difficult to prioritize a project? Experts of Phase Discovery will help you!

Of course, you aren't obliged to resort to the Kano Model, you're free to use your own criteria of importance. The main trick is the correct distribution of features according to their potential significance, namely…

The first group includes those features without which your application will be meaningless. Say, Viber or WhatsApp aren't needed anyone without the possibility to send messages.

These features are required to start the project.

Important features, but not required to start

These features are also important and even exciting, but they aren't required as a must-have condition to start a project. In the example of instant messengers, such non-critical functionality includes conference calls or voice typing (and the like).

Potentially cool but not necessary features

These are the so-called 'nice-to-have features': Noriaki Kano attributed them to the Exciters (see above). It means users would be happy to take advantage of these features, but they won’t worry too much if your app doesn't provide such possibilities yet.

And finally, you should take into account premium features to monetize your app.

It's about the Fremium model when the basic functionality is available to everyone, however, some exclusive features are paid. Say, Viber offers to buy bright sticker sets, Skype charges for calls to mobile numbers, etc.

These features can be added later. First, you may monetize your project through advertising.

We described various methods of monetizing the app in another article. Click here to take a look!

RICE includes 4 main criteria, which can be used to prioritize features:

To get a RICE score, you have to resort to the simplest formula: 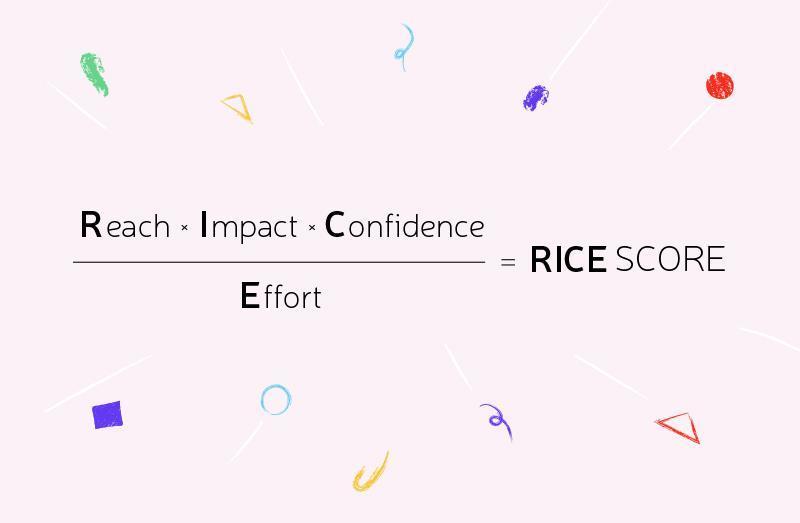 The method invented by Sean Ellis is a bit similar to the previous one, although it involves fewer factors: 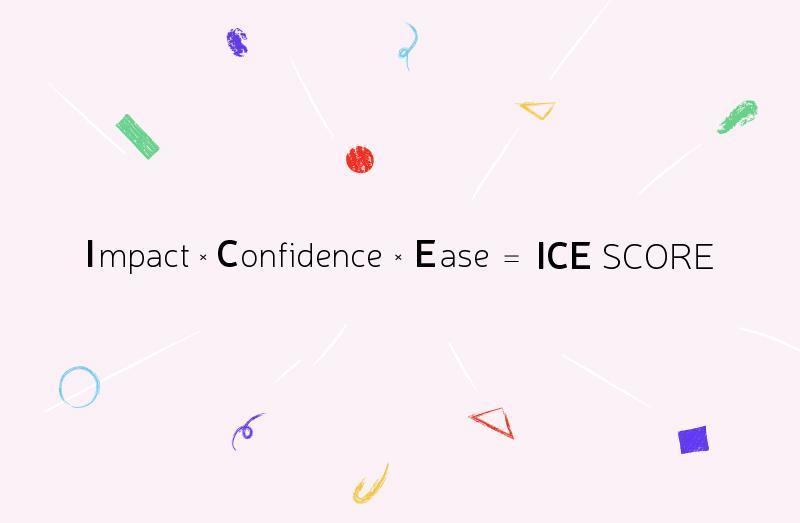 The ICE is based on a scale from 1 to 10. The main thing is to make sure all values are consistent with each other.

The AARRR approach was created in 2007 by Dave McClure, an investor in the 500 Startups venture capital fund. The method gained popularity in a short time period, and the similarity of the abbreviation with the corsairs' scream («Ааrrr!») gave it the nickname "pirate metrics".

If you intend to take advantage of AARRR to prioritize feature development, your main task is to decide which app functionality may force the user to move from one step to another, namely: 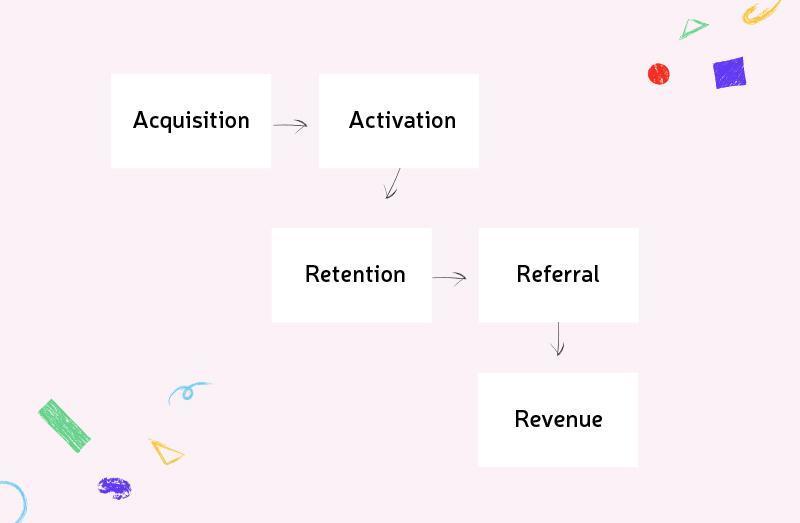 Briefly summarized: you have to compile a list of features for prioritization and think about which ones would motivate a larger number of users to perform desired actions (and, as a result, bring you revenue).

Interested in top-notch mobile development? Our highly qualified experts are at your service!

The author of the methodology is Karl Wiegers, an American author of the book “Software requirements”. With his approach, the following indicators are being evaluated:

As in other similar models, it is customary to use a scale from 1 to 9. Moreover, 2 interested groups are being surveyed:

Based on the data obtained, a priority coefficient is being calculated.

There are still a lot of various techniques to determine your service’s functionality, and new ones appear with praiseworthy promptness. It is impossible to list them all, so we just briefly describe a few more ways to prioritize features for your mobile app:

How to Prioritize Features: detailed instruction

The software development prioritization has been completed, and you have a list of features needed to be implemented first. You may proceed to the next stage of application development.

Now you can put features into your mobile app with confidence in a good result, you just have to follow the action plan described above. Take your time and pay due attention to each item on the list, it's worth it. Believe us, success will not be long in coming.

And remember, the main rule for feature prioritization through scoring is objectivity. No personal judgment: only weighted factors and performance metrics matter.

Do you need help in making a prioritized to-do list for the app? We'd be happy to assist! And we're ready to develop your application from square one.
Helen Vakhnenko
Share
Get in touch
Send us your comments, suggestions, questions, or feedback.
Next posts
What to Do Next if You Have an App Idea: Tips for a Successful Start
Helen Vakhnenko
What Characteristics are Common to the Most Successful Apps?
Helen Vakhnenko
Why You Need to Start Your Project with the Discovery Phase
Helen Vakhnenko