What to Do Next if You Have an App Idea: Tips for a Successful Start

If such a question occurred to you, then you’ll find our article useful. And you’re lucky because you understand that you’ve just started your long path to creating a successful app. Not everyone is aware of this.

On the contrary, many people think that coming up with great app ideas is actually 99% of future profits. Alas, the reality isn't so bright and often deceives our expectations. But don’t worry: we have a detailed plan to solve your problem. All you need to do is follow our tips exactly.

In our article, we're going to explain how to develop an app idea to turn your cherished brainchild into a promising project. Also, we'll describe in detail how to market your mobile app so that it brings you maximum money. In other words, you'll get a clue of what to do if you have a good app idea: step by step.

Okay, let’s get started! Without further delay, read our guide on how to make your app idea a reality.

Turn your dreams into ideas

Actually, you should start the app ideation process with the most accurate formulation of your concept. Because you just think you have a wonderful idea of the app for iPhone or Android. In fact, all you have right now is just a dream, and not a concrete one.

Prepare a full description of your idea, offer app structure in an expanded and detailed form. Believe us, the proper app idea submission really matters!

So, before you're ready to make up an orderly mobile app business plan, clarify the following points:

Detailed answers to the above questions are needed to cultivate your ideas into a concrete plan.

“I have an app idea: what do I do after formulating it clearly?”

Given your question, it's time to talk about how to validate your app idea and compare it with existing ones on the market. After all, you're not going to work in a vacuum, you'll be surrounded by competitors (whether you like it or not).

The collected data can help you proceed to the next stage necessary to turn ideas into apps, namely - to making a prototype.

Make a prototype of your basic app idea

“I have an idea for an app: what next to do if I've analyzed it properly and done my research?”

As we’ve already mentioned, now it’s time to create a prototype - a model of the final product.

According to the readiness stage, prototypes can be divided into 3 types:

an example of the animated prototype

Thus, prototyping is multifaceted and combines both the rough sketches at the very first stage of generating Android and iPhone app ideas and the most realistic interactive layouts. Each type of prototype can serve different goals, but the common purpose is the same: to improve the success of your app idea.

“How to market an app idea? Will the prototype creation be enough?”

Unfortunately, no! You want to make money with your product, right? So, you cannot do without creating an in-depth business plan which should contain the following points:

And, of course, when starting the app business, don't forget to evaluate the possible risks, such as:

Okay, suppose, the plan has been drawn up, and it’s time to get down to business in detail - though, you had better find the development budget first. We have a couple of tips on such a delicate affair.

“I have an idea for an app but no money. What should I do?”

One of the main reasons why some people cannot bring their great app ideas to life is the lack of funds. Hiring mobile developers, as well as testing, deploying, and promoting an application is rather expensive, so collecting the necessary development budget can be a difficult task. What to do in such a case?

Don’t worry, you have a lot of options:

And now let’s talk about how to sell an app idea and make it profitable.

Does your startup need full tech support? We'd be happy to offer the perfect solution!

“I have an app idea to sell but how can I do this? What is the best way to sell my app idea and make my program really popular?”

Here you should recourse to various marketing techniques which are the only way to market your mobile app.

The promotion of a new product is extremely necessary, otherwise, users are unlikely to find out about your idea, no matter how brilliant it is: our world is full of competitive offers - successful apps, similar to yours.

There are different ways to promote an application:

“How to pitch an app idea and turn it into a working program? You beat around the bush, and I want to get down to the real business!”

If you've started losing patience and want to do work, more related to app development, don't worry - we finally got close to the most interesting part, building the application (or, rather, its initial version).

Perhaps, it's appropriate to recall the financial matter once again. We've already talked about the high cost of the app development project and suggested several ways to attract the necessary funds. But what if you don't get as much money as you need to implement your concept in full? What should you do?

Don't abandon your great idea for an app right off the bat! Better get smarter and start by developing an MVP model.

MVP means Minimum Viable Product - an application, which includes only the fundamental features (those without which it cannot do). The MVP approach allows you to create a relatively affordable model of the program (an initial version of your idea of an app for iPhone or Android) and assess the user reaction. In the future, you'll be able to diversify and extend functionality at your discretion.

Earlier, we've discussed, and in great detail, the MVP model. There is no point in repeating: follow the link and read all you need to know.

As you see, the MVP model is a good way to save your money, as well as test your app idea and improve it if needed (based on user feedback).

If we directly discuss the issue of product development, then there are three options to act:

Now that you know your options, let's discuss the next item on our list, namely - the most important mobile app metrics to track.

“I have a great idea for an app, and I did my best to bring it to life as good as possible. However, have I succeeded?”

Yes, the question is good and quite appropriate! To answer it as accurately as possible, let's see the way the majority of mobile applications work:

Each of the above stages has its own performance app metrics characterizing the program success:

Here we can talk about 2 basic mobile app engagement metrics, such as… 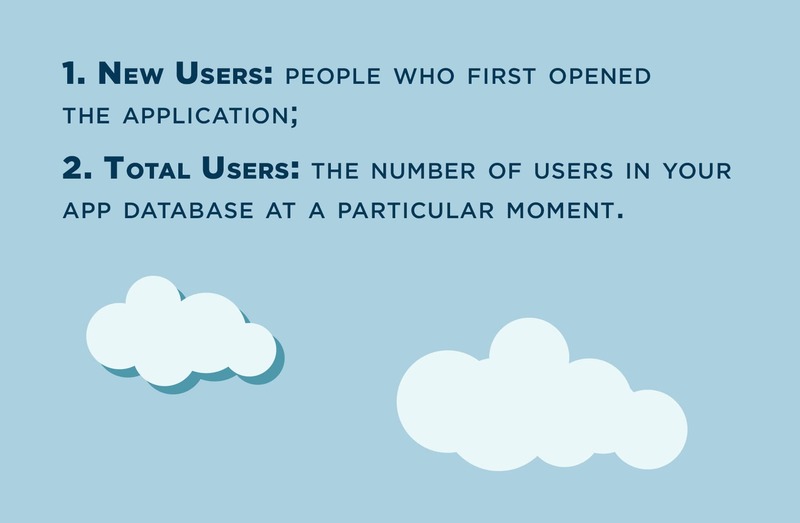 The New Users indicator takes data relevant to the day of reading the metrics. And the Total Users indicator allows you to understand how many people managed to evaluate and test your mobile service.

If the user returns to the application the next day after first opening it, then you managed to impress and retain him. Let's talk more about mobile app performance metrics related to the item in question: 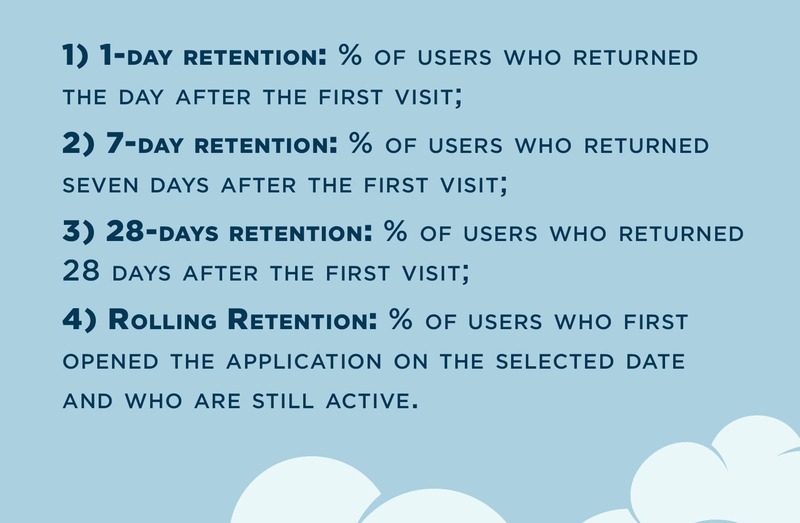 Talking of Rolling Retention, we mean users opened the program at least once in the last 7 days.

And now we're going to list the mobile app metrics which determine the level of activity of your more or less regular users: those that you've managed to conquer. 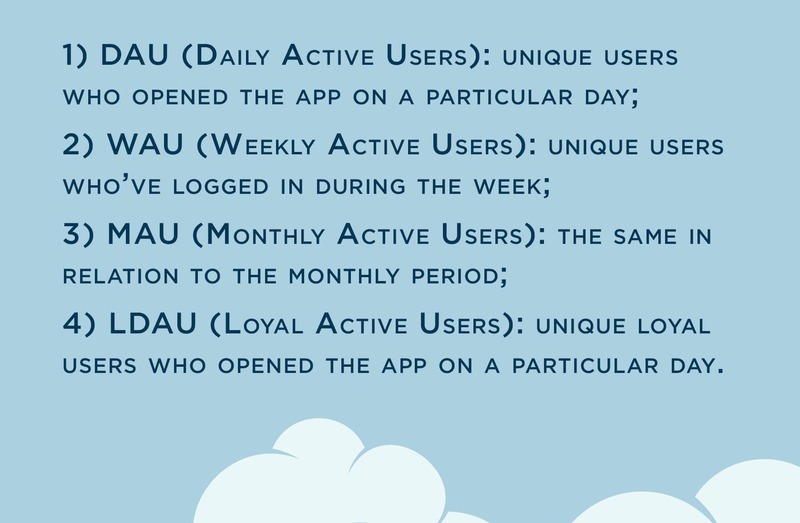 And by the by, the loyal user is the one who opened the application a day after the first visit - and did so at least once.

Discussing the success of Android and iPhone app ideas, one cannot get away from monetary indicators either. We've briefly described them below. By the way, each metric shows the indicator level per day or other established period. 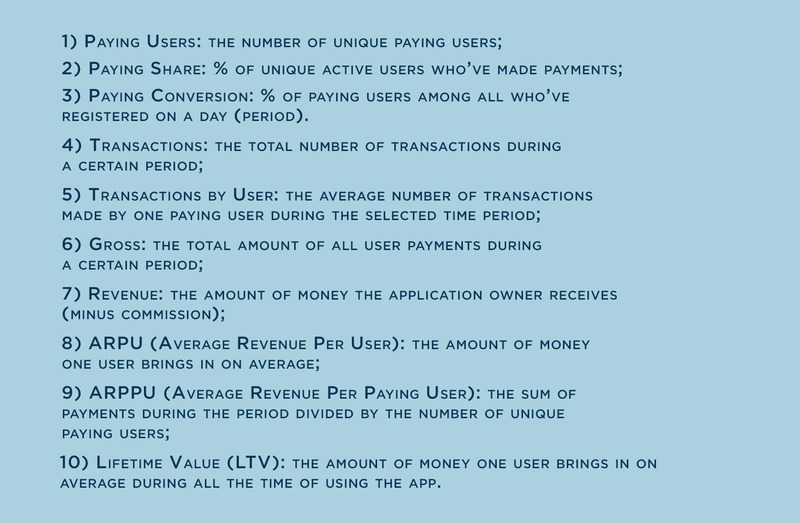 We'd like to clarify that when calculating ARPU, both paying and non-paying users are taken into account.

Also, we want to add a few words about Revenue: in the end, the indicator is the most interesting one because it says about our earnings. Alas, Google Play & App Store take a commission (usually about 30%), so that the app owners receive no more than 70%. And we see the number in our mobile app analytics metrics.

Read here how much money you can make with your app (with the proper approach).

That's all about mobile app performance metrics... moreover, we're close to completing our guide. It remains to add a few final tips to our recommendations, and you'll finally know what to do with an app idea.

In fact, creating an application isn’t the end, it’s the very start, and there is still a lot of work to be done. Competitors are on their guard, users want constant improvements in the program, and indeed, even great app ideas can lose relevance if you aren't paying enough attention to them.

So keep in mind these simple rules:

Okay, now you have complete information on the subject and know what to do if you have an app idea.