How We Used Data Analysis to Detect Fraudulent Transaction

Transaction fraud is a problem that financial companies are constantly facing. And ordinary customers suffer from it either. However, if you learn to detect such frauds in time, the situation will improve significantly. Happily, special types of data analysis can become great assistants in such a matter.

This is what our article is devoted to. We're going to discuss the issue of online transaction fraud detection and describe the main data analysis steps to achieve the desired. And we won't limit ourselves to theory alone. We'll give you an actual example of our own practice.

In the KPMG international study on banking risks, fraud and scam are included in the top 5 challenges, which banks are being confronted with. As 60% of respondents from the information security services of financial organizations admit, they recently noticed the activation of cyber fraudsters, which led to significant losses.

Clients of financial institutions remain at a loss too. According to the BBB Scam Tracker, in 2019 the average American lost $75 to $2,500 (depending on the scenario used) on the tricks of bank fraudsters.

But what is transaction fraud? What types of scams are there and what do bank clients complain about?

How to build a really effective personal finance app? Follow the link to read the answer!

Okay, we've discussed the fraud issue, and now it's time to consider which data analysis to use to avoid these problems. Moreover, we'd like to share with you our own experience and describe a real-life case.

So let's take a look at our financial data analysis example.

What was the primary task?

It all started with the fact that a reputable European company requested our assistance. Its owners instructed us to help them quickly and efficiently identify fraudulent card transactions. As you already understood, this problem is much more serious than it might seem and causes a lot of trouble for financial institutions.

We were provided with a set of transactions of bank accounts (cards) for two payment systems, some of which were fraudulent. And we had to create a reliable transaction fraud detection algorithm.

The data was a collection of transaction information by day. From this point of view, it was considered as a time series {yt}, in which frauds were allocated according to a special algorithm. The result was 2 time series: “normal” payments {yn} frauds {fn}.

In Figure 1, normal payments {yn} marked in blue, and frauds {fn} are highlighted in red. 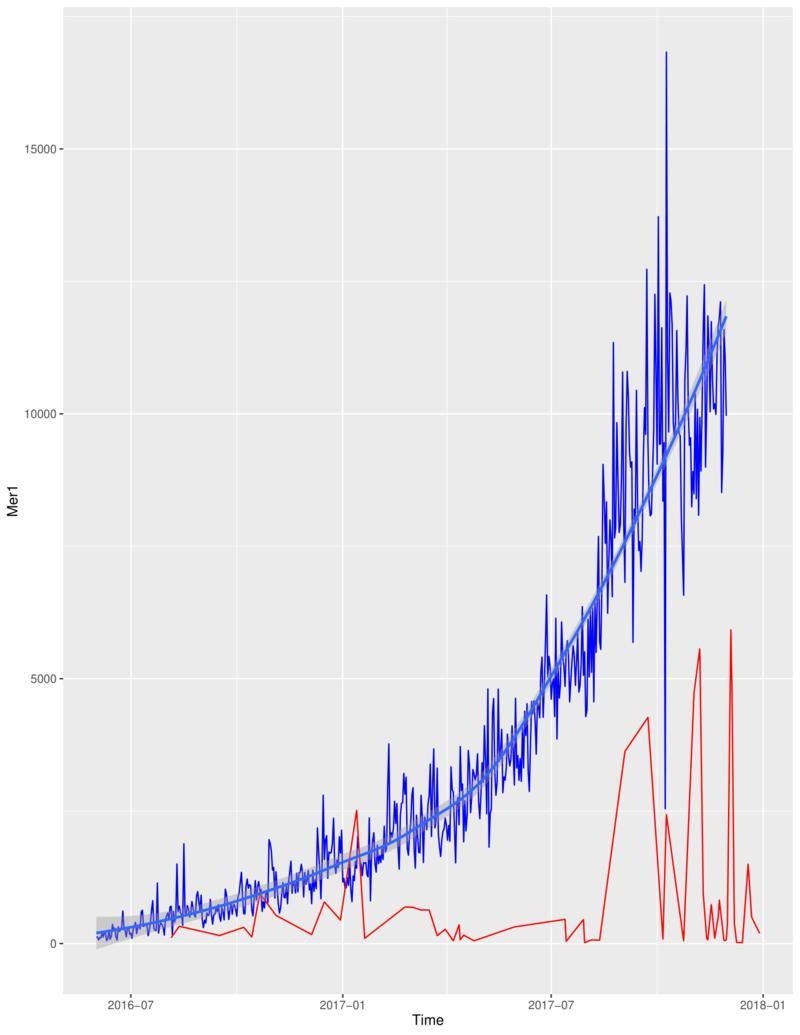 Using smoothing (the red curve in Figure 2), the optimal curve was selected to make a further forecast (Fig. 3). 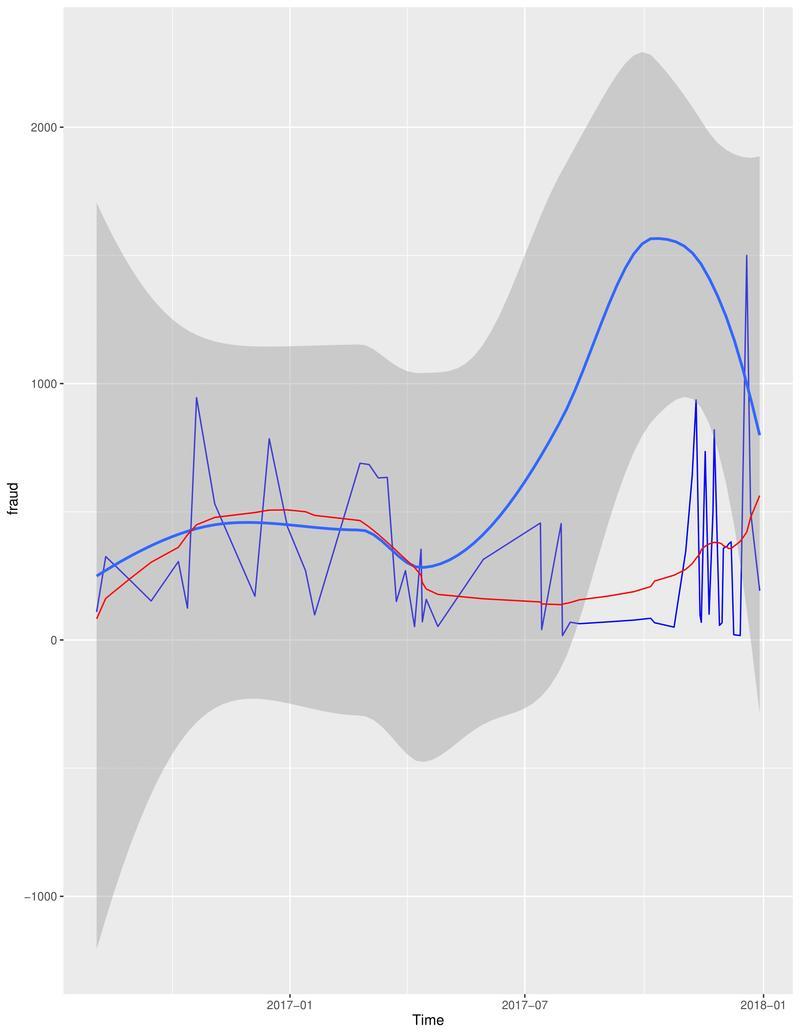 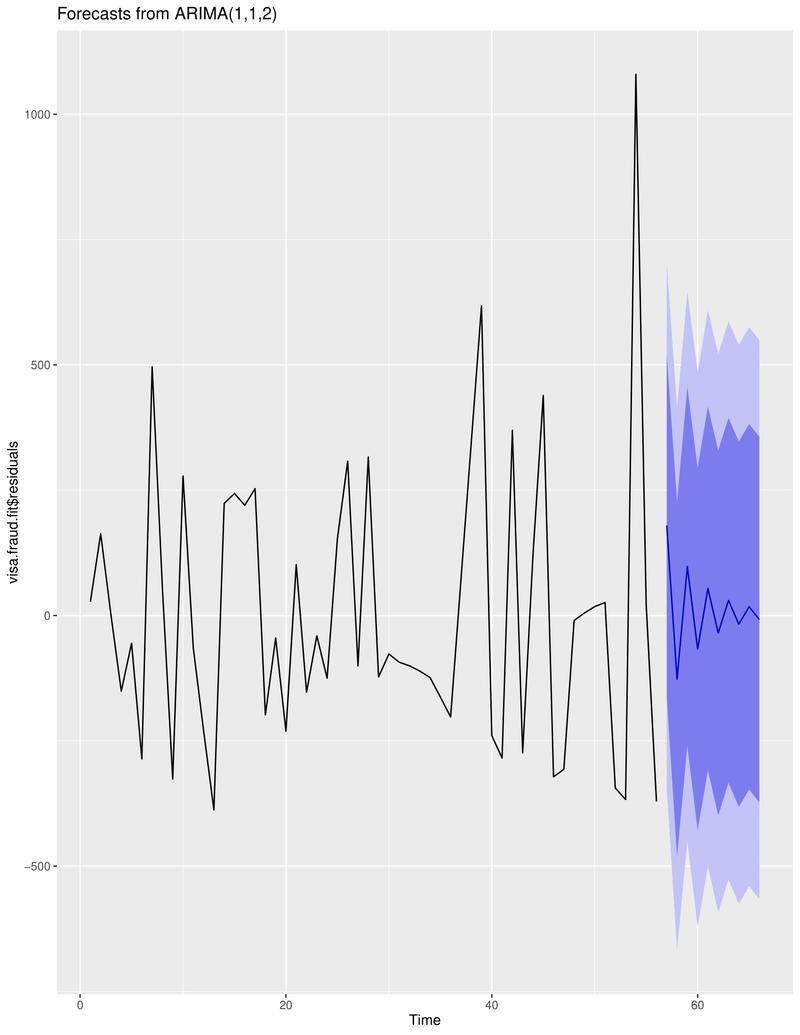 Despite the fact that the series was stationary, we used the ARIMA model (ARIMA (1,1,2), which gave an acceptable result.

Another way to solve the problem

The above outcome is more or less satisfactory, however, there is a small problem. The thing is, the fraud forecast, like any forecast related to the time series, has a confidence zone of the result expanding according to the quadratic law. To be precise, only 2-3 forecast periods (in our case, 2-3 days) can be considered the relevant result. In addition, online transaction fraud detection occurs much later than when it really happens, which forces us to take into account the compensatory amount.

These findings got us to reconsider the approach to solving the problem. And we found another way to implement the analysis of financial data.

We reached the conclusion that it would be more convenient to implement a different principle and first determine the type of payment: normal payment, suspicious on, or fraud. Then it all comes to the classification of the main components in space using the methods of nearest neighbors or neural networks.

Looking for professional web developers? Agilie team is ready to help you with a project of any complexity!

Now, after describing the approximate data analysis process, we'd like to tell you where else it can be used (in addition to detecting financial transaction card fraud).

Other options to use data analysis techniques

So where and when should you apply big data analysis? We'll provide some of the most obvious and sought-after examples.

Here we're talking about statistics in all its forms. As you know, the activity of people in many cases involves working with data, which includes the study, processing, and analysis of information. What's more, the main characteristic of statistical analysis methods is their complexity.

A statistical study and related data analysis can be performed using the following methods:

In this case, we’re dealing with neural networks and classification methods, which are an important part of modern machine learning techniques.

Let's give an example of the problem the classification solves.

Imagine that there are many elements (situations) divided into specific classes (let’s name these elements the initial set). Also, you have a finite set of objects, and you know which classes they belong to. Such a set is called a training sample. What classes the remaining objects belong to is unknown. You have to construct a data analysis algorithm capable of classifying an arbitrary element from the initial set.

The algorithm you created can be used to solve the following problems:

Let’s talk about another case when we might need data analysis techniques, namely, web scraping.

In a broad sense, web scraping is the collection of information from various Internet resources. The useful data category may include:

Graph theory belongs to discrete mathematics and is widely used in solving various problems in different fields of activity, including economics, programming, communication, and sociology.

Using social graphs, we deal with the following issues:

Though, the data analysis process in the case of social graphs is associated with a number of difficulties, such as differences in social networks and closed social data.

Analysis of medical data allows you to bravely face such problems as:

We've examined the key data analysis steps and described how to implement transaction fraud detection. And we sincerely hope our review would be useful to you.

Do you need to conduct a competent analysis of financial data (or data related to any other field of activity)? Contact us, we'd be happy to assist you!
Helen Vakhnenko, Sergei Teteriuk
Next Posts
21 Vital Mobile Metrics to Make Your App Better
Wondering what are key mobile app metrics to monitor?
Anastasia Taran
Full Guide on Managing Remote Development Teams
Do you want to build a good remote team? Read this...
Helen Vakhnenko
Juicy Mobile Trends for 2020 And How Your Business...
Follow the link and read about top mobile app development...
Helen Vakhnenko