How Much Does It Cost to Make an App?

How much does it cost to start an app?

The question is fair enough. After all, not less than 85% of startups are app-oriented (in a varying degree). According to statistics (statista.com), the number of downloads of mobile applications had reached $ 44.4 billion in the first two quarters of 2017. In comparison, over the past year, users have launched about $75.7 billion Android and iOS apps. You cannot ignore such dynamics, for it means the market is growing rapidly.

If you want to get a slice of this "cake", you should create an app which really solves the problems of your potential users. But, of course, you'll be faced with difficulties during the process... Among others, you're likely to be interested in answers to the following questions: how much does it cost to make an app? And how to choose the team of skilled developers?

Let's discuss the issue in detail, step by step!

Today, more and more people prefer to take advantage of applications. In a rapidly developing environment, it has become really convenient to get information using mobile devices: no matter whether we’re standing in a queue, drinking coffee in a cafe, or doing business. 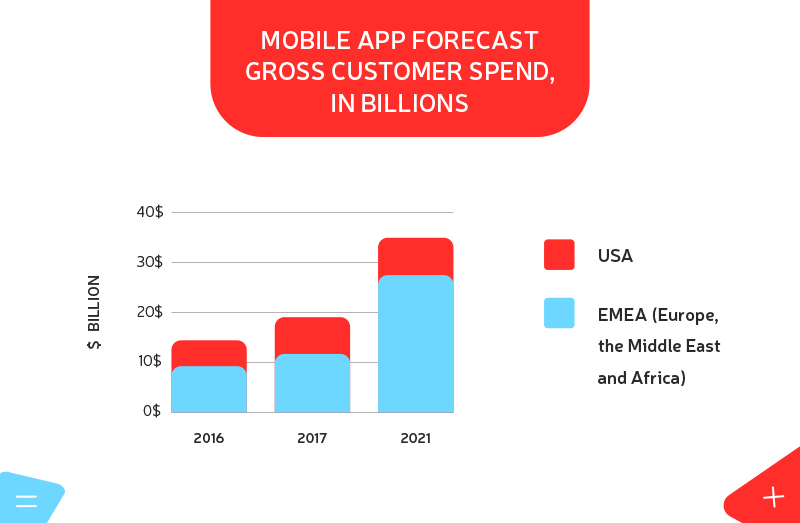 As you see, the game is worth the candle, but what is the average price of such a game? We mean, how much does it cost to build a smartphone app?

However, before moving on to the main issue, let's look at what types of applications there are and how you can make a profit with their help.

This is the most common app type. Such mobile applications are written in programming languages approved by software developers for each specific platform, so they can be organically integrated into the operating systems. These apps meet all the requirements of App Store or Google Play.

Native applications can work fully or partially even if there is no Internet, so users are less dependent on the quality of the wi-fi connection.

Of course, the process of making an app requires the developer to have special knowledge and skills to work in a particular development environment. In fact, he has to create a separate product for each platform. As a consequence, the app cost is higher.

#2. Web applications and mobile version of the site

These apps are based on web technology so that they’re able to work seamlessly on a mobile device. The main and undoubted advantage, in such a case, is cross-platform property. It means one should create an app just once, and it will operate on different platforms.

However, there are also drawbacks. For example, these apps don’t allow you to use a camera or geolocation features of your smartphone, and you cannot download the mobile program from the application stores.

A hybrid (or cross-platform) app is similar to a native one. It is something between a native application and a web one. Such programs can be installed through official stores, they have limited access to the hardware of smartphones and tablets, and allow you to configure push notifications (as opposed to web applications). Also, they are usually cheaper than native applications, so the cost of making an app can be greatly reduced.

The quality and capabilities of hybrid applications depend on the framework used by the app developer.

Choose the type of a mobile application (or, rather, the development approach) based on your main goals. Be careful: in the end, you don't want your clients to get negative impressions and delete the program shortly after installation. Agree, it'd be difficult to persuade them to download your mobile app again, even if you have significantly improved it.

Ways to monetize your app

In addition to the question of “How much does an app cost (to make it)?”, you’re probably interested in possible ways to monetize your mobile service. We offer a few simple but effective options:

It's up to you to decide which monetization method to opt. Of course, it’s an important factor which should be considered when developing a mobile application. So take your time and think the matter over.

And in the meantime, we’ll proceed to the next important issue, namely…

What does the cost of application development depend on?

How much does it cost to build an app and what affects the final price? What experts do you need to successfully work on the project? Is it possible to save during the app development process? What factors should you consider choosing development agencies? Surely, these questions are very interesting to you, so let's try to answer them.

The cost of developing an app for iOS, Android or Windows Phone is determined by the following criteria:

Let's take a look at some of these points in detail.

A high price doesn’t always indicate a high quality if it concerns mobile application development. It becomes obvious if you compare the rates of agencies from around the world.

Rates of app developers of the same qualification for 1 hour of working time:

Analyzing these data, we can conclude that the cost of application development is highest in the USA and Great Britain, and the best ratio of quality and price is offered by app developers from Ukraine.

The level of app complexity

The actual cost to build an app depends on the amount of work the team fulfills. Here are the parameters which affect this factor and, accordingly, the mobile development budget:

Of course, we gave you just a brief overview. The more complex your application becomes (the more app features you want to add), the more time and money the development agency would need.

By the by, what experts should you hire in order to build an app?

The key question of our article (how much does it cost to build an app?) should be put to those who will participate in your project. But who are they, these people?

Why do you need them?

Such a scheme clearly demonstrates why you must hire so many people to create a competitive application. Obviously, you won’t be able to cope with the task at a high level on your own.

How much does an app cost, to design it?

Don’t forget to find out the answer to the above question because UI/UX design is another extremely important part of the app development process.

Competent design is an intuitive guide helping a user solve his problem. The program interface should be simple, clear, intuitive, user-friendly: in other words, make sure your customer needs only a few taps to achieve his goal.

Speaking of the cost to build the custom design, it all depends on the number of screens and the orientation of the image. 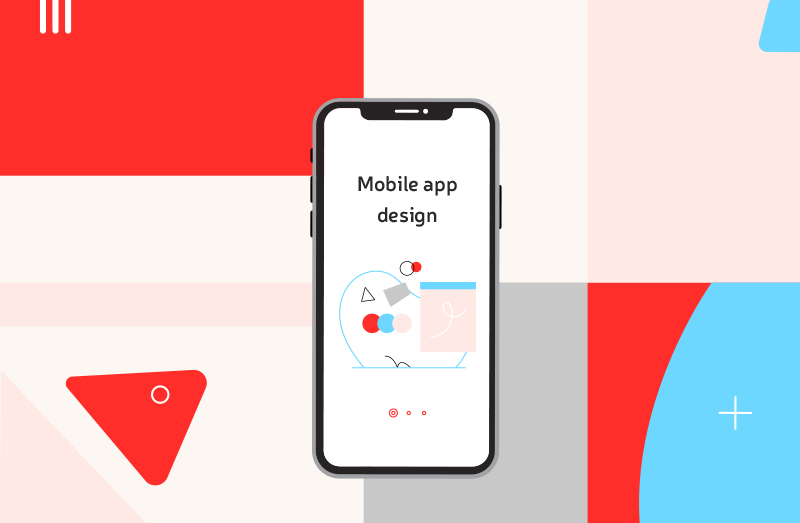 We’ve told what affects the average cost to develop an app and now would like to discuss the ways to reduce it.

How can you reduce costs when building an app?

Suppose you asked a question (how much does it cost to create an app?) and got your answer, but you didn't like it, the price seemed too high. What should you do in such a case? What must be envisaged in the development process and how can you save?

We'll figure it out point by point.

In order to avoid overpaying, you must foresee all possibilities when making an app, namely:

What can you save on?

What are the options for reducing mobile phone app development costs? We propose to consider the following ways to save: 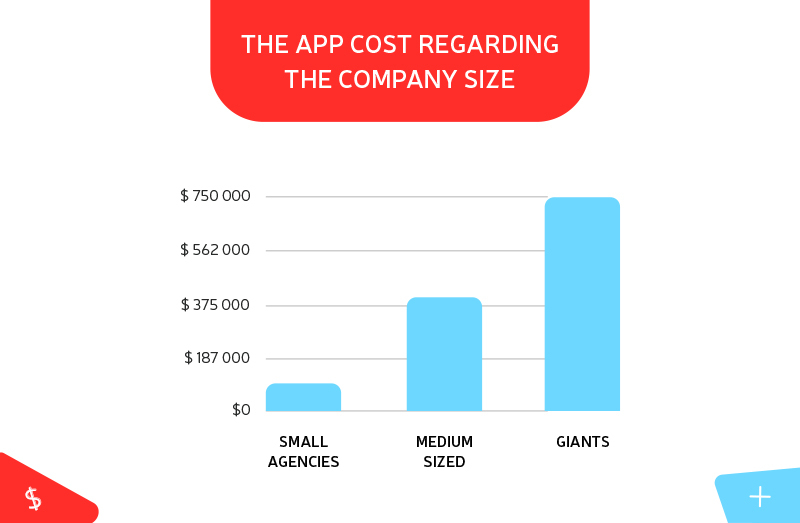 If you want to reduce your cost of application development, don’t be guided by the size of the company. When choosing an agency, focus on the quality of pieces you see in its portfolio.

You may be wondering about the cost of the already built apps - programs which have proven their usefulness and high demand. We can unravel a mystery and tell you the average cost to develop an app of the Uber model. Believe us, the scheme used to create the Uber app would come in handy not only for taxi service but also for product delivery, medical online consultations, etc.

The creation of the Uber-like application will take about 400-700 hours. The back-end development will take another 300-400 hours. Of course, you still need to consider the time required to build the admin panel (about 50-80 hours). As a result, we have 750-1180 hours for the entire development process.

Taking into account the hourly rates of mobile development (mentioned earlier), we can calculate the approximate cost of making an app in different regions: 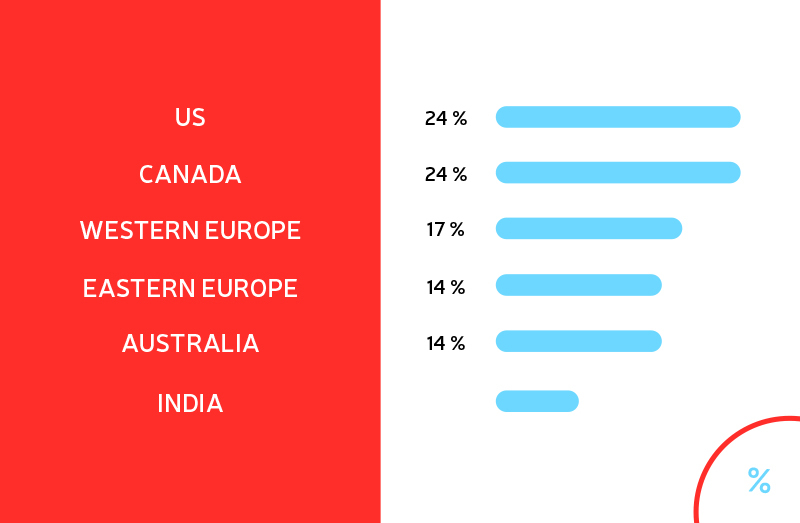 As you see, specialists would answer the question "How much does it cost to develop an app?" in different ways, depending on their location.

And now it’s time to look at the cost of creating an app in stages.

How much does it cost to make an app?

Estimation of the mobile app development cost of is a creative process, for each project is unique, and there are always a few ways to implement the functionality you need. But our experts are experienced enough and able to make an approximate appraisal of the required budget.

First of all, we always divide the project into stages, such as:

Our experts analyze each stage and give an initial estimate of the likely costs.

However, to give you a more accurate answer about future expenses, let's see what stages the app development process includes.

Stages of the app development process

The process of making an app consists of several consecutive stages. Deadlines at each stage may vary depending on the complexity of the task.

Now that we understand the way of building an app, we can get a better idea of our future costs.

We’d like to provide you with a kind of an app cost calculator. It'll come in handy if you need to plan your development budget.

Having such data and knowing the rates of agencies around the world, you’ll get your final answer. Of course, we suggest that you focus on the cost to build an app in Eastern Europe. Such an option is affordable in price and impressive in quality.

So you had a simple question: how much does it cost to make an iPhone/Android app? Hopefully, we've answered it. But let's summarize:

We offer our mobile application development services and guarantee you a full cycle of building an app. It includes analysis of the competitive environment, functionality and design creation, competent testing, and subsequent product support.