Business and Technical DevOps Benefits for Your Project

Modern tech companies ignoring a DevOps business model are doomed to failure. They'll soon be surpassed by competitors: startups which have paid attention to this issue; therefore their products are being released faster, and their servers aren't being idled by a malfunction or during maintenance periods.

But what is meant by DevOps? The word sounds unfamiliar, intriguing... and rather obscure. Don't worry! We're going to illuminate you on the topic.

We'll answer the questions that may interest you. For example... What is a DevOps environment? Why do we need these experts? What knowledge should they have? What are DevOps tools? And so on!

Interested? Then read our article to find out all the details.

What is DevOps engineer?

DevOps stands for Development Operations. And if you think DevOps is the name of a profession, then you’re mistaken. Actually, it's about a technique or even a culture.

What is DevOps culture?

Before answering the above question, as well as explaining how DevOps can help your business grow, we’d like to discuss the history of DevOps methodology. Why did it appear in the first place?

It all started in 2008 when there were a lot of accumulate problems related to the ineffective interaction of development and operation teams.

Imagine the situation. Developers, making sure that the code works locally, run it in production. However, problems still arise, and the operation team begins to resent: «These are not our problems, it's about the wrong code! The developers must figure it out!». As you understand, it leads to disputes and, as a result, delaying the release of products.

That’s when it was decided to implement DevOps principles.

Why do we need DevOps?

DevOps is a methodology designed to improve software development practices with the active interaction of developers, QA experts, and others: all specialists working in sync on a certain service or product. And, of course, someone should be responsible for ensuring such integration of mutual efforts. As you understand, this "someone" is a DevOps engineer who oversees the solution of problems which might arise at any stage of the system upgrade or operation.

By applying the DevOps implementation approach, companies are able to quickly create and update their software products and services: those that are already actively working and being used by people in real-time. So any changes and improvements should be made very carefully. 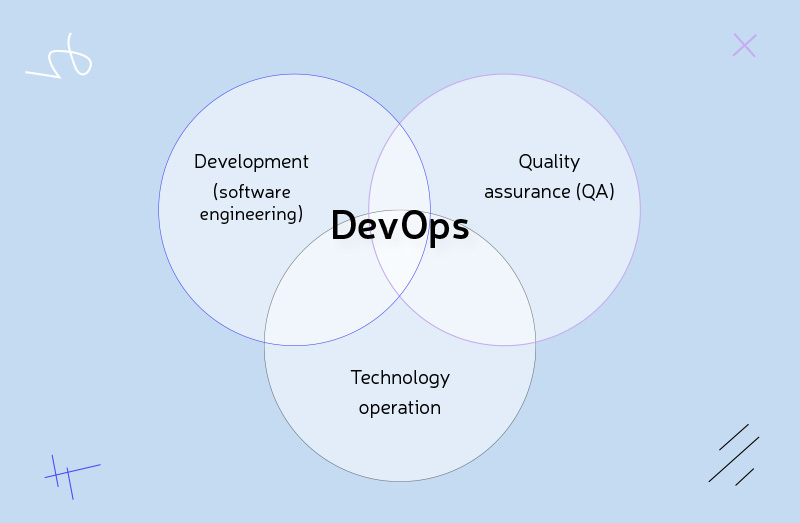 What is the role of DevOps engineer?

Conventionally, there are several key roles in the DevOps culture:

What companies should implement DevOps strategies?

Any organization whose activity is related to developing applications or managing a large number of servers would benefit by hiring DevOps engineers. These experts are working with such giants as Amazon, Adobe, Walmart, Facebook, Netflix, Etsy. Rather impressive, right?

Of course, small startups, whose task is to launch a minimally viable product and test a new idea, can do without DevOps assistance. Although, even then, it’s not always the case… but first things first.

What is the difference between Agile and DevOps?

Before describing the key aspects of DevOps models, let's take a look at the issue which often causes some sort of confusion.

We mean this one: what is Agile vs. DevOps, what is the difference between them? Can these methodologies replace each other?

What is Agile software development?

Agile is a software development technique which involves only this particular process. After the software is released, the developers stop being responsible for it and move on to another task.

Agile business strategies can be implemented in different ways, among which is extreme programming, scrum, scrumban, kanban, etc.

What is DevOps methodology compared to Agile?

As with Agile, there are many ways to implement DevOps strategies. However, all existing options have a few things in common, namely: close interaction between software development and operation teams, as well as automation of software deployment processes.

Moreover, DevOps experts say that ensuring maximum software reliability is more important than the speed of its deployment.

Trying to find the best cloud platform? Click here and read why you should choose AWS!

By the way, though the two described methodologies (Agile and DevOps) use different methods and approaches, they're able to work together.

What do DevOps engineers do?

We've already touched upon the question, and now it’s time to systematize it a little bit.

The thing about a DevOps engineer is that he combines many professions including admin, developer, tester, and manager. He synchronizes all stages of creating a software product: from writing code to testing and releasing an application.

What is DevOps technology in practice?

Simply put, the DevOps engineer is responsible for any automation of tasks related to configuring and deploying applications, as well as monitoring software.

Now it remains to decide on what is better to focus on to implement DevOps best practices - depending on the size and stage of the company development.

Why is DevOps good for business?

This is not about the business value of DevOps; we'll discuss these benefits at length in due course. So far, we want to tell you how the size of the company correlates with the DevOps implementation approach.

#1. Startups and small business (up to 5 people)

Why DevOps is important in the case of small businesses? What should these experts do?

#2. Companies in the stage of active growth and medium business (5-20 people)

DevOps for businesses of medium size must do the following:

What is a DevOps model as applied to large companies? Let’s see…

DevOps can improve a business in several ways:

So, what is good about DevOps from a technical point of view? 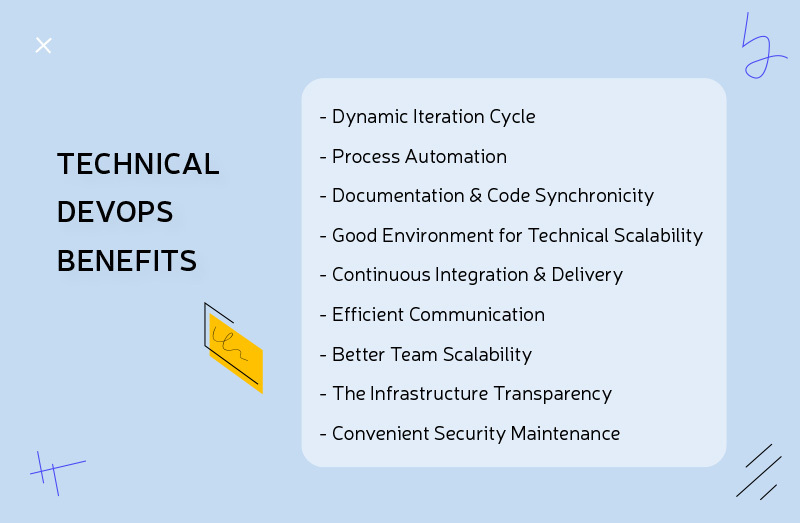 If we analyze the above advantages, we can say that technically, DevOps improves interaction within the development/operation team, helps to actively develop and scale the project, contributes to the structuring of the infrastructure, and automates as many processes as possible. In short, the effectiveness of software development increases significantly.

What is DevOps developer's background?

Joe Sanchez, a DevOps expert from VMware (a virtualization software development company), explained what skills a DevOps engineer must have. Of course, he should be familiar with the DevOps methodology, but it's clearly not enough! Therefore, such an expert needs to have:

In addition, the DevOps engineer must have a good technical outlook and a desire to self-improve and learn new tools and technologies. It’s crucial because DevOps methodology is constantly evolving.

So, we hope now you understand what is meant by the DevOps methodology and why it is important to allocate resources to implement these practices. And if your budget provision hasn't been made to cover such expenses, start small, from the simplest level. Over time, you'll manage to create a system which effectively meets the needs of your users.

And, of course, let us know if you have any questions or need competent advice.

Let's build a DevOps business case together!
Helen Vakhnenko
Next Posts
Most Vital Third-Party Integrations for E-commerce...
Creating an online store, you have to provide your...
Helen Vakhnenko
Security over SSL Protocol: Basic Principles and...
If you want to protect your site, you should use a Secure...
Helen Vakhnenko
10 Benefits of Choosing AWS as Your Cloud Platform
Looking for a reliable cloud platform for your website?...
Helen Vakhnenko