Why Is It Worth To Choose Ruby on Rails For Your Startup?

Surely you have heard such names as GitHub, Twitch, Airbnb, Shopify... Each of them is a bright player in its market! But do you know what unites them, in addition to the popularity? The answer is the framework they are written in. The fact is that all of the above resources are great Ruby on Rails project examples. Yes, as you see, these successful startups prefer RoR.

Of course, there should be a simple explanation of the demand for this framework. And really, why do market leaders decide on building a website with Ruby on Rails?

We know the answer to your questions and are ready to share our experience with you. We’re going to tell you which programming language to choose for your startup project and explain why RoR is the perfect solution to your problems.

What is the Ruby on Rails framework?

To begin with, the TIOBE index (an index using search results) ranks Ruby among the TOP 20 popular technologies. And keep in mind, when it comes to IT, the word “popularity” has nothing to do with celebrity fame. You see, users want to get a fast, safe, and intuitive product, whether it be a website or a mobile application, and they can't care less about the details. And since RoR helps in this, it has become popular. Do you get our point?

In the end, what is the difference in how the developer achieved the result if the service he created works efficiently, makes a good profit, and users like it? And Ruby on Rails website/mobile development allows achieving these goals in the simplest possible way. And this is exactly what we need, right?

So, it's not unreasonable to assume that RoR would be the best choice for your startup. And we'll justify our statement (meaning, why to use Ruby on Rails) in due course of the article.

By the way, are Ruby and RoR the same thing?

The difference between Ruby and RoR

Ruby is a programming language with a convenient and understandable syntax.

On the other hand, Ruby on Rails is a framework written in Ruby; it’s a technology aimed to facilitate the development and integration of various project components.

So you see, the concepts are closely related, although one of them is the language, and the second is the software that depends on it.

A bit of history

The creator of Ruby is Yukihiro Matsumoto (or simply “Matz,” as he is often called). His goal was to combine all the best existing in his favorite programming languages (Ada, Perl, Eiffel, Smalltalk, and Lisp). And today Ruby positions itself as a pure, object-oriented (OO), general-purpose language.

Some mistakenly believe that Ruby appeared on February 24, 1993. However, in fact, only its name was invented on the day in question. The first public Ruby release (v.0.95) was announced at the Japanese news conference on December 21, 1995.

As for the international glory of Ruby, it all started after the translation of its documentation into English in 1998.

And what about RoR? What made Ruby on Rails software development possible?

The RoR framework was released in 2004. It was created by David Heinemeier Hansson (jointly with 37signals), and then improved by numerous open-source developers.

The key events in the history of RoR were the release of Ruby 1.8.0 in 2003 and the new version of Ruby on Rails 2.0 in 2007. Since then, building an eCommerce website using Ruby on Rails has become a very popular (and smart) step.

So, when do you need to seek help from a Ruby on Rails web development company? We list a few cases:

Anyway, order Ruby on Rails development services, if your goal is to get a powerful scalable web resource... no matter what it is about and to which market it belongs.

Don’t believe us? Check out the list of the cool Ruby on Rails projects below. It will certainly impress you!

We’ll start the description of the best Ruby on Rails websites with the project known to all programmers.

And they do know it and use it a lot because Github is a platform for the developer community. Its success proves that RoR can support the fastest-growing projects with a huge user database.

Among famous startups using Ruby on Rails is also this one.

Dribbble is an online service intended to bring together illustrators, web designers, and 3D visualizers: each of them can post his pieces, as well as rate and comment on projects of other community members. The platform is RoR-based (as you may have guessed) and belongs to the most popular design social networks.

Shopify is a complicated web application allowing users to easily create their own online stores with a great many settings. The platform is also RoR-powered and supports more than 500,000 customers. Still further, Shopify has constantly been adding new features, which confirms the scalability of software projects with Ruby on Rails as a basis.

Basecamp is a paid client-server project management system from the RoR creator (David Heinemeier Hansson, as you should remember). Obviously, it would have been at least strange had he chosen another technology to build his own product. Of course, he selected RoR application development!

More than 2 million people take advantage of the Basecamp platform, and it continues to grow. In fact, many of the RoR innovations began as experiments within Basecamp.

Listing big companies that use Ruby on Rails, we have to mention Airbnb either.

As you’re 100% aware, Airbnb is a world-renowned resource helping tourists in finding accommodation of all sorts so that they won't have to pass the night shelterless. It was the use of RoR that provided the flexibility and scalability of the Airbnb platform. Also, such a smart choice contributed to the rapid development of Airbnb, thereby freeing up space and time to add new features.

Twitch is an online video game broadcasting service. The goal was to create a special gamers' community, which it did. And today Twitch users are actively enjoying the site's benefits: they play, communicate with each other, and watch other gamers’ battles live and in recordings.

Can you imagine how powerful such a resource should be? And the RoR web tools managed to cope with the task and provide Twitch with proper efficiency. The platform runs like clockwork and can withstand even very high loads.

By the by, do you want to know how to create a site like Twitch? We have something to say about it. Click here and read our tips.

Our list of companies using Ruby on Rails concludes with Kickstarter.

Kickstarter is a resource focused on attracting money investments to help site users implement their creative or scientific projects. It works on the crowdfunding scheme which is so popular today.

Of course, the platform owners had to take care of security, scalability, and other significant parameters. And RoR turned out to be a great choice in this respect.

All of the above online platforms are impressive, right? Do you want to take up their lead? Then start by ordering our web services!

Certainly, there is a much greater number of Ruby on Rails website examples; we've described only a few of them. And now we’re going to tell you why Ruby on Rails is so popular among developers and their clients.

Why choose Ruby on Rails

Future site owners keep choosing Ruby on Rails for startups... why so? What advantages have made the framework so sought-after and requested?

The key advantage of Ruby on Rails is its development speed: RoR projects can be created 35–40% faster than platforms powered by other frameworks.

The increase in development speed is due to numerous factors, including: 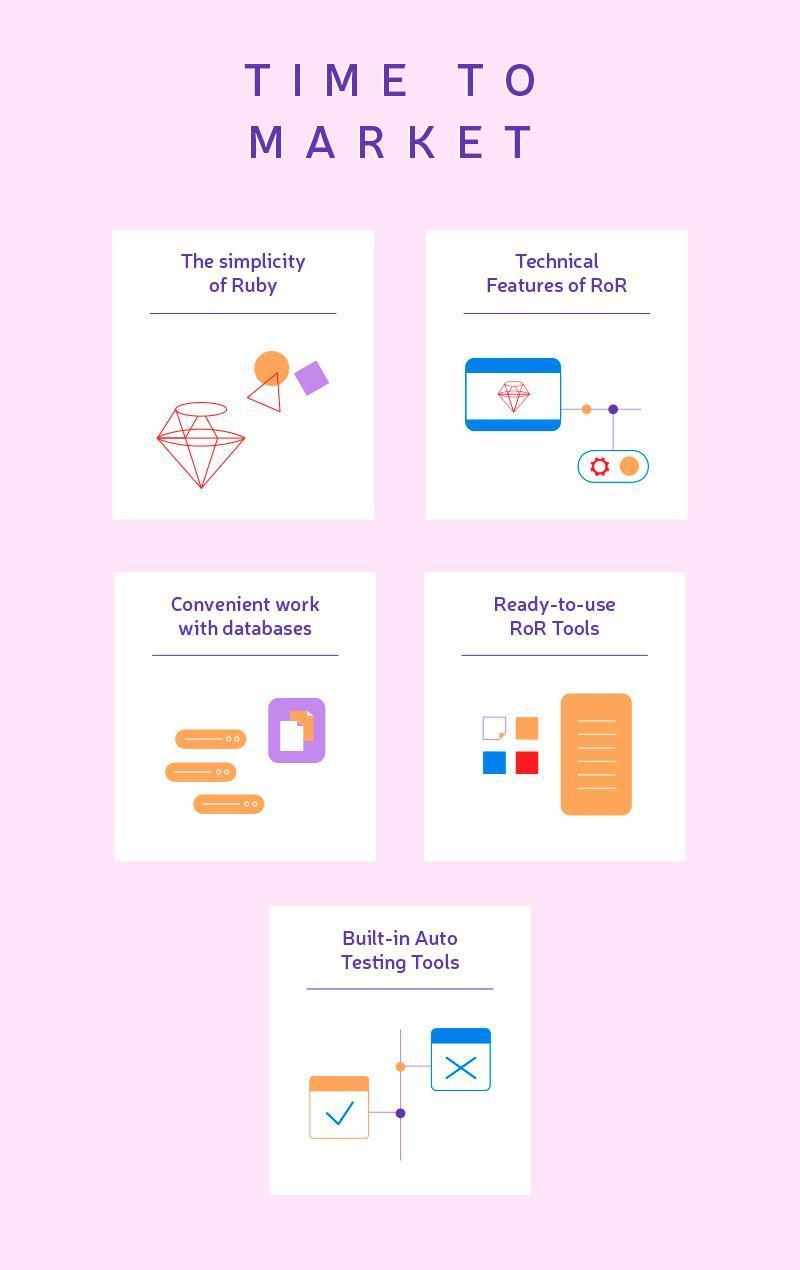 The second important factor driving the popularity of RoR is the scalability of the framework. In the end, your company is likely to grow, and you had better foresee such a possibility at the project start.

Luckily, startups using Ruby on Rails are highly scalable and therefore able to meet changing business needs. Among other things, RoR would guarantee that your resource can cope with any number of visitors.

Imagine: you created a site using the newfangled framework... which soon ceased to be supported! Such an unpleasant twist will have a very bad effect on your project either, of course. But don't you worry: nothing like this can ever happen with Ruby on Rails. We've told you the story of its development, and you understand that RoR belongs to the time-tested technologies. Moreover, new framework versions are constantly being released: with its improved and updated features.

By the way, another RoR version was released in the spring of 2019. Do you want to know what's new in it? Read the article!

And one more thing... remember, we talked about convention and simplification of configuration? So, compliance with conventions allows writing of intuitive program code, which can subsequently be modified without problems in a short time period, - and by any developer (not just the one who wrote it initially).

The cost-effectiveness of ruby ​​on rails projects is explained by the open-source code the framework is based on. RoR technology is provided under a free MIT license (Massachusetts Institute of Technology) and equipped with an ecosystem of ready-to-use tools speeding up and cheapening the development process.

One more reason to choose Ruby on Rails to build websites is the high-security level.

You’ve probably read articles about hacking online resources more than once. You don’t want something similar to happen with your web platform, do you? Fortunately, the RoR developers took the protection issue very seriously. When using the Ruby on Rails tools, SQL injections and XSS attacks are excluded. Besides, RoR initially contains encryption of passwords and credit card data (and all personal user data), and input parameters are shielded by default. Your developer simply has no chance to mess up with security.

Another advantage of using Ruby on Rails to build a website is the large community of RoR developers. What does it give you as a potential owner of a web resource? Your question is easy to answer!

Firstly, such a professional community confirms the popularity, relevance, and supportability of the technology.

Secondly, you’ll face no problem with finding the Ruby on Rails development company for a startup. You can easily hire the right experts.

Among the additional reasons explaining why Ruby on Rails is good are these ones:

Using Ruby on Rails to build a website doesn’t necessarily lead to prosperity, but let's face it: a lot of new successful startups are based on RoR for some reason. Mostly because the framework in question significantly increases their chances of becoming profitable. After all, why not? Ruby on Rails is able to help in writing quality code, which leads to spending less time testing and launching the product. You'll receive an excellent competitive edge and get a perfect chance to start earning your income as quickly as possible.

However, we've already described key Ruby benefits, why the extra words? Let's better get down to business!