What is Software Reengineering?

Software reengineering is the process of creating new functionality or eliminating bugs by making a revolutionary change, but using software that is already in use. The reengineering process is described by Chikofsky and Cross in their 1990 paper as "The examination and alteration of a system to reconstitute it in a new form". In less formal terms, reengineering is the modification of a software system after it has been reverse-engineered.

Re-engineering can be divided into seven stages, and the work involved, starting from the initial stage of determining the feasibility, effectiveness and cost of re-engineering and construction of a functional model. 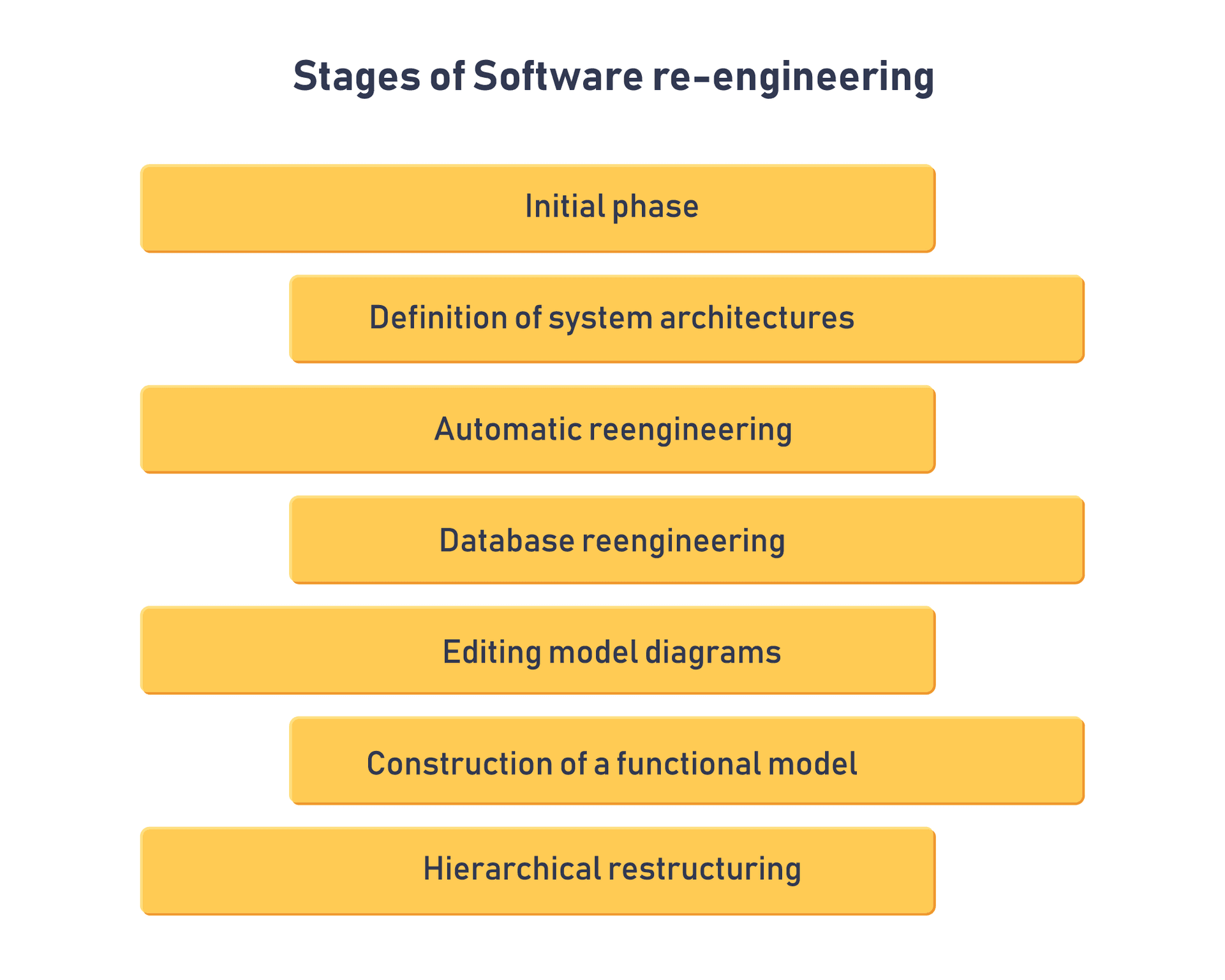 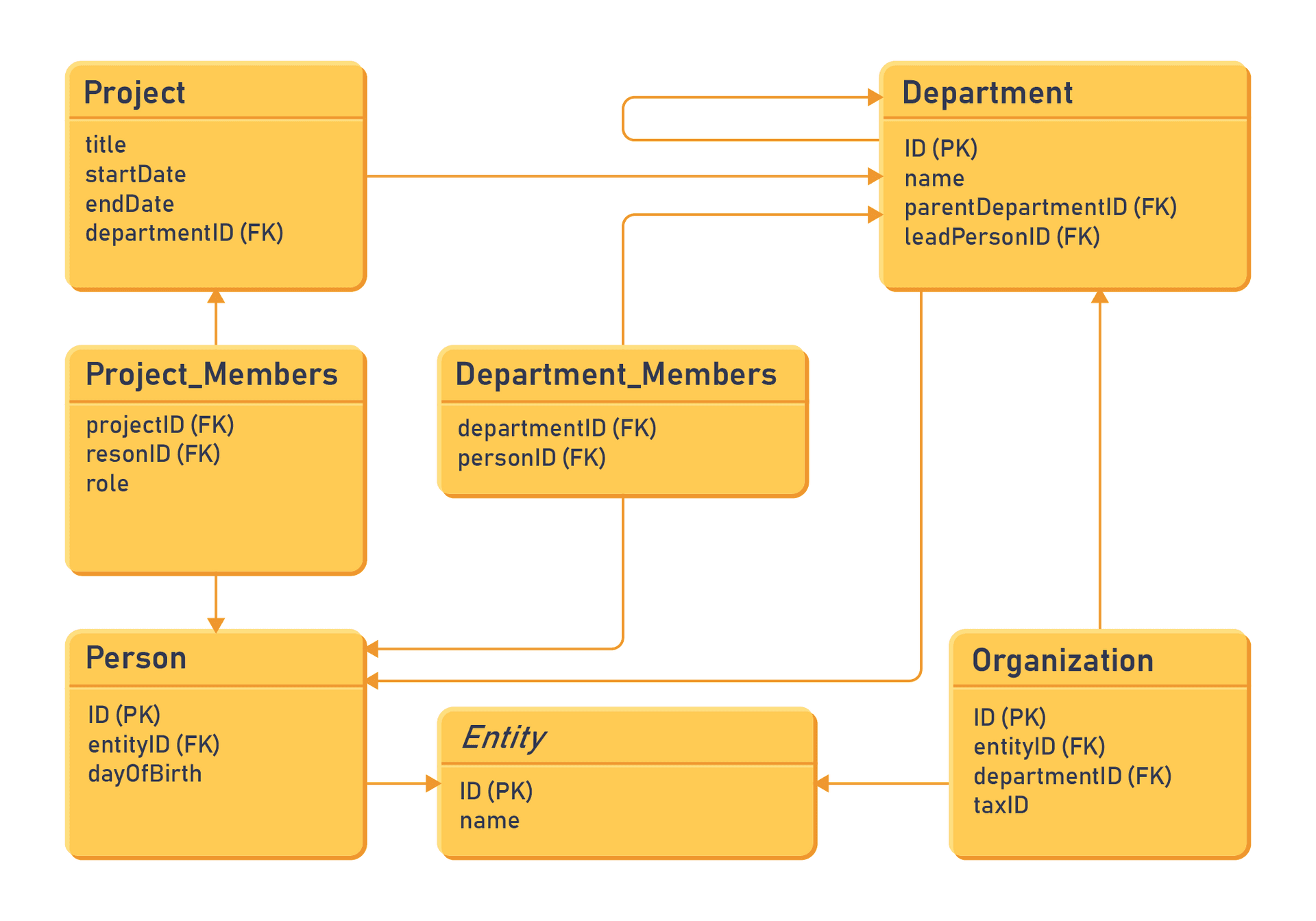 The team represents the heart of the project. It mainly consists of stakeholders such as IT project pilot, analyst, IT architect, developer, security specialist, system administrator, database administrator, application integrator.

The application user, on the other hand, is part of a team of software operators, and the success of a reengineering project depends to a large extent on their agreement with the application transformation they are trying to achieve.

Software statements, but outside the structure in which the RL will be executed

They provide good objectivity regarding the selected changes.

Reverse Engineering is a method of disassembling an object that helps to understand how a previously created device, process, system, or piece of software is constructed. An engineer takes a product apart to understand how it works and then recreates a similar or identical solution. The developer answers the question: “What processes provoke this behavior of the product?”.

In this way, it won't be possible to obtain the exact source code, but engineers will be able to understand the general logic of work and repeat the functionality. 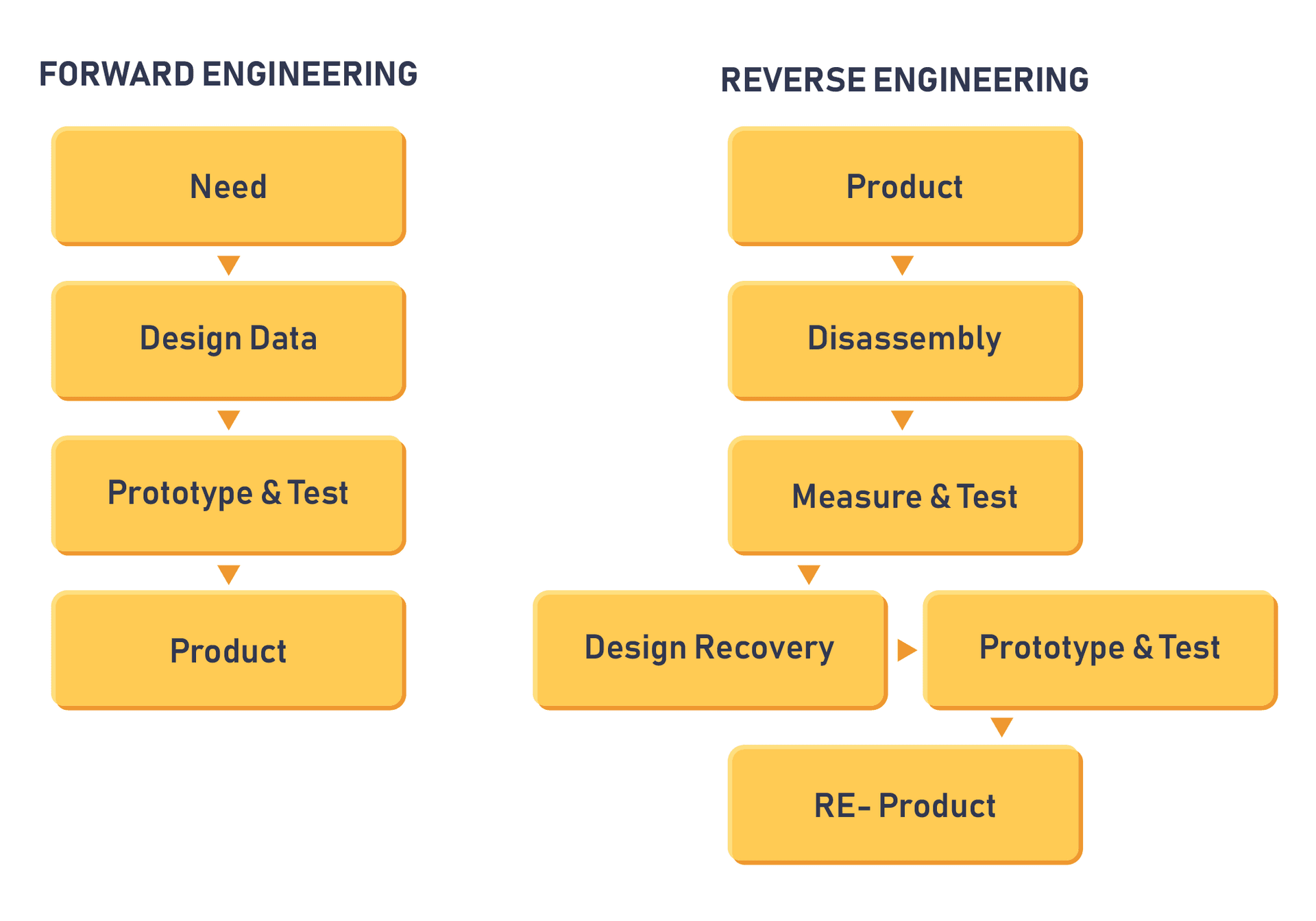 Companies often reverse engineer old, discontinued electronic components. If a piece of computer hardware has features lost due to changes in technology, reverse engineering allows manufacturers to discover and update those formulas. The method also helps to develop components that connect new and old, in order to connect obsolete equipment to new.

In IT, reverse engineering is used to study software and hardware, their elements, and principles of operation.

What is reverse engineering used for?

Reverse engineering is also used for illegal purposes - stealing code, bypassing technical copyright protection, and endless use of free versions of the application.

Software restructuring changes source code and/or data to make it amenable to future changes. Restructuring doesn't modify the overall program architecture. It focuses on the design details of individual modules and on local data structures. If the restructuring effort is beyond module boundaries and surrounds the software architecture, it becomes forward engineering.

There are a number of benefits:

If the basic architecture of an app is solid, even though technical components need work, software restructuring occurs. It is possible when major parts of the software are serviceable and only a subset of modules and data needs modification.

Code restructuring is used for a design that produces the same function but with higher quality than the original program.

A resource exchange diagram maps each program module and the resources that are exchanged between it and other modules. By building representations of resource flow, the program architecture can be restructured.

Before the start of data restructuring, the analysis of the source code must be included. A programming language statement that contains data definition, file description, I/O, and interface description is evaluated. The purpose is to extract data items and objects, and get information on data flow, to understand the data structures that have been implemented.

Forward Engineering (Renovation and Reclamation) is an approach to building an app with the help of the given requirements.

It requires high proficiency skills. Forward Engineering takes more time to create an application. It is a technique of creating high-level models or designs to build complexity and low-level information. The software engineering process which includes SDLC to recreate the associated existing applications is a forward.

Re-engineering is an important part of software evolution

Do you have a system that is already built but needs improvement? The previous developer abandoned the project, "locking" your investment in unfinished software. We can help!

We have seen many cases where a client already had a solution or piece of code but needed to update or continue working on the program. The most typical situations:

The software works great, but new features are needed and the previous command is not available.

The software is functional, but the number of users has grown, or the database has become larger. The speed of work has become unacceptably low.

The software mostly works, but there are bugs that the previous command cannot fix.

The software is built on an old version of CMS. The user wants to take advantage of new features, but custom modules are written in such a way that they cannot be easily updated.

The software is partially functional. The team that started the work cannot continue or the client decides to replace the developers.

The software works, but users complain about the complicated interface, spend too much time doing trivial things, or can't find the functionality they need.

The software is a self-made prototype and there was a need to develop a professional version.

In most cases, it is convenient for us to work with someone else's code, as we understand the limitations and needs of our clients. But there are certain risks that must be taken by all parties, as well as a number of mandatory steps.

Where can I find people to work on Software Reengineering projects?

In Agilie we can help you with re-engineering projects. But the main obstacle is that we can't make any judgments before we explore the existing solution and analyze the code. Even after that, there is still the risk of the appearance of previously unnoticed solutions by previous developers. This is also part of our work and the risk that exists.

The rest of the process is similar to standard software development methods. We are working on what needs to be done and comparing it to the current or expected version. Then we create a backlog of the necessary features and implement them in accordance with the customer's priorities.

In many cases, we will use an existing solution as a prototype. In this case, we reproduce the capabilities of the system, looking at how they should work.

Sometimes we will be able to build a system on top of an existing solution and use the existing code. Sometimes it is necessary to do code refactoring to make the system easier to maintain. In the most complex cases, the software is developed from scratch.

Kvitoslava M.
Share
Get in touch
Send us your comments, suggestions, questions, or feedback.
Next posts
What is IT Support? Types, Functions and Tools
Kvitoslava M.
Why You Need to Start Your Project with the Discovery Phase
Helen Vakhnenko
App Maintenance: Why and How Often You Should Update Your App
Helen Vakhnenko
Services
Expertise
Technologies
Insights
Success Stories
Company
Careers
Blog
Contact