Manual vs Automation Testing: Do You Need Both?

When you release a digital product to the market, you must be 100% sure it's going to work smoothly and flawlessly. And, of course, it should meet the expectations of your users too! Otherwise, your project may fail, which isn't the desired outcome, right? So you need to pay due attention to software QA testing.

But what is the right approach to testing your platform? Which techniques to select? Is it worth checking product performance manually or using automation? Or maybe choose both options at once?

These are tricky questions, but don't worry: we're ready to answer them in proper order.

What is automated and manual testing?

Ensuring high-quality software is a complex process, which takes a lot of time and costs some money. However, such expenses cannot be avoided (provided you want to succeed in the long run). It is important to draw up a competent testing strategy that would allow you to get the maximum effect with minimal effort and understand whether the site or application meets the requirements set.

And first of all, you should answer the question: are you going to test software manually or using process automation?

How do the automated and manual testing differ?

Both types of testing have pros and cons, which we're going to discuss on a case-by-case basis. For now, let's just say that the successful implementation of the project largely depends on the time, cost, and quality of work. The challenge for the business owner is to reduce the cost and development time while maintaining its quality. And testing also plays a role in this regard.

As you must have figured out, this type of testing doesn't involve the use of automation tools. The testing engineer interacts with the digital product directly and works with it as the end-user.

Although manual testing is quite low-level, it cannot be neglected. The fact is that total automation is just impossible… however, let's discuss the problem in more detail.

The main task of manual testing

A key goal is to make sure the software works as intended. And believe us, it's not about mindlessly clicking on website links and tapping app screen elements. You should draw up a competent strategy and act according to the plan.

So while a manual QA expert isn’t required to have specific knowledge, he must be smart and discerning.

Layout testing is extremely important, don't you agree? Then we propose to discuss what tools are best to use to achieve the best result.

Pros and cons of manual testing

Let's start with the benefits, do you mind?

Where should you use manual testing scenarios?

We constantly strive to automate and thereby simplify some actions and operations, and the work of a QA expert is no exception. Moreover, manual scripts are hardly enough to create a project’s testing strategy capable of ensuring the smooth operation of modern multi-component software systems.

Still further, less and less time is devoted to the development of digital products, which means testing must be carried out quickly and efficiently. And its automation is a great answer to this kind of challenge of our time.

What is Automation Testing?

Automation of the QA engineer's actions involves the use of special software (in addition to the tested one) and writing various tests. The entire process relies on a pre-scripted scenario, so there is no room for spontaneity... but it has other benefits that we have yet to discuss.

Why is automated testing so demanded?

If you still don’t understand who and why needs testing, you should carefully read our article at the link.

To write automated tests, a QA specialist must have programming skills. The work is rather interesting because the expert has to come up with effective and original ways to use automated testing tools.

Pros and cons of automated testing

Now it’s time to discuss the main advantages and disadvantages of automated testing.

Where should you use automated testing tools?

We'd like to add that the most successful and promising option is to combine manual and automated testing approaches. 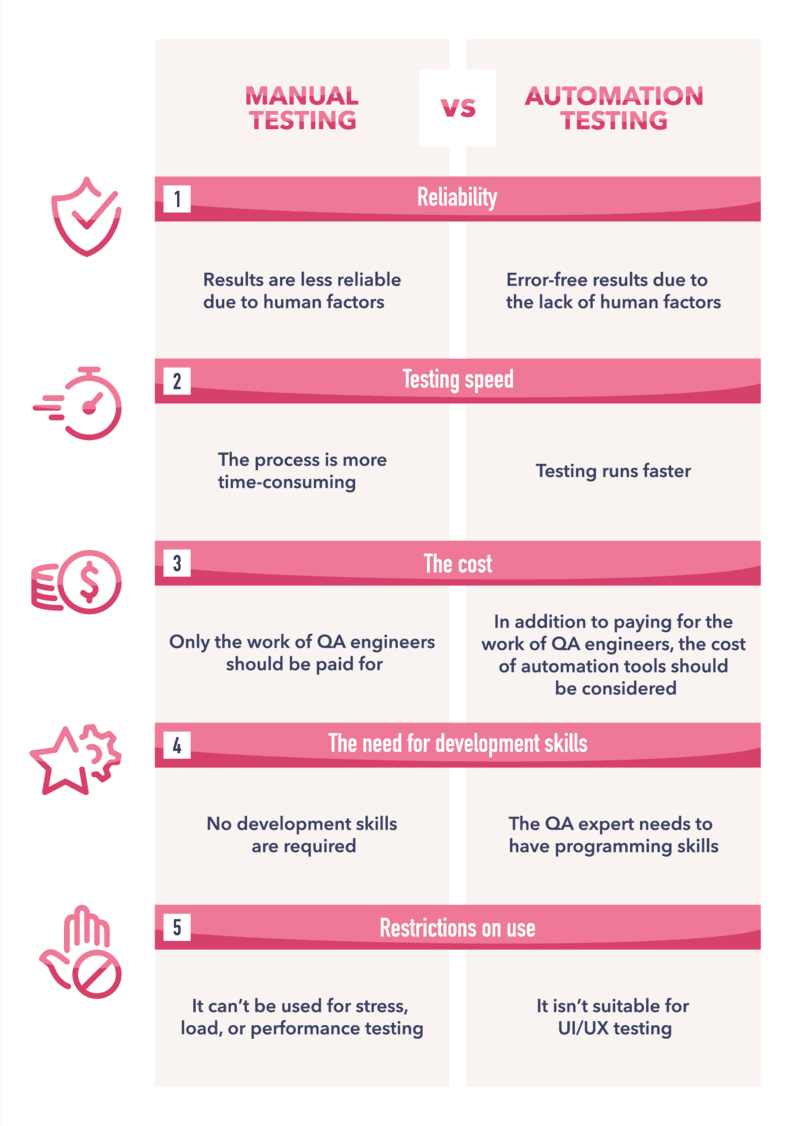 To select the right testing techniques, you need to analyze your project according to the following parameters:

Based on these factors, you have a chance to create a project’s testing strategy, which works perfectly for your project.

We always pay great attention to testing and draw up an action plan with the specifics of a particular project in mind.
Helen Vakhnenko
Share
Get in touch
Send us your comments, suggestions, questions, or feedback.
Next posts
The Library for Efficient Work with the Test Field
Helen Vakhnenko
Effective Layout Testing Tools
Helen Vakhnenko
Perfection Knows No Bounds, or Who Needs Testing?
Kate Sandulova
Services
Expertise
Technologies
Insights
Success Stories
Company
Careers
Blog
Contact