Let's Discuss a Push Notifications Mechanism for iOS and Android

You've probably heard about push notifications and dealt with them yourself more than once, right? But did you know they can serve as an excellent marketing tool to increase the profitability of your mobile app? Yes, don't be surprised, that's the way they work!

Believe it or not, notifications are a cool channel of instant communication with your users, which allows you to engage them in active interaction with your platform. To be precise, each of your users will be aware of your latest news, special promotions, application updates, and more. Plus, you'll be able to remind the consumer that he or she hasn't opened your app for a long time.

Interesting, isn't it? Then we suggest reading our new article. We're going to explain to you the operating principle of notifications, describe their advantages, share a few approaches to convincing a user to subscribe to your push messages, and the like.

A push notification is a short message displayed by an application on a server command. The greatest thing is that the user may not even be working with the mobile program at this exact moment! You’ll have an opportunity to reach him or her whenever you want.

Why is push technology so good?

What Does a Typical Push Notification Consist Of?

Initially, push technology was invented at the very beginning of the 21st century (to be specific, in 2003). The idea came from Research in Motion, which was looking for a real-time email solution so that Blackberry device users could receive emails without delay, on the go.

As to iOS and Android mobile platforms, the first example of a push notification was proposed by Apple in the summer of 2009 (iOS 3.0). Google also kept up with the competitor and created GCM and FCM (as opposed to Apple's APNS). And in 2014, web push messages appeared.

When implementing pushes, you need to understand their essence; you have to know what you'll have to face and deal with.

Let's get this sorted out.

The simplest use of push notifications is to tell the client about what is happening in your application (and the story should be interesting to him).

For example, an mCommerce app can inform on upcoming sales, promotions, etc;

Zero invites the user to win a prize: he just needs to return to the app and follow a series of simple actions.

Among others, you can (and should) inform the user about events related to him and his life. Here are a couple of relevant ideas of the sort:

Here we’re dealing with business-type notifications, which inform the user about the order status (or something similar):

What is the Difference Between Push Notifications on iOS and Android?

All notifications are the same in their architecture and principle of operation, but there are still some differences. Let's list them briefly.

If you want to get a complete guide on in-app notifications and messages, follow the link and read our article.

We offer web and mobile development services. Click here to find out what we’re proud of.

Okay, that's all very well, but how do push notifications work?

We'd like to start by describing the general principle of operation of push notifications on iOS and Android:

Sometimes an intermediate service is additionally used to check the relevance of the token (since the application can be reinstalled or uninstalled).

Why is the relevance check important?

Let's say a user has uninstalled an app from one of his devices. It is logical to assume that the push notification provider will transmit information that notifications should no longer be sent to this very device. Right?

However, GCM (Android push notification server) will send the required token immediately, and APNS (Apple's service) will resort to a separate feedback server, on which the list of tokens is being accumulated and sending once a day. So the intermediate service will come in handy in such a case.

APNS stands for Apple Push Notification Service and is the cloud platform of the iOS system. It allows sending iOS push notifications.

iOS push notification mechanisms are extremely simple and echo what we described above. The infographic below illustrates the whole process very clearly: 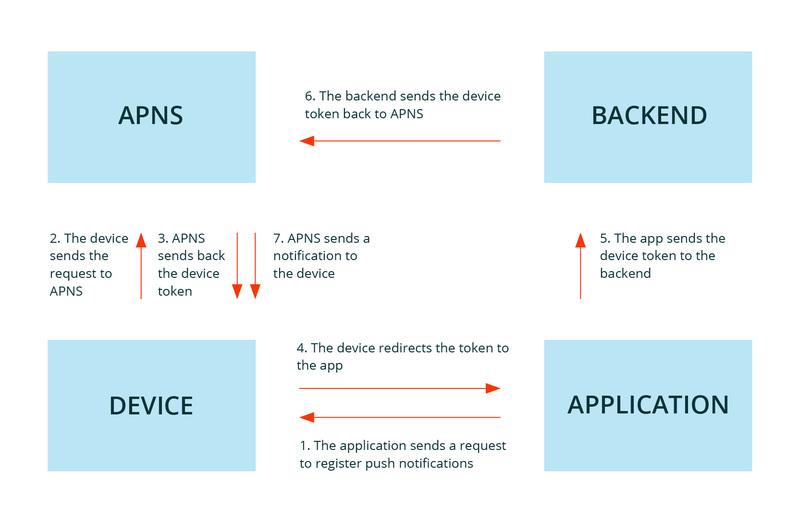 If we talk about the push notification solution from Android, then there are several options:

As we’ve already said, Android notifications will be displayed on the user's smartphone the way the developer wants. That is, push notifications features (and their method of displaying) depend on who creates the application.

If your application runs on just one platform, then everything is relatively simple... but what if your mobile service supports both iOS and Android devices? Do you really have to configure notifications for each OS separately? Is there no way to make such a tedious process easier?

Let us put your mind at rest: the above-mentioned Firebase Cloud Messaging from Google can help organize sending notifications to all types of devices: Android and iOS ones; moreover, it also works with web notifications! The only exception is the Huawei platform (in this case, you have to deal with the Huawei Push Kit). 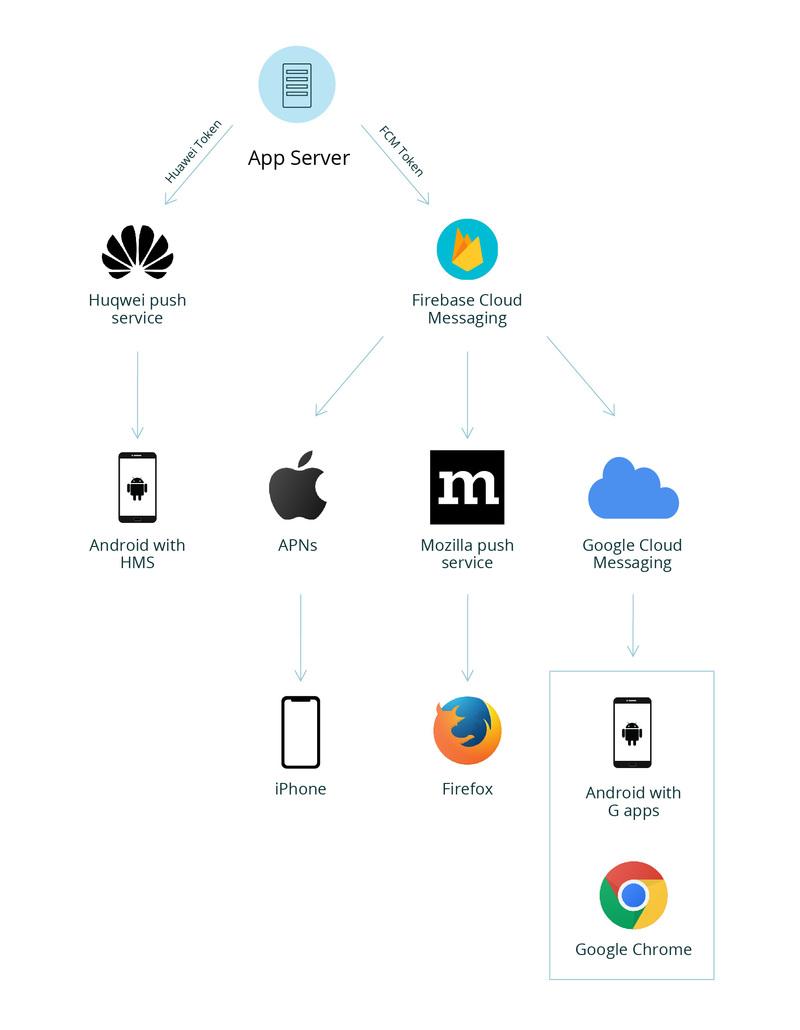 The Main Mistakes When Implementing Pushes

How to get a user to subscribe to your notifications? There are 2 main ways to achieve the goal: 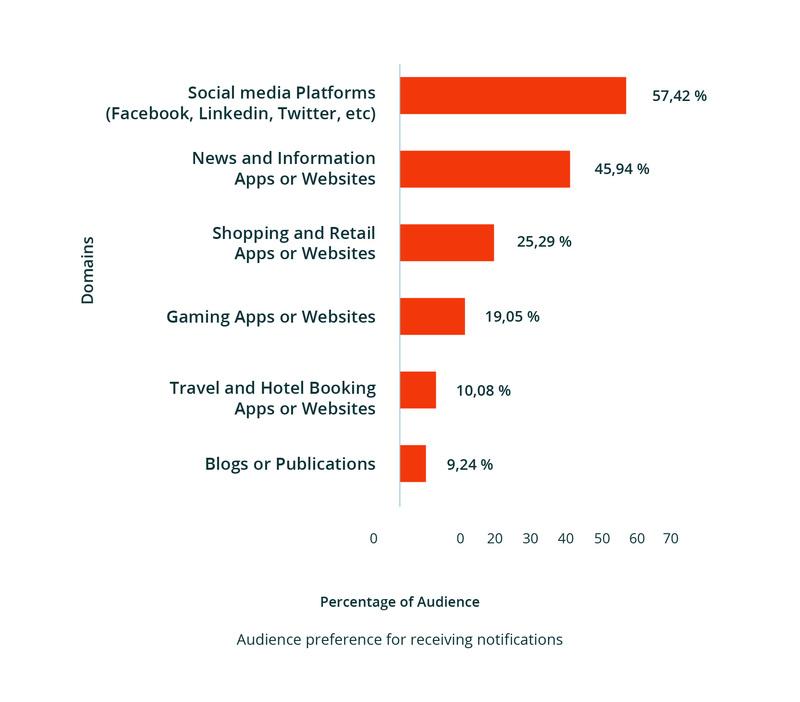 By the by, there is one little trick to help you win a greater number of notification subscribers... even against their will. Let's discuss?

How to play hanky-panky with a user?

A good way to cheat a little is to prompt the user 2 options: he can either agree to receive notifications right now or postpone the decision until later. So if the user refuses to be your subscriber today, you’ll get another attempt to convince him after a while.

How to Plan a Push Notification Strategy?

We've discussed the push notifications functions and mistakes you should avoid making. Now it's time to describe the basic strategy itself.

The first stage is collecting a database of people who have agreed to receive your notifications. We've already explained how you can get their consent to subscribe.

You now have users who have subscribed to your push messages. But what should they be informed on? How often do you need to provide them with relevant data? All this is worth thinking about at the second stage of your strategy formation:

Of course, it's also important to check how effective your strategy has been. What if it needs improvement?

How to evaluate the results of the notification strategy?

We suggest focusing on the main indicators of efficiency:

By the way, some people prefer to evaluate negative results and analyze the number of users who have unsubscribed or even deleted the application after a certain notification. In the end, this is a clear hint that your strategy has completely failed!

How to Avoid Unsubscribing From Notifications?

To understand how to avoid the sad outcome of unsubscribing users from your push messages, you should analyze the statistics data. There is no need to do the analysis yourself, there are companies, which have already done this. For instance, VWO Engage conducted a survey and found that most users opt out of notifications when receiving too many of them (more than 60% of unsubscribed users) or if they're not interested in the information provided (about 55% of unsubscriptions).

To get all the data, take a look at the infographics below. 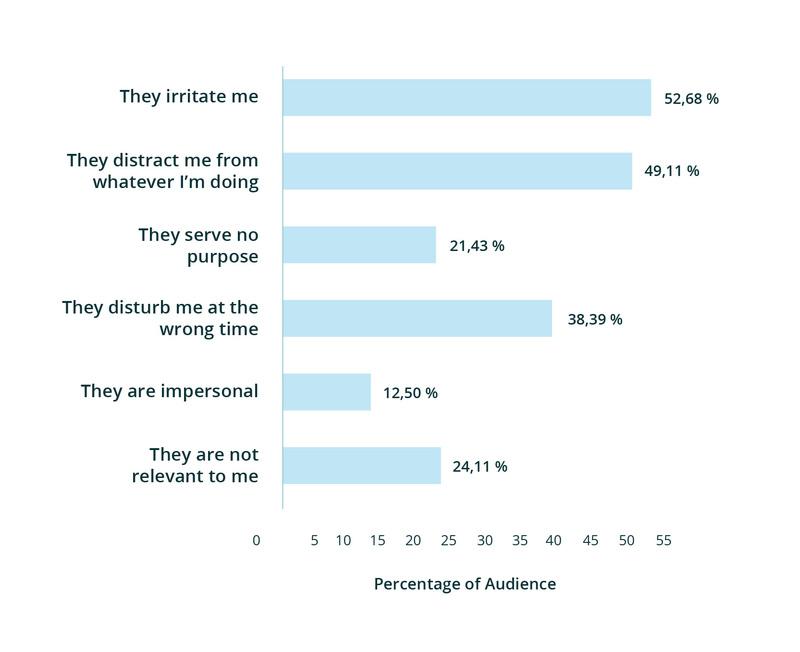 Almost 10% of people turn off notifications if they get the same information every week. So use the advantages of push messages wisely.

Are you ready to surprise us with your project idea? Do your best! Our mobile and web experts look forward to meeting your challenge.
Helen Vakhnenko
Share
Get in touch
Send us your comments, suggestions, questions, or feedback.
Next posts
How to Talk With Your Users: In-App Notifications and Messages
Helen Vakhnenko
Virtual Assistant Apps: Benefits and Abilities
Helen Vakhnenko
How to Create My Own Digital Assistant like Siri
Helen Vakhnenko
Services
Expertise
Technologies
Insights
Success Stories
Company
Careers
Blog
Contact