Do you enjoy cooking? If not, are there any culinary fans among your friends? Anyway, you probably know that searching for the right recipe on the Internet may take a lot of time. And after finding the desired, you're faced with another problem, namely: what is the proper way to save it? Rewriting the recipe on paper is too old-fashioned, and bookmarking it is unreliable.

The best solution is all types of recipe apps, as they’re incredibly helpful in cooking. They have a lot of great features and therefore are in high demand among users. So it makes sense to consider starting your own project of the sort, what do you think?

Sounds tempting? Then it's time to read our article to learn how to make a recipe app. We share our expertise and experience and provide plenty of useful tips.

What is a recipe app?

These are mobile applications that make cooking easier, faster, and more convenient. In fact, such an app is a faithful assistant in the kitchen, a kind of digital scullion. It’s a mini-cook willing to help you with advice and give you the opportunity to consult with other users; and you can share your culinary experience with them too.

Of course, the apps in question differ in their functionality in one way or another, but they have one thing in common: they offer you useful cooking content and help you improve your culinary skills.

But do you know what's the coolest thing about these applications? The fact that they cover a wide variety of audiences. In the end, men and women, teenagers and old people, families and singles love to cook. And they can all become your users if you decide to introduce your own solution into the recipe app market. Great, isn't it?

How do recipe sharing apps work?

The process of using the application seems to be elementarily prime, right?

To begin with, there is an increasing demand for these kinds of applications today, which is confirmed by statistics. As the latest research claims, the cooking & recipe app market has reached more than $ 2.15 million and has already attracted at least 21 million users. And it's quite a promising start!

Moreover, you still have a chance to join the leaders, so why not become one? You just need to figure out how to make a recipe app and be willing to take risks.

Why are culinary applications so popular?

The above section should have let you know that the cost to create a recipe app could be high, but it’d pay off with the right approach to the development process.

Let's discuss the issue from A to Z.

Of course, we’ve described only a small fraction of the problems that a developer will have to face in the cooking recipe app development process; you just see an example of the main possible challenges.

What does the choice of a technology stack affect?

Developing a recipe application is a complex, lengthy, and, accordingly, expensive process, to put it mildly. However, there are different ways to simplify it, and one of them is using APIs.

API (application programming interface) is a set of certain procedures, functions, and constants for interaction between a site or application and third-party servers. The developer can take advantage of the API to gain access to the functionality of a third-party program (say, to implement a payment system).

Follow the link to learn the 55 coolest financial APIs to start your digital project of any type.

How can APIs help us when it comes to cooking app development?

And that’s just a shortlist of what APIs are capable of. Surely, some of them are paid, which might increase your costs to make your own recipe app, but sometimes it's worth it. Especially as you can also find free solutions.

When building a recipe application, be sure to develop two versions of the program, each with its own set of features.

The second block of features is aimed at the administrator of your application. The admin's task is to manage the system: payments, users, content, and more.

The on-demand model is very popular right now, and Postmates and Zomato are striking examples to prove it. Wanna know more?

Actually, the above functionality is just enough to attract users. Though, if you aren't afraid of increasing costs to make your own recipe app, add a few more cool features, thereby you'll make your service even more engaging and inviting.

5 Additional Features for Your app 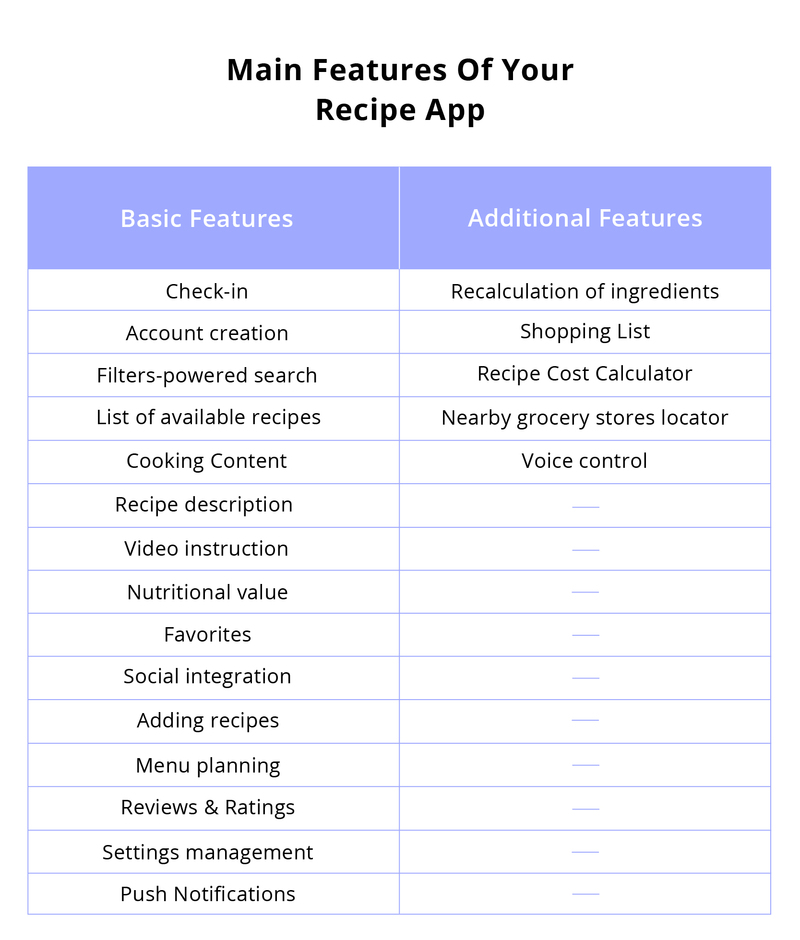 How much does it cost to develop an eCommerce website? We know the answer! Click here to find it out too.

Cost for Developing a Recipe app

Before giving you an idea of the estimated development budget, we'd like to explain to you what affects the cost to create a recipe app:

It’s finally time to move on to the question of the development budget itself. The graph below illustrates how your potential costs depend on the level of the application complexity. 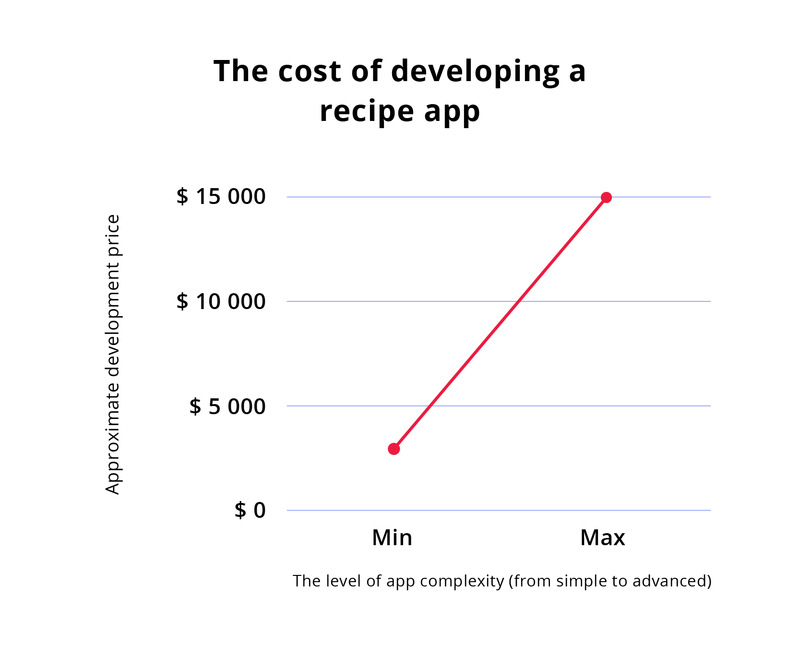 The Best Way to Monetize Your Recipe App

Interested in a cooking recipe app development project? Then let's get down to the details!
Helen Vakhnenko
Next Posts
Online Laundry Service: The Most Successful...
On-demand laundry mobile apps are really popular today....
Helen Vakhnenko
The Ultimate Guide to Create a Point-of-Sale System...
Looking for reliable POS software and hardware? Then...
Helen Vakhnenko
Best Strategies for Grocery Ordering App Owners amid...
With the coronavirus pandemic, shopping apps have become...
Helen Vakhnenko