What You Need to Know About Native and Cross-Platform Apps

In our blog, we occasionally compare cross-platform mobile development frameworks or devote articles to the native way to create apps.  But maybe someone doesn't know the basics of these issues? Say, what is a native application? What is its difference from a cross-platform app? We're ready to answer your possible questions and clarify the matter through and through.

Interested? Then keep reading! We're going to describe cross-platform and native app development technologies and discuss their pros and cons. And, of course, we'll explain to you what to select for your project (at least what to base your choice on).

Okay, what does native application mean?

The name itself is very eloquent and indicates the correct answer. The native approach means the one intended for a specific OS, Android or iOS (Apple). And a native mobile app, in turn, is a program written in a certain platform language: Java/Kotlin (Android) or Swift/Objective-C (iOS).

A native app developed for Android or iOS has a lot of advantages, among others, it appreciably simplifies the interaction between a UI/UX specialist and a programmer:

As a result, the user opens the native mobile application and intuitively interacts with its interface.

Impressive? Sure! But before you rush to create native apps, let's take a look at their pros and cons (since there are flaws in them too). 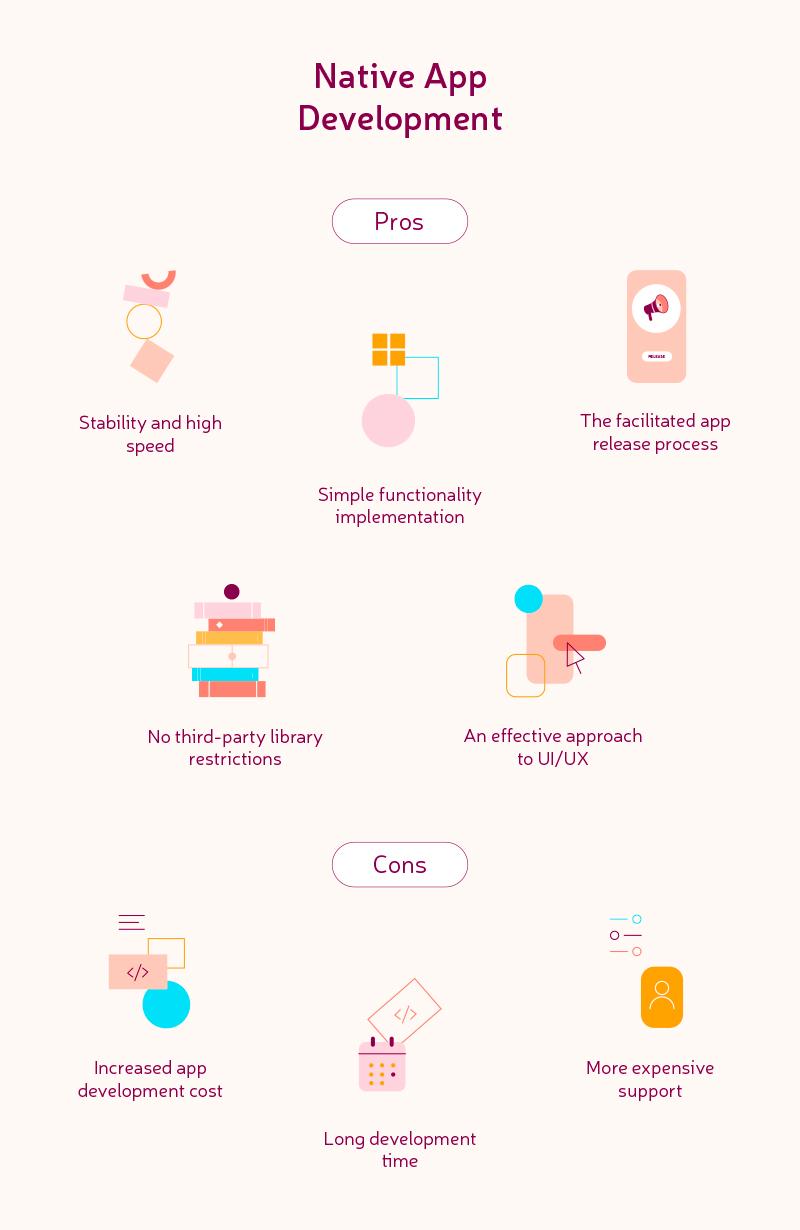 Now you know the answer to one of your questions (what is native mobile app development?). And it's time to talk about the pros and cons of a cross-platform way to create apps.

The main idea of ​​cross-platform solutions is to optimize the processes of building a mobile application (so it's not about the user as such and his convenience). The cross-platform approach provides the ability to compile source code for execution on multiple mobile platforms. Though, the result of each compilation is a separate executable file: with the .ipa (iOS) or .apk extension (Android).

And if you've compiled an executable file with the .apk extension, it doesn't mean you're free to run it on iPhone. You'll have to do some work with the code anyway; however, don't worry: just a few changes might be required.

Many people think that hybrid applications are the same as cross-platform ones. And in some ways they're right, the concepts are similar... though, not totally. That's why we'd like to brighten the issue.

Cross-platform app development is the process of one-time formation of the codebase which can then be used for various OSs. And the logic for creating hybrid applications is similar.

However, hybrid programs are always based on web technologies (such as Javascript or HTML5), while cross-platform apps sometimes take advantage of other solutions either. A prime example is the .NET - oriented Xamarin framework.

But let's get back to discussing cross-platform mobile app development tools. What is represented by today's market?

Of course, the list of available frameworks is much larger, we just gave an example of possible solutions.

Now we offer to see what affects the choice of a specific cross-platform tool. So…

Now let's talk about the pros and cons of cross-platform app development. 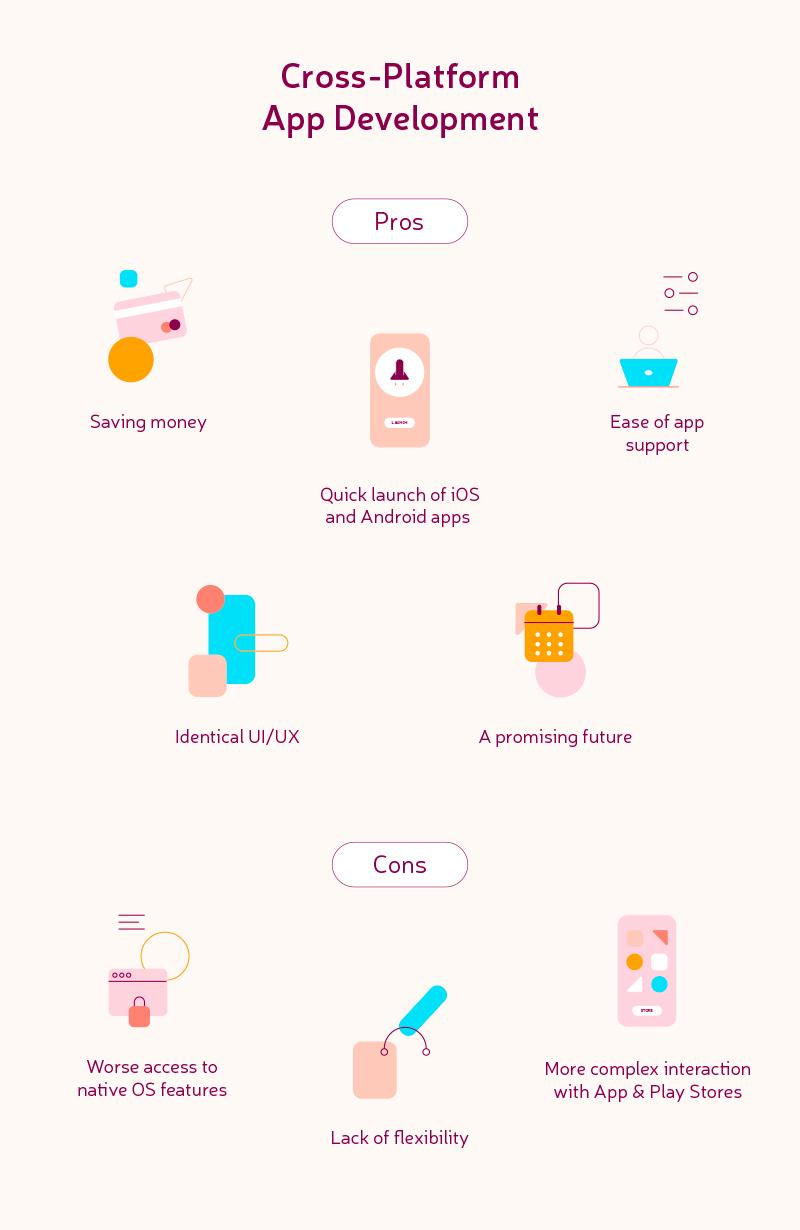 Native vs. Cross-platform app battle: what to choose? 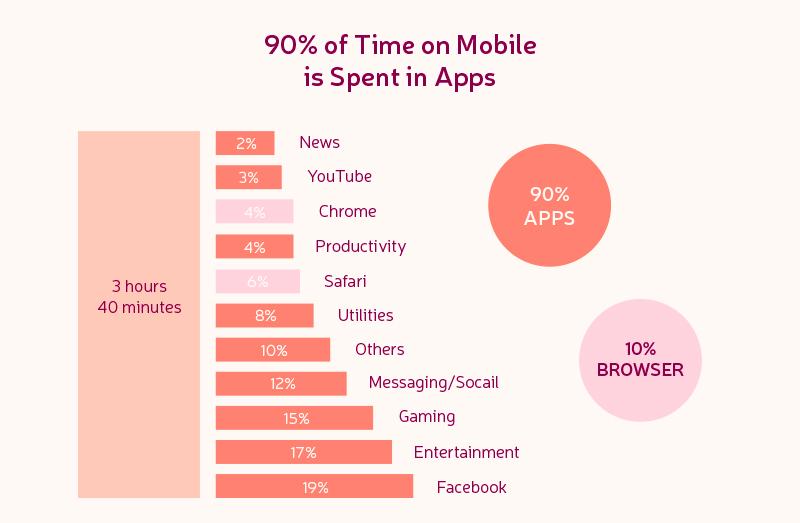 As the above infographic shows, people are actively using mobile applications, which means these programs should be as effective as possible. And the way they are created also affects the final result. But what to choose?

We suggest considering cross-platform and native app development technologies according to the following criteria.

Cross-platform applications should be supported by all platforms. And they are supported… but with the proviso: developers need to modify the code a little bit anyway.

User Experience is crucial to the success of any application. And this determines the importance of user-friendly design. Moreover, each development approach has its advantages (which we mentioned earlier in the article).

Native applications, if you remember, have an intuitive interface inherent in a particular platform. Therefore, the user has no difficulties when getting acquainted with the new program.

On the other hand, cross-platform mobile developers can create a single UI/UX style common to both iOS and Android apps (it’s important not to go too far, though, and maintain a more or less standard look of key controls, otherwise, you might confuse your users).

However, good developers will find the optimal solution to each problem:

When building native apps, it's easier to set the interaction of the program with a specific OS (as you know, if you carefully read our article). So, getting access to all the services of the device is quite easy. But if you're dealing with cross-platform app development, you have to consider the features of the chosen framework (which might impose certain restrictions).

Cross-platform and hybrid applications allow you to reach a wider audience than native programs since they're targeted at several platforms at once (and you'll be able to establish contact simultaneously with iOS and Android users). As a result, you get a chance to increase your user base in the shortest possible time. And let's admit, sometimes such an opportunity becomes a decisive factor (especially when it comes to small businesses).

We've already discussed cross-platform and native app development costs and compared the expenses of supporting the final product, but we want to repeat it again to complete the picture.

Native development requires at least two specialists (Android and iOS experts). And this is at best! Of course, cross-platform technologies are much more affordable.

And if we talk about your program's support, then it's the same story. Native applications are complex and therefore expensive to maintain, unlike their cross-platform counterparts.

As you understand, there are many cross-platform frameworks, each with its own pros and cons. We offer to compare two of them... so: NativeScript vs React-Native!

Now let’s summarize everything that was analyzed above. So…

And, in general, if you have a good budget and need extra complicated app functionality - create native apps, why not?

Some companies specialize in building native apps. Others tell their clients to develop a cross-platform app ("Why pay more for the same quality?", so to say).

We aren’t so categorical. We know that each application is unique and needs a special approach. That’s why we take into account all the features of a particular project and give advice based on these premises.

Our company employs highly qualified developers who will analyze your case and recommend to you what is best to choose: iOS and/or Android native development or a cross-platform approach. Contact us without delay!