People are increasingly joining the ranks of happy cryptocurrency users (surely, Bitcoin is still the top option). Though it isn’t enough to buy bitcoins, you need to find where and how you're going to store them. So you can't do without a special crypto wallet, regardless of whether you plan to invest in Bitcoin or spend your funds right away.

The task is more difficult than it seems at first glance. One wrong step will result in all your crypto money being lost! That would be awful, wouldn't it?

So we decided to help you a little with our expertise. We've compiled a list of the best Bitcoin wallets and detailed the pros and cons of each solution. You now have a lot to choose from.

By the way, if you yourself are planning to create a cryptocurrency wallet app, don't ignore our article too, take some time to read it. The examples we're sharing with you will inspire you even more.

What Is a Bitcoin Wallet?

The answer to the above question is extremely simple: the wallet in discussion is a special space intended for storing (and sometimes managing) digital crypto savings.

There are different wallet types, but they basically consist of two critical elements:

As you understand, the public key doesn’t need to be hidden, after all, it’s just the address to send the cryptocurrency. The situation is more complicated with the private key: if third parties know it, your savings will be in danger.

A few more things to remember:

Cold or Hot Wallets: What is Better?

These two main types of crypto wallets can be divided into narrower subcategories.

We write more about the wallet types in our other article. Follow the link and read it right now.

What to Consider When Choosing a Wallet?

To pick the best crypto wallet app (or create it yourself), you need to answer a number of questions:

Have you answered these questions? Then it’s time to skip to the next, key section of our article. 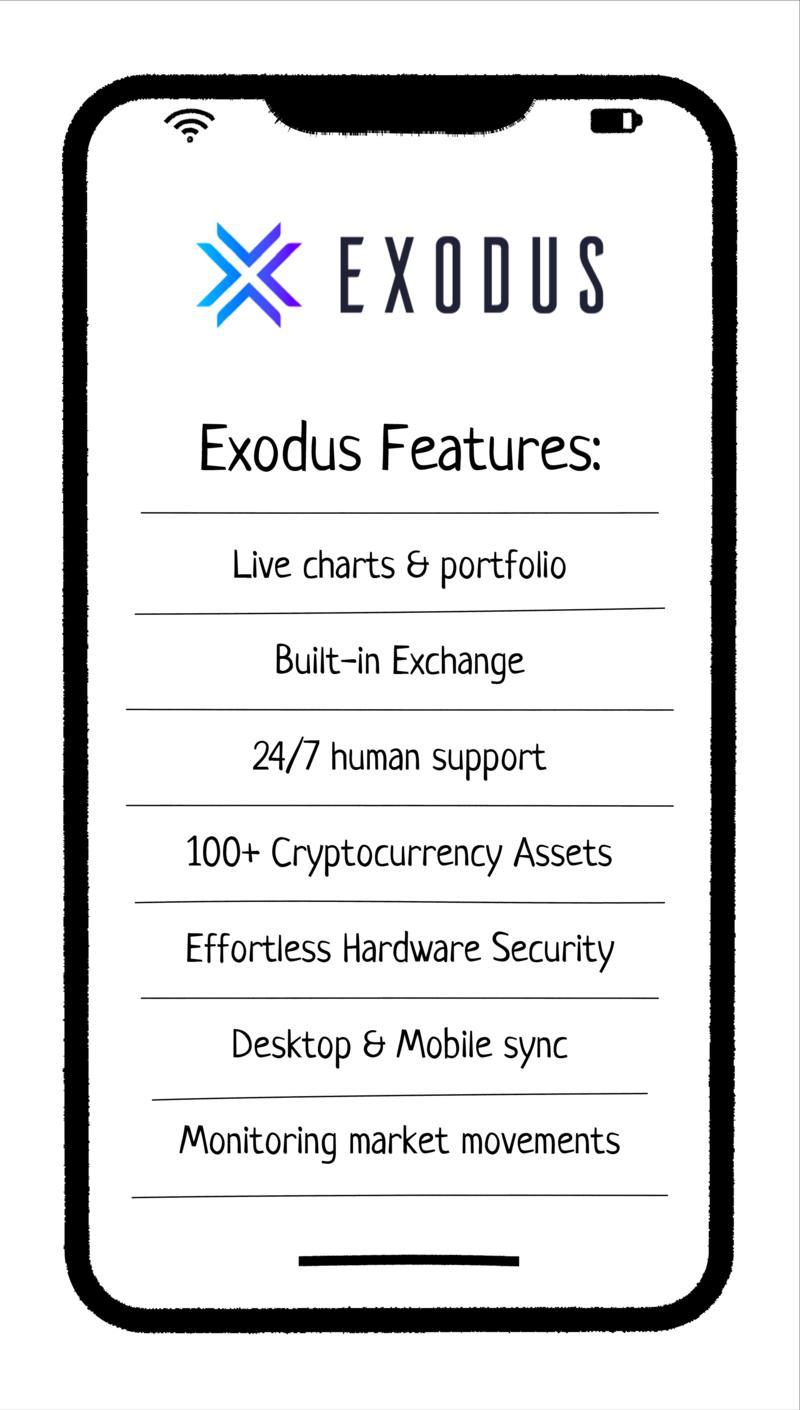 Exodus is a top-notch, multi-cryptocurrency, highly personalized wallet. It is considered one of the most user-friendly solutions on the market today.

It doesn't belong to online crypto wallet types and is a software (desktop) product (which is, as you should remember, a program installed on your computer or another similar device)

Exodus doesn’t have a long history so far, it was created just a few years ago, in 2016. The money for its development was received thanks to a successful crowdfunding campaign.

By the time Exodus appeared on the market, the latter had already been full of similar apps (too many of them, frankly speaking). To succeed, one had to offer users something special, and the creators of the new product did it (take a tip from that if you want to invest in Bitcoin applications either, by the way!). They built a cryptocurrency wallet app with maximum personalization and usability in mind. In other words, the focus was on a flawless user experience.

The goal was set and achieved, which's why Exodus managed to find and gain the loyalty of a large number of users in a short time.

What about data security?

Alas, Exodus isn't the safest bitcoin wallet (although it is quite secure), which is easy to explain:

However, don’t think Exodus is risky to use. It's just that the service will always be inferior in safety to cold wallets, that's all.

Since Exodus is so easy-to-use, clear, and intuitive, it'll be the perfect choice for those new to the crypto world. They’ll have a real chance to adapt to it quite easily. 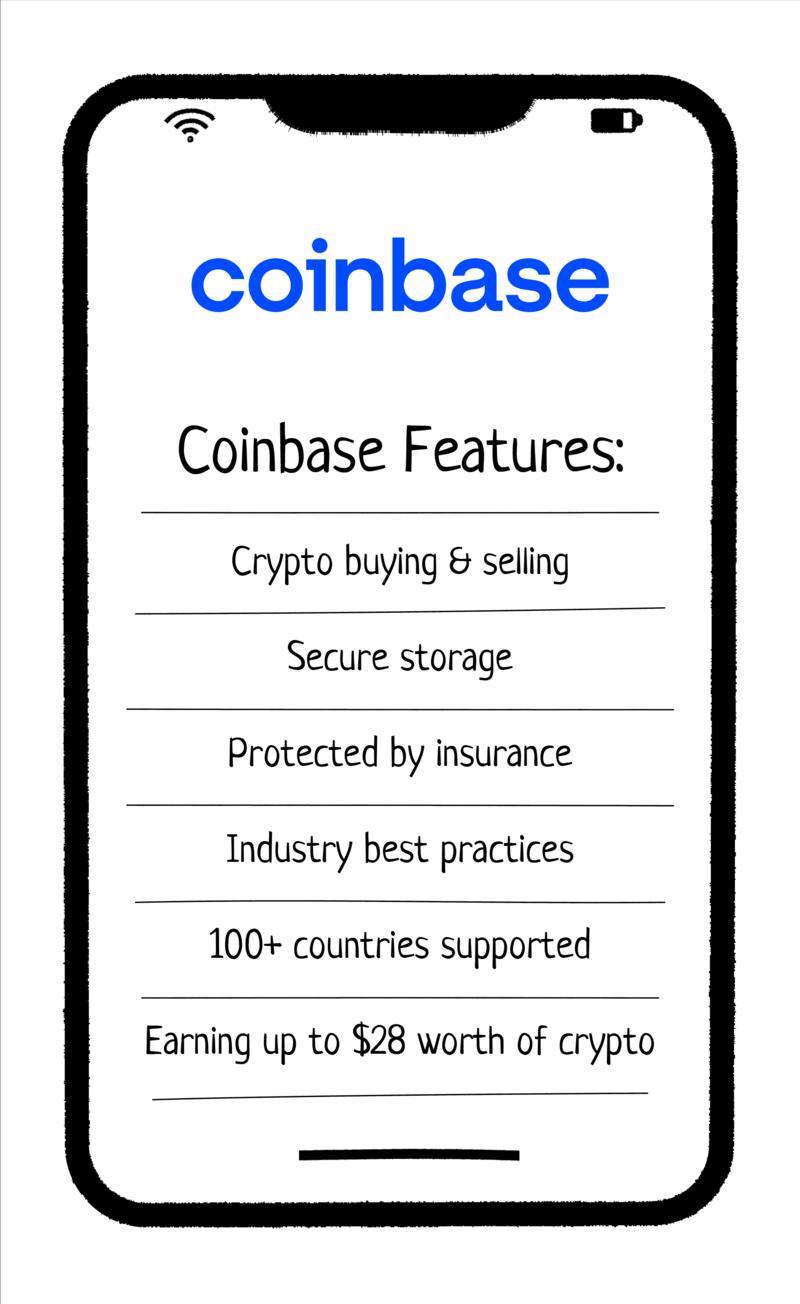 The second item in the list of the best Bitcoin wallets (not only Bitcoin, of course) should be taken by Coinbase. The service today exists in two formats:

Alas, the crypto exchange is unavailable in some countries - say, those that belong to the post-Soviet region, - however, as an online or mobile wallet, Coinbase can be used anywhere in the world. And this is the most important thing, isn't it?

By the by, some users consider Coinbase the best mobile crypto wallet, which says a lot, right?

Coinbase was released into the cryptocurrency market when it was just starting to evolve. More precisely, the service appeared in 2012 in San Francisco (California).

The original goal was to provide a product able to compete with the Blockchain wallet (which was the best wallet for cryptocurrency at the time).

But over time, the company has expanded its line of digital solutions. And today the crypto wallet is no longer the only product, there are also a cryptocurrency exchange, a venture fund, and other similar services. 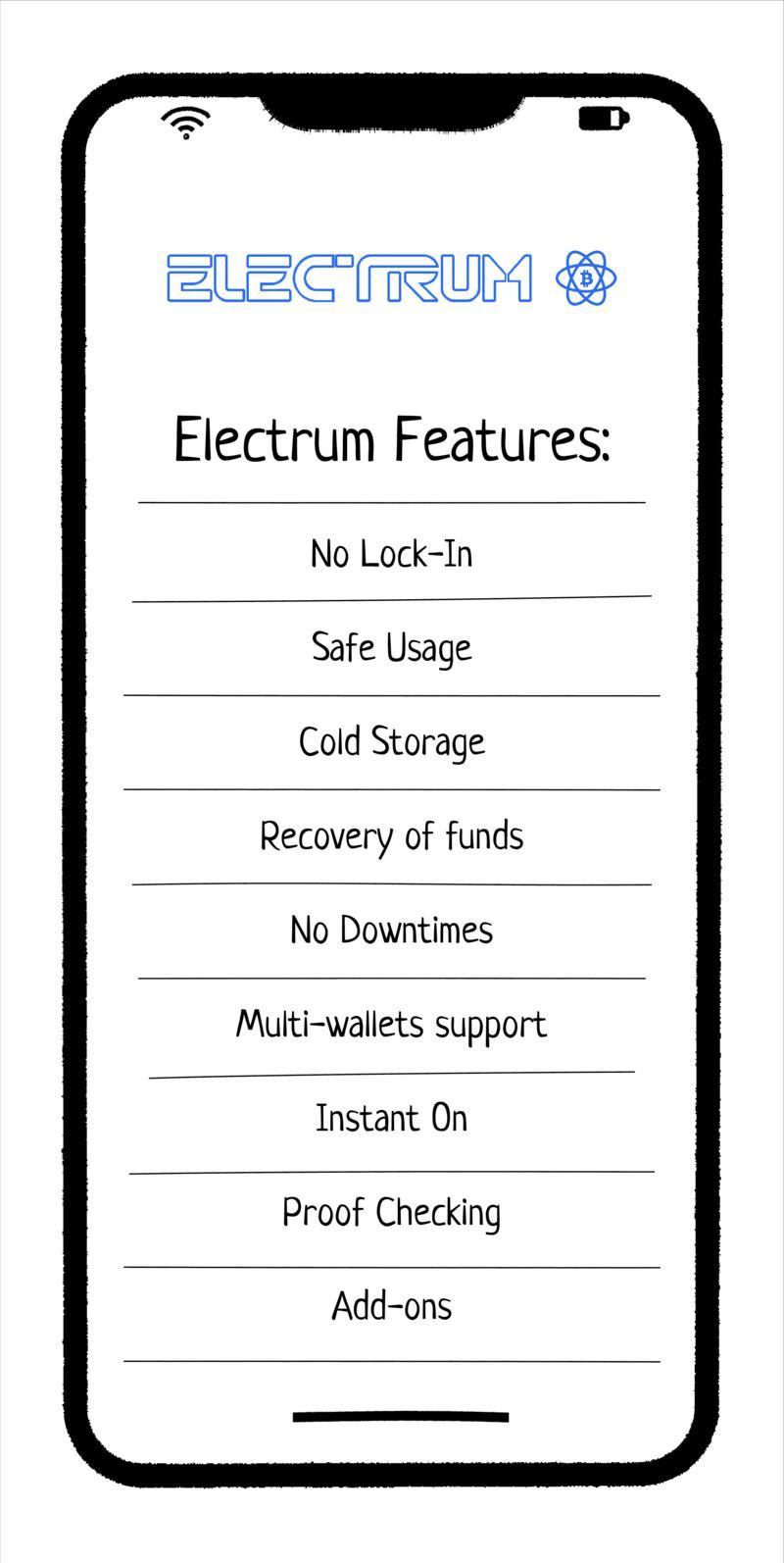 Electrum has been around for even longer than the Coinbase described above. It is one of the first services of its kind, which made it a pioneer and explorer of some sort.

Electrum was originally a 100% Bitcoin wallet, but today it supports more cryptocurrencies (mainly thanks to the efforts of the developer community, since the current version of Electrum is open-source).

Electrum has its pros and cons, and we'll discuss them at length below. For now, let's just say the service doesn't require a full blockchain download, which speeds up its operation (while private keys are stored on the user's side). On the other hand, the Electrum UI isn't very creative. The wallet is completely focused on performing its main functions, whether it is sending bitcoins or accessing the history of transactions. The design wasn’t given much attention, so it remains minimalist.

Electrum appeared at the beginning of winter 2011 and was a real discovery. Before it, there were no services, which allowed storing bitcoin without fully loading the blockchain, so success was inevitable. Quite rightly, Electrum had become one of the best Bitcoin wallets (and is still very popular). Especially since there was almost no competition then.

There was only one cryptocurrency at the time, so it's understandable why the service was focused on Bitcoin. However, later the crypto portfolio was expanded.

Yes, today Electrum is considered a multicurrency service… but there are some nuances you have to know.

The fact is, each Electrum wallet works with just one crypto coin type. So the user has to create several cryptocurrency wallets if he's dealing not only with bitcoin.

Now you understand why there are users who believe in Electrum being the best crypto wallet app. But it has disadvantages too, and we'll discuss them now.

The creators of Mycelium presumptuously call their product the default Bitcoin wallet. Well, the service is really pretty good: it's easy to use and offers a lot of cool features. But the default product label is a clear exaggeration.

At its core, Mycelium is an Android and iOS application. Some people are frustrated there is no desktop version, but we have a simple explanation. The thing is, developers had no intention of creating desktop and mobile wallets, their task was a product, which is always at hand and can be used on the go. And they reached the target.

The Mycelium company appeared back in 2008. And at first, crypto wallet apps weren't even on the table, so to say, and the team developed another network project. However, a few years later (more specifically, in 2012) they decided to delve into bitcoin technology and create a special ecosystem for working with this cryptocurrency.

They developed a mobile wallet, which became very popular among bitcoin owners. This is how the success story of Mycelium began. 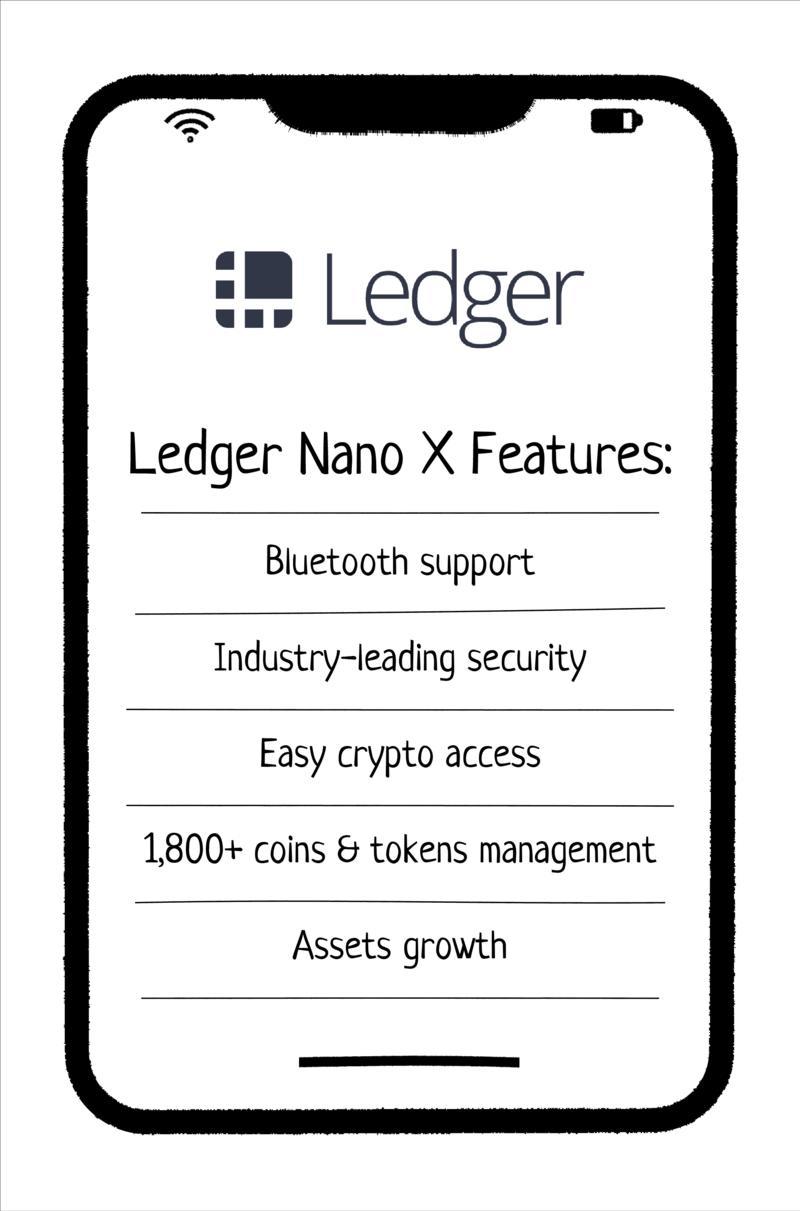 We managed to discuss different types of crypto wallets and provided you with a few real-working examples. But all of them are hot wallets, and now it's time to give you an instance of a cold (hardware) one.

So, we bring to your attention the Ledger Nano X hardware wallet, a new model of the famous French manufacturer (Ledger SAS).

If we compare Nano X with previous similar products from the company, we can say that it is improved with several cool features. These include, among other things, Bluetooth support, a better display, and more memory (simply put, it becomes possible to download more crypto wallet apps to the device).

How to use Ledger Nano X?

Yes, hardware services are considered the safest Bitcoin wallets. However, in the case of Ledger Nano X, the Bluetooth feature should also be taken into account. On the one hand, we get greater usability of the device, on the other hand, Bluetooth exposes the wallet to additional cyberattacks (more truly, we increase their likelihood).

Crypterium is a very interesting and original product. In essence, it combines a mobile wallet and a digital bank analog. The company itself says the same on its website.

Crypterium is definitely a worthy addition to our list of the best Bitcoin wallets. But let’s discuss it in greater depth.

Crypterium has been around since 2017. Originally, the company intended to create a dedicated crypto-banking platform. It was supposed to offer financial services in a banking style, with the difference that cryptocurrency was used instead of the usual one.

The company has since released several related products, including a digital wallet and a special card.

Crypterium is one of the best crypto wallets, at least when it comes to the internal app structure. The point is, it ideally combines functionality and safety of use, and such a balance, believe us, isn’t easy to achieve.

Crypterium has a lot of advantages (see the pros list below), one of which is the chance to get the Crypterium crypto debit card of the same name. This card can be used to pay with it in everyday life.

The service doesn't have too many drawbacks. According to the complaints of some users, the app lacks an account saving feature. In addition, the low transaction limit is causing people's frustration.

If you want to create your own digital wallet, our complete guide on the topic will provide you with a couple of useful tips.

They say the Crypterium service with its crypto cards is able to replace the well-known Visa and Mastercard products. Well, let's wait and see.

This is the end of our list of the best Bitcoin wallets. It remains to discuss Coinomi, a simple multi-currency service.

Coinomi is a handy mobile wallet. At first, it worked exclusively with the Android platform, but later its creators released iOS and even the desktop versions.

Coinomi was launched in 2014. The company that released it is registered in London, but the service works everywhere (or next to everywhere).

Of course, in those days, other similar services already existed, but the future creators of Coinomi were unhappy with them. The market needed a better solution, and the company was ready to do its utmost to provide one.

The path to success was rather rocky. The problem was the limited budget of the company, which forced its founders to save on marketing activities. And the lack of high-quality promotion of a new product led to its low demand. Users just didn't know there was a new wonderful crypto wallet!

Haven't found your perfect wallet? Then we invite you to create your own! It’ll fully meet your requirements and wishes.

Our experts have vast experience in developing various types of crypto wallets. And we're happy to help you with your project too.