Blockchain In Business: How Blockchain Technology Can Support And Improve Business

The blockchain has been known for a long time, but 2020 has shown its especially rapid development. It was the very year when various businesses began to use blockchain-based applications more willingly and achieved good results. And, as judged from the latest forecasts, the trend is expected to continue for the coming decade.

Such an onrush of blockchain technology was caused, at least in part, by the pandemic. Forced to social distancing, we're actively developing new digital solutions to make our online existence as comfortable as possible.

But why is blockchain so interesting? The point is, it offers a unique way of storing and transferring confidential information and allows managing things without intermediaries. So there is an excellent opportunity to make your business more profitable and productive. And it's not just about cryptocurrencies! Blockchain permeates various areas, including the economy, financial market, corporate culture, and so on.

Of course, the blockchain took some time to win our trust. It didn't happen right away. At first, we had our concerns and doubts. Fortunately, everything has changed, and today the largest companies around the world are using this technology to improve their processes. Among them are such bright names as Amazon, Microsoft, Walmart, PayPal, DISH Network, and other leaders of different markets. Their example proves that an innovative business built on blockchain technology has all the chances of faster success.

Interested? Then let's discuss the topic at length. We'll describe top blockchain benefits and its best usage areas. You're going to learn what you need to know when implementing blockchain-based systems; as a result, you'll be able to create your strategy with greater insight.

And of course, we’re always happy to help you and answer your questions if you have any. Just contact us when you feel like it.

The world first heard about the blockchain in 2007, when a new digital signature method was announced. Its essence was in reducing the risk of fraud and theft and speeding up transactions.

Initially, the blockchain was associated only with bitcoins, and no one assumed any other technology use. But almost ten years later, in 2016, people started talking about the Internet of Value. The concept was suggested by Don Tapscott, founder of the Blockchain Research Institute, during a TED Talk interview. In his opinion, most physical assets can be turned into digital ones and managed in the same way as we do with Bitcoin (using the blockchain, of course).

In a sense, he turned out to be a prophet... and his predictions keep coming true. However, we guess it's better to discuss the future of blockchain technology a bit later. We'd like to start simple (with some basics, so to say).

What is the Blockchain concept based on?

Blockchain has a speaking name, which explains the whole concept in itself. In simple terms, we’re dealing with a chain of blocks built according to certain rules. It is a special and highly secure system, which automatically records and verifies incoming digital transactions.

Imagine a series of computers connected to a single network. Each of them is protected separately, and each has blockchain software installed. So every member of the network (the owner of the computer) is somehow responsible for the safe and reliable system operation (at least, to some extent). These network participants are equal, and they willingly interact with each other to achieve an excellent result (and they do achieve it).

Let's give a couple of definitions to make things clearer (as to the benefits of blockchain technology for business, we'll discuss them later):

Is it only about Bitcoin?

When we hear about blockchain, the first thing coming to our mind is bitcoins. Or, at the very least, any other cryptocurrency.

“But my company doesn't work with cryptocurrency!” - you may object to us. - "Does it mean I cannot enjoy the benefits of blockchain?"

Indeed, the blockchain was originally focused on bitcoins... however, the situation has changed over time. And today any type of physical asset can be digitized, including art, precious metals, and property. Moreover, we're even converting contracts, personal customer data, any confidential information into a manageable digital form! All we have to do is use the so-called “tokenization” procedure.

Simply stated, we turn the said assets into tokens and put them on the blockchain network. When it's done, we're free to manage them as needed (by analogy with cryptocurrency) and conduct various kinds of digital transactions.

What's so special about blockchain technology?

Information isn't stored on one common server, it is distributed among networked computers. And the whole registry is being updated every time a new block of data appears. This explains why the blockchain approach is considered so reliable and secure: hacking all computers at once is an extremely difficult, close to impossible task.

Besides, the blocks are additionally protected with innovative encryption (each of them is protected separately). And only the user who owns the secret private key from a particular record has access to a certain block.

How Does It Work?

We're going to look at how blockchain works using a cryptocurrency transaction as an example. But the same algorithm is at the heart of any operation related to blockchain tech. A cryptocurrency-related instance is just clearer (and easier to grasp). 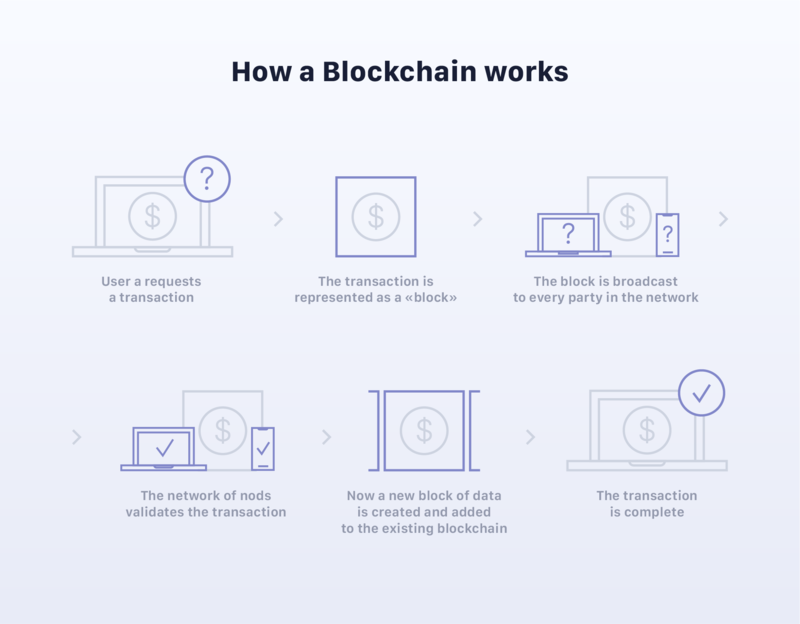 Of course, the above principle of operation gives only an approximate and rather rough understanding of the stages of a blockchain transaction. But we hope you got the idea. It's more than enough to start using blockchain technology. 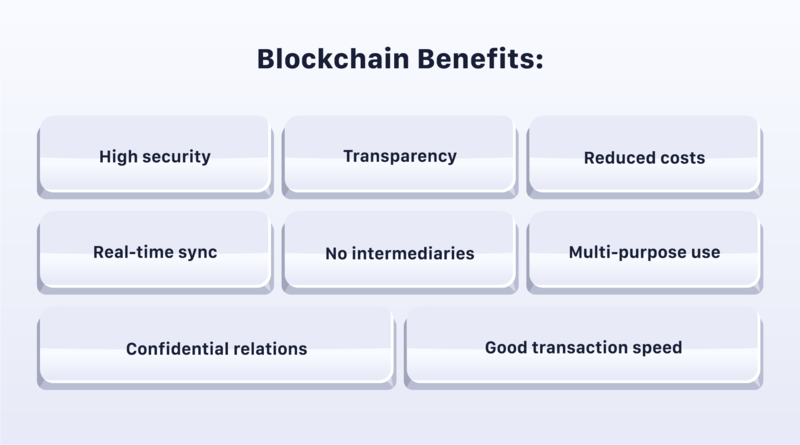 We've listed top blockchain benefits, and they're truly impressive. But any system has not only pros but also cons. How about them?

However, the disadvantages described are temporary. The future of blockchain technology looks bright, and these problems will soon be resolved (no doubt about that!).

They say all sorts of crazy things, tales, and fables about blockchain... let's discuss the main myths and legends and try to separate the wheat from the chaff.

How to Apply Blockchain Technology To Your Business

Do you often deal with cryptocurrency? We’ll gladly share our experience with you and tell you which crypto wallets are the leaders on the market today.

Now let's talk about in which industries the idea of implementing blockchain-based systems would be especially beneficial.

We promised you real usage examples, remember? Here they are then!

Consulting company Accenture researched the blockchain market and concluded that by 2025 the technology will have become an integral part of the global economy. Where does it lead us? What are the consequences?

Firstly, microtransactions will be available to everyone. Blockchain-based p2p lending systems will appear, allowing even small investors to participate in projects of interest to them. And these same p2p platforms will help businessmen with no budget of their own raise money for a startup in a  more easy way.

As another study (IBM Institute for Business Value) says, in the next few years, 85% of companies plan to start using blockchain technologies.

Do you want to be among these 85% winners and join the market leaders? Then follow their example.

Our experts would help you find the best way to apply blockchain technology to make your business stronger. Looking forward to your requests!