What's the Difference Between AR and VR?

Do you ever wonder why Mark Zuckerberg is investing in VR or why almost each social network tries to launch AR services? Let’s find out if we should pay attention to these things and, furthermore, start using them. We are going to determine what VR and AR are and then compare them.

VR is an abbreviation of virtual reality, which is created with the help of technical means. A person sees a completely different world, the immersion in which is provided through vision, hearing, sense of smell, and so on. It's all about imitations.

AR (augmented reality) is a technology, which brings something new to the real world or, vice versa, removes some things from it. One example is you launch an app on your smartphone and see animals playing in your flat.

The development process started in the 50s of the last century and, despite it, the prevalence of VR is unsatisfactory. The first VR helmets were presented by Philco Corporation in 1961. However, today they are considered more like AR helmets.

Morton Leonard Heilig is the father of the VR industry. He created the first in the world simulator Sensorama – a bulky device, which immersed people in virtual reality.

Popular VR things are the following:

The virtual reality suit guarantees a sea filled with emotions. You are going to be taken to whenever the computer wants: the outside world is replaced with a virtual one. The suit is equipped with an LCD or OLED display, an acoustic system, and other things, which create an illusion of touch and wind.

Because of the cost of a VR suit, VR headsets, glasses, and gloves are being used more often. After a person puts them on, he sees only a virtual world. Gloves with embedded sensors read the movements to transmit them to the character on the screen. This means the headsets don't just detect the direction in which you're facing, but any movement you make in those directions.

Of course, not all solutions have such features. To test some of them, you need to buy simple VR glasses or a helmet.

Furthermore, VR opens up wide opportunities for studying. Fascinating classes in history, geography, and other subjects are possible.

As we said before, VR replaces your vision while AR complements the real world. Most solutions require a smartphone, but glasses may be needed as well. It is important to note that with AR glasses you can see the world around you.

Well. Let’s take a look at some use cases.

Of course, we can’t help mentioning the masks in different social networks and apps. It is also an AR technology.

Perhaps, in the near future, we’ll be able to quickly search and see information in front of our eyes with the help of AR glasses.

VR is a technology with awesome use cases. It replaces your surrounding world with a new fictional one. There are no restrictions and limitations – you are able to choose where you want to be present. However, you are totally controlled by the system.

This technology is going to transform industries, but currently not every user and company is ready for it. The first reason concerns the devices (their accessibility for mass users). The second one has to do with the network bandwidth. Current mobile networks cannot withstand the load. That’s why 5G has been developed. 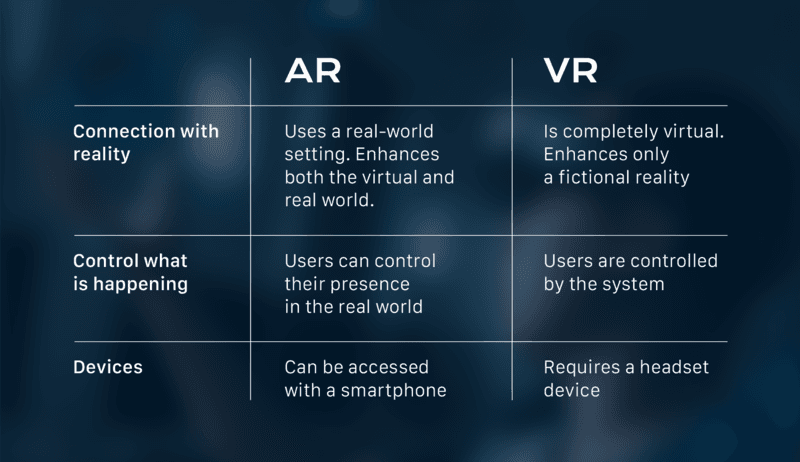